Home » Soccer » ‘I move on quickly’: Rugan ready to welcome back Burgess to the Western fold

Western United's wantaway forward Max Burgess will be welcomed back to the club with open arms despite his refusal to return for pre-season training and the kick-off to the new A-League season.

Burgess remained with his family in Sydney after the last A-League season finished for Western late in July and made no secret of the fact that he wanted to stay in NSW to play for a local team rather than see out the final year of his contract with the Victorian club.

Western coach Mark Rudan says that the footballing "refusenik" will be a welcome addition to the squad once he gets back to training and attains match fitness. 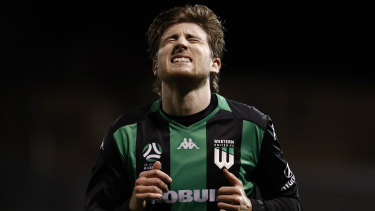 But Rudan, who was the coach who rescued Burgess when the former Sydney FC and Newcastle player appeared to be headed down a career cul-de-sac, admitted that the skilful attacker's behaviour had left an empty taste in his mouth for a while.

"For me personally it's disappointing, I have a personal relationship with Max, I have got a lot of belief and trust in Max," Rudan said when asked about the Burgess stand-off following his team's season-opening goalless draw at home to Adelaide United.

''I took him out of the NPL and brought him with me to Wellington (where Rudan coached in the 2018-19 season and Burgess rehabilitated his career) and he wanted to come with me to Melbourne (when Rudan quit the Phoenix and opted to take post as Western's first coach in the 2019-20 campaign).

''I was more than happy to have him with me as well.''

However, Rudan believes there is no point in crying over spilt milk.

Western's management refused to budge on the contract issue and were prepared to let Burgess, who turns 26 in January, miss a year of football rather than let him walk away.

Now Burgess will return to Victoria after he has completed his time in quarantine, although he will take time to get up to the required fitness levels to have the influence he did in the final weeks of last season when he linked to telling effect with Alessandro Diamanti.

''I move on quickly. There's no point in harvesting any disappointment or anger, it does no good to anybody. I could completely understand where he was coming from. It's a conversation we had, you have to," Rudan said.

''The club made a decision, they were going to hold pretty firm on the contract situation. We gave him all the support he needed back home, making sure from a psychological aspect he had all the necessary requirements he needed to make sure he was in a good head space as well.

"The most positive thing is that Max is back."

The coach said that on balance a point apiece was a fair result from the opening night 0-0 result against Adelaide, although he sees it as a missed opportunity for his team.

"I felt it was two points dropped because we are at home and they are a youngish side. But look at the positives. We got through unscathed with no injuries and zero goals conceded."