Bernie Ibini has hit back at accusations from Newcastle Jets chief executive Lawrie McKinna that he was “taking the piss” by using mental health issues as an excuse to get out of his contract to join A-League rivals Western Sydney Wanderers.

Ibini said he was now in a “happy environment” after signing on with the Wanderers, having finally succeeded in his two-month battle for a release from the cash-strapped Jets. 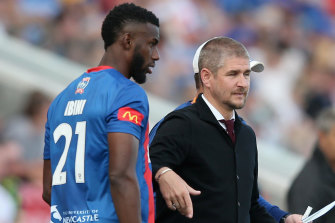 Bernie Ibini and then-Jets coach Carl Robinson, who he is set to follow to the Western Sydney Wanderers.Credit:Getty

The move reunites the 28-year-old with coach Carl Robinson, who brought him to Major League Soccer club Vancouver Whitecaps in 2017 and then again to Newcastle earlier this year.

McKinna said in a statement that the Jets only wanted players “who want to be here and play for the jersey”, having brokered a deal with Ibini to personally pay out the remainder of his contract in exchange for permission to leave.

But footage has since emerged of a presentation McKinna gave at a men’s health luncheon run by the Maitland Business Council in late November, in which he spoke about the Ibini saga in far greater detail and described the twice-capped Socceroo’s conduct as “disgraceful”.

“It’s unfortunate that Lawrie chose to comment on my situation in such a manner in a public forum, but I’m now in a happy environment and look forward to the season ahead,” Ibini told the Herald in a statement.

“Lawrie knows exactly what went on during my time in Newcastle, as does the PFA [the players’ union]. That period is now behind me and I look forward to playing at the Wanderers this season.”

Ibini had been agitating for a release from the Jets almost from the moment Robinson quit the club to move to Western Sydney. Sources say his contract with Newcastle did not include a clause permitting him to leave if Robinson was no longer coach, which are commonplace in the A-League.

Ibini’s agent, James Hardy, told SBS that the uncertainty around the club’s ownership situation was “mentally, emotionally and physically” draining for the winger, and that he was personally “concerned for his welfare as a human being.”

At the luncheon, McKinna expressed his doubt over Ibini’s mental health claims. 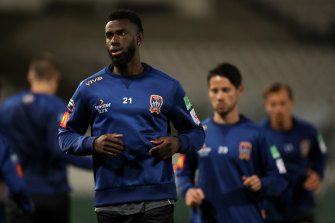 Bernie Ibini has been capped twice by the Socceroos.Credit:Getty

“We have to recognise mental health, that it’s an illness. But when people take the piss, it’s wrong, because it affects so many people and so many families, because it’s real,” McKinna said at the event.

“It’s disgraceful … these guys are getting a contract and then they can rip it up when they want. There’s certain agents in the world who are advising people to use that mental health thing and I think that’s disrespectful to anybody who suffers from anxiety, depression and stuff like that.

“That’s bullshit what he’s done. I can’t wait until he’s away from this club and out the place because you don’t want f—ers like that in Newcastle representing the club.”

McKinna said after Ibini’s initial request for a release was denied, he took 10 days of paid leave as permitted in standard A-League player contracts.

“After that you can stand him down without pay. So we got the doctor’s certificate through – an online doctor diagnosed him with mental health stress, that he couldn’t train,” McKinna said.

“So we said yep, no problem … then we stopped paying him, because the PFA said stop paying him now. His mental health issues disappeared.

“All of a sudden, he was healthy, he was back at training, training like a busted arse – going through the motions.”

Ibini’s shift continues a flurry of transfer activity from Western Sydney, who signed James Troisi on Wednesday after his ugly split from Adelaide United, and also announced on Thursday the signing of defender Ziggy Gordon from the Central Coast Mariners.

All three players were under contract at their previous clubs. Current A-League rules do not permit players to transfer directly from one club to another, which is why they had to seek releases from their contracts to take up rivals deals – although that will change next year when Football Australia introduces a domestic transfer system.

Gordon had only signed a contract extension with the Mariners in October, and said at the time he’d “never felt so welcome at a club”. Then the Wanderers expressed their interest in him.

“I know the plan for this club, I know the plan from Carl and the staff, and it’s really exciting. I’m a winner and I’ll never apologise for it. I want to be amongst other winners,” Gordon said.

The Jets, meanwhile, have still not installed a permanent replacement for Robinson, with the club set to be saved from financial oblivion by a group of rival A-League club owners as part of a “safety net” fund first reported by the Herald.