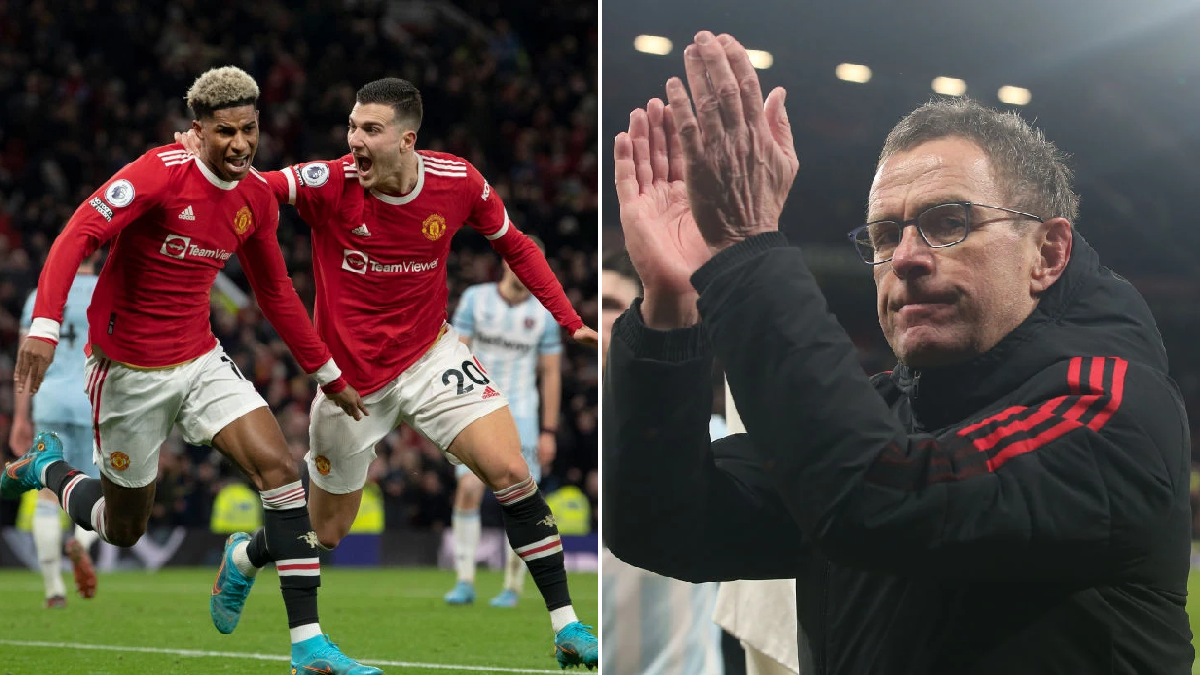 Ralf Rangnick was thrilled to see Manchester United snatch all three points late on against West Ham on Saturday and lauded his defence, but he still feels the side need to improve in possession of the ball.

The Red Devils appeared to be heading for a goalless draw at Old Trafford until Marcus Rashford tapped in fellow substitute Edinson Cavani’s superb cross in the 93rd minute to secure a 1-0 win with the last kick of the game.

United have now moved up to fourth place in the Premier League table, leapfrogging West Ham in the process, in what could be one of the defining results of their season.

While Rashford will grab the headlines, it was United’s defenders who really impressed Rangnick, though the German coach was not totally enamoured by his side’s work with the ball and feels that is the next step to improve.

Asked if that was the most controlled performance of his reign so far, Rangnick told MUTV after the match: ‘Well defensively I would say yes, because from normal play we didn’t allow them too many chances.

‘And as I said, it was not easy against them, they are a very physical team.

Rangnick also felt his side could have showed more cutting edge, telling BBC’s Match of the Day: ‘We didn’t always find the best solutions in the final third.

‘In the last 20 minutes we had too many shots on goal when there was no realistic chance to score. We needed to be a bit more patient, but in the end it was about taking all three points.’

Expanding on the performance of his defence, Rangnick continued: ‘As I said, we didn’t allow them [many chances], I can only remember one good chance they had after the corner kick five minutes from time.

‘But from normal play, from normal build-up, I don’t remember any situations. We had I think two or three good ones, especially with Fred, the header from Cristiano in the first half. But it was a very competitive and very disciplined game.’

Praising the defence even further in his post-match press conference, Rangnick added: ‘Defensively our best performance of the last eight weeks. Our counter-pressing, trying to win balls back, physicality was outstanding.’