Phil Foden is Manchester City’s TOTAL FOOTBALLER: First out and last in at training, he scores goals, makes goals and plays anywhere… the street player and boyhood fan has made it big

There was always one out on the luscious grass of Barcelona’s Ciutat Esportiva Joan Gamper before the rest. Without fail, Xavi would be there early before each training session. Juggling a ball, little feints and Cruyff turns alone while waiting for his team-mates to saunter out.

Players joined in dribs and drabs. The ball started to zip about between Xavi and whoever might be next, then another and another. Passes became quicker. The morning’s tempo was set. That always started with Xavi, every single day. A man after Pep Guardiola’s heart.

Guardiola has noticed the exact same trait in a young man at Manchester City. Phil Foden is their first out, last in merchant. 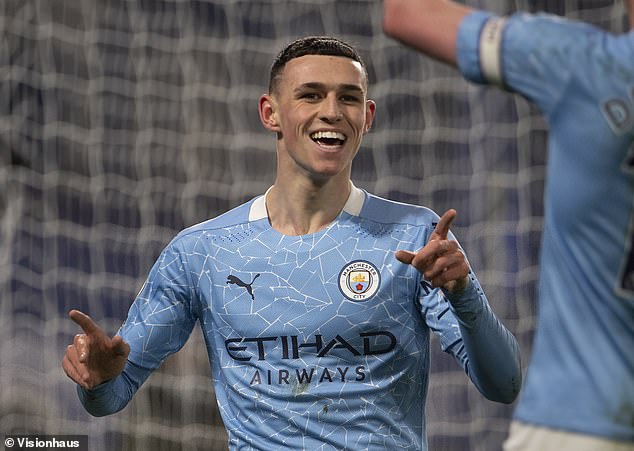 When City’s squad amble out onto the pitch, they know Foden will be waiting. Long after they are supposed to have returned inside, coach Lorenzo Buenaventura is often telling Foden – alongside a couple of others – to stop practising and get showered. Save your legs.

They describe it as a natural love for the football and maybe that is cliché but as one source said: ‘You might think all the players have that but it’s not true.’ The street footballer, the boyhood fan, has made it big.

A damn fine midfielder, too, and one whose influence on this team is growing with each passing week. Nobody, not even Ruben Dias, played more than the 700 minutes afforded to Foden last month. His 14 goal contributions – nine goals, five assists – are bettered only by Raheem Sterling and Kevin De Bruyne. 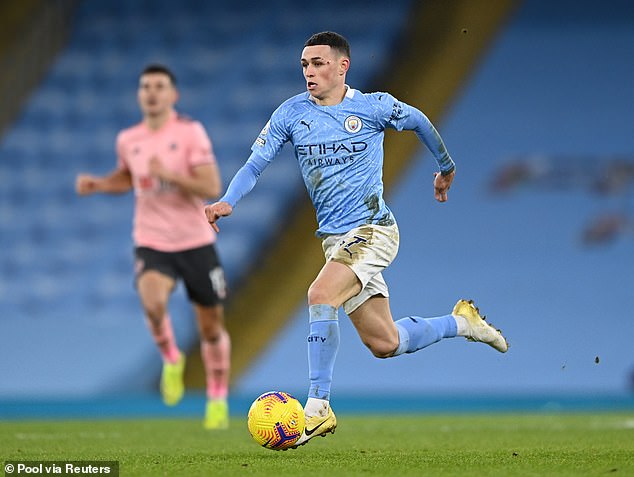 The way he glides through games, bouncing off defenders despite his slight frame, all seems so effortless. Witnessing a Foden slalom from deep, shimmying past challenges, is one of the Premier League’s great pleasures.

Those sort of moments have led to Gary Neville and Alan Shearer comparing him to Marc Overmars and Paul Gascoigne. Guardiola, for his part, wants absolutely no mention of any star, past or present, in a conversation about Foden.

The City manager has been criticised for holding him back but believes he will be vindicated by a slowly, slowly approach that actually now feels at odds with the fact that the 20-year-old broke the century appearances barrier last week.

He wants to shield him from expectation, although has realised the fraught complexities of that in a country desperate for their next megastar. And, perhaps more pertinently, an awakening that City are a better team with Foden in it. 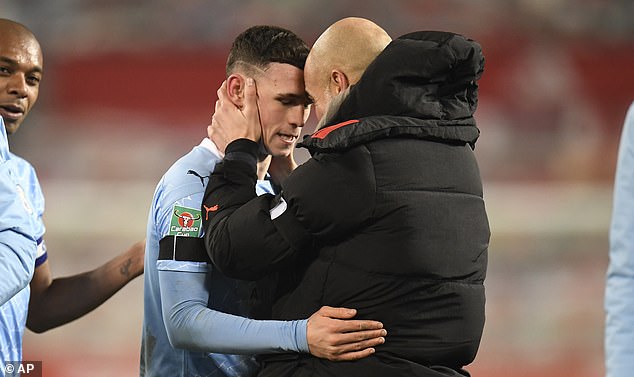 They are back at Anfield on Sunday and there was serious deliberation about throwing Foden in there last season, only for him to remain an unused substitute and Liverpool eventually running out comfortable 3-1 winners.

City barely laid a glove that day. He was exceptional in the return game, during Project Restart, scoring as Jurgen Klopp’s side – crowned champions days prior – were dismantled 4-0. It would be an almighty shock if he were not in the starting XI again after sitting out Wednesday’s canter at Burnley.

Foden – who wears the No 47 in tribute to his late, City-supporting grandfather – was earmarked to take David Silva’s midfield link spot but has increasingly found himself out wide. There will be countless reasons for it, two being that formations have altered this year and Guardiola wants the England international as close to the opposition’s box as possible.

He labels it as a sense, a smell, words delivered emotively with thumb and middle finger tapping each other. Another is that they view Foden as a ‘complete’ footballer, capable of affecting matches anywhere until nailing down a permanent position, which must surely be central.

Guardiola can constantly be heard instructing him to hug the touchline on the left, knowing that his precision of movement can render full backs’ positioning useless. Over the coming months, Foden will score plenty akin to his first ever City goal – away at Oxford United in the Carabao Cup three years ago, cutting across a pass from left to right into the far corner. 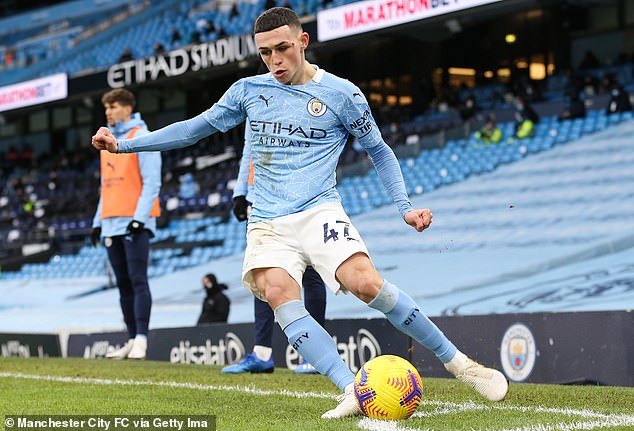 What strikes those around the first team is the care with which he treats the football. A first touch that a few around the club – who have seen all the greats up close – maintain they have rarely observed. ‘Only a small number of players can always push the ball in the right direction while choosing the best option the majority of the time,’ one said. ‘Phil has that.’

The care, and overwhelming desire to impress, has impeded him sometimes and that felt apparent in the weeks after being sent home from his first England camp, an incident for which he has shown remorse.

Foden briefly became risk averse, too focused on not making mistakes in possession. His team-mates noticed, Kevin De Bruyne tersely telling him to buck up during a routine Champions League home win over Olympiacos. It felt a little harsh at the time, yet De Bruyne knows how good Foden is and demands the best.

What has followed since is an accelerated rise. Foden, who now recoils at the notion of being praised merely as a youngster doing well, is becoming integral and the work done behind the scenes is bearing fruit.

Employing elite middle distance running coach Tony Clarke from Liverpool Harriers has enhanced his biomechanics, with constant analysis of arm and leg movement after every match. His running style is perfectly honed. 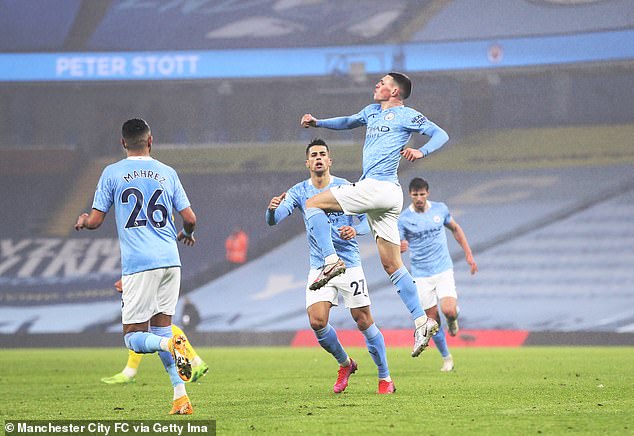 Two key examples of his stature have arrived over the past few weeks. Guardiola was asked about him after City had beaten Arsenal in the Carabao Cup. Previously he has talked Foden up – ‘the most talented player I have ever seen’ – but not there are the Emirates.

‘Phil wants to beat the world, he wants to eat the world,’ Guardiola said. ‘He has an incredible energy but in the final decision, the final pass, he has to slow down a little bit.’

The Catalan’s usual mantra is to only offer public insight on player improvement when he knows the individual can both handle it and that they are performing well in the first place.

The second was the difference in night meetings with West Bromwich Albion. In December, Foden was hooked after suffering a series of robust challenges during a frustrating 1-1 draw, clattered at every opportunity. Last week, with City 4-0 up at the Hawthorns, he was pulled off again. Why? Guardiola was saving his legs for the weekend. Just as Buenaventura attempts most days.