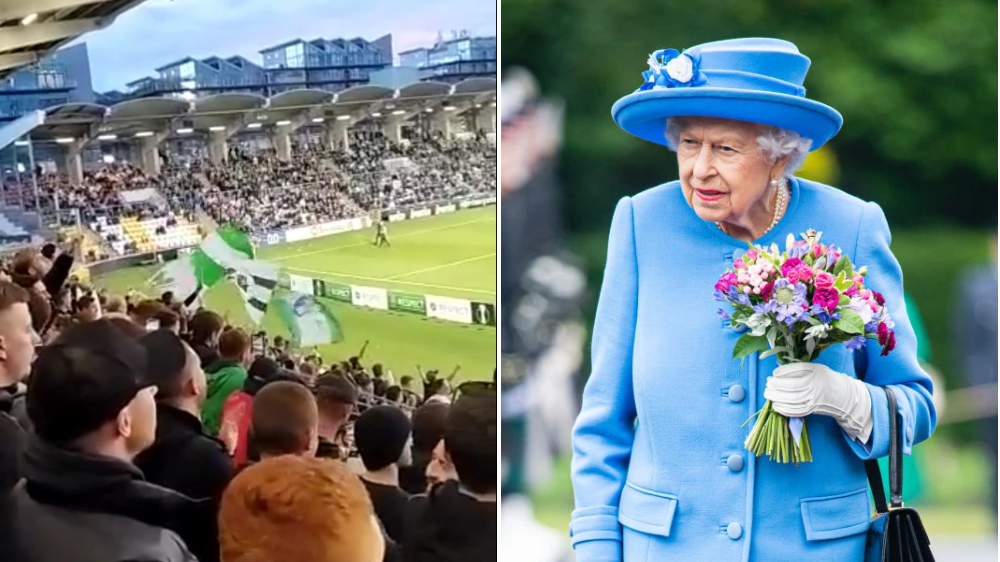 Shamrock Rovers supporters celebrated the death of Queen Elizabeth II by singing ‘Lizzie’s in a box’ during their side’s Europa Conference League game in Dublin on Thursday evening.

The Irish club were playing Swedish side Djurgardens in Europe’s third-tier competition at the Tallaght Stadium.

But just hours after Buckingham Palace had announced that the Queen had died peacefully at Balmoral, Shamrock Rovers fans were videoed inside the stadium singing ‘Lizzie’s in a box’ to the tune of the KC & the Sunshine Band’s song, ‘Give It Up’.

Shamrock Rovers have described the chant sung by a group of their supporters as ‘highly insensitive and callous’.

A statement from the club on Friday said: ‘Shamrock Rovers F.C. has been made aware of chants by a group of individuals at last night’s game.

‘Such highly insensitive and callous chanting is not acceptable at our club and is against the values that Shamrock Rovers F.C. stands for.

‘Our ground regulations issued on match tickets and on signage at entry strictly prohibit such activity.

Her Majesty Queen Elizabeth II has died after 70 years on the throne, with her death announced by Buckingham Palace on September 8, 2022.

She died at the age of 96 at her home in Balmoral, with her son, the now King Charles, and daughter Princess Anne by her side.

‘The following is also announced over the PA system before all of our games in Tallaght Stadium: “Shamrock Rovers Football Club welcomes all supporters to its grounds and condemns any form of bigotry and discrimination in soccer.

“Shamrock Rovers Football Club does not condone hostile abuse of individual players, spectators, or officials based on ethnic or cultural background, nationality, or religious affiliation. Those found to be involved in any such behaviour will face ejection from the ground and will be reported to the Gardai.”

Meanwhile, Ireland’s president Michael D. Higgins paid has tribute to the Queen, who was the first British monarch in 100 years to visit the Republic of Ireland since the nation gained independence from the United Kingdom.

‘During those memorable few days, the Queen did not shy away from the shadows of the past,’ Higgins said in a statement.

‘Her moving words and gestures of respect were deeply appreciated and admired by the people of Ireland and set out a new, forward-looking relationship between our nations – one of respect, close partnership and sincere friendship.’

Ireland’s taoiseach Micheal Martin described the Queen’s state visit in 2011 was ‘a crucial step in the normalisation of relations with our nearest neighbour’.