Nikita Rukavytsya is in line for his first Socceroos appearance in more than three years after coach Graham Arnold all but confirmed the red-hot striker would be in his squad when the Australian team returns to action next month.

Rukavytsya’s scintillating scoring spree for Israeli giants Maccabi Haifa has rocketed him into the global spotlight, with a run of form so good he ranks statistically as one of the most potent strikers in world football. 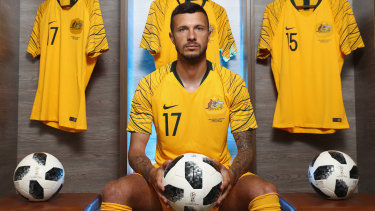 Nikita Rukavytsya’s blistering run of form in Israel is likely to earn him a Socceroos recall.Credit:Getty

The Ukraine-born, Perth-raised attacker has netted an incredible 38 goals in his last 53 games – including 16 in 17 outings this season, having scored a brace in Maccabi Haifa’s 3-0 win over Hapoel Kfar Saba on Monday.

A solid but only occasionally spectacular player in his A-League stints with Perth Glory and Western Sydney Wanderers, the 33-year-old’s late-career renaissance hit a new crescendo last month when he was voted Asia’s fourth-best player in a poll run by the Asian Football Confederation, in lieu of their usual awards which were scrapped because of COVID-19.

Last year, Rukavytsya had the longest unbroken scoring run in top-division football anywhere on the planet, according to the International Federation of Football History & Statistics (IFFHS), with a streak between August and December in which he bagged at least one goal in 13 consecutive games.

The IFFHS also rated him at ninth in their ‘World’s Best Top Scorer’ award for 2020, sandwiched between names such as Robert Lewandowski, Cristiano Ronaldo, Lionel Messi and Kylian M’bappe – incredible company for any player, let alone one with a CV as humble as Rukavytsya’s. 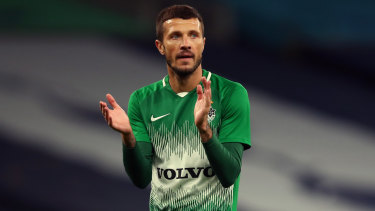 Nikita Rukavytsya is in his fifth season at Maccabi Haifa, but his last two have been truly exceptional.Credit:Getty

Arnold has been thoroughly impressed as he patiently awaits the end of what has been the longest break between matches for the Socceroos in more than 50 years, having gone through 2020 without so much as a training camp.

But Australia’s qualifying path for the 2022 World Cup in Qatar is finally set to resume next month with an away trip to Nepal, and Arnold said Rukavytsya – who last wore the green and gold against Honduras in November 2017 – was in the frame for a call-up.

“With COVID, there’s no guarantees with anything. But in a football sense, you look at how well he’s doing, and he’s on that list to be looked at,” Arnold said. “A kid that’s doing fantastic, got fourth in player of the year in Asia – we’re crazy not to look. I watch his games every week and he’s got a coach and a style that is fitting and suiting him exceptionally well.

“The reason why he’s gone to this other level is like anything – he’s at that age of maturity and experience. Now when he gets half a chance in front of goal, he’s calm, he’s relaxed and he just finishes it. When you’re a bit younger you have a rush of blood or you’re a bit more excited.

“He’s 33 years of age but he hasn’t lost one bit of his speed. If anything his touch has got much better, [as has] his awareness of his runs in the box.”

Rukavytsya moved to Israel, where his wife is from, after leaving the Wanderers in 2015 and spent a year with Beitar Jerusalem before signing for Maccabi Haifa. Now in his fifth season with the club, the Socceroo was reportedly in the process of obtaining Israeli citizenship several years ago.

“It’s a big thing for a player when they’re away from home, happiness off the field, and being settled in a stable environment. He is that,” Arnold said.

“He’s been at the one club for a number of years now, he’s a legend of the club. He’s a quiet kid, a great kid, he’s proud to wear that Australian shirt and he’s desperate to get back in it.”

The Socceroos are officially scheduled to play a home World Cup qualifier against Kuwait on March 25, but sources say that match is likely to be postponed until the June international break, because of difficulties getting players in and out of the country. The Nepal game, however, is a certainty to be played as slated on March 30, and travel exemptions from that country’s government could enable Arnold to call up a strong squad of overseas-based players.

Meanwhile, Arnold welcomed Mat Ryan’s loan move to Arsenal, with the Socceroo poised for his first minutes at the English Premier League club this weekend if he can recover from a minor hip injury in time.

Ryan missed Arsenal’s 2-1 defeat to Wolverhampton on Wednesday morning (AEST), when he would have been called upon after a red card to first-choice goalkeeper Bernd Leno in the second half.

Leno is now suspended for Arsenal’s next match on Saturday away to Aston Villa.

“I texted him this morning – he had a very, very small hip injury, so it made him not be on the bench … but the goalkeeper got sent off so let’s expect Maty to play this weekend for Arsenal,” Arnold said.

“It just shows you the respect Maty has in the UK and the EPL that a big club like Arsenal wants him to be part of the club. He’s got a chance of playing rather than being at Brighton where he was told he wasn’t going to be playing, and that gives the guy a lot of energy and renewed thoughts about moving forward.”