Football Federation Australia boss James Johnson has declared that all bets are off as far as Australian soccer is concerned, with he and his management team prepared to countenance all manner of changes to the way the game is run here in the wake of the coronavirus pandemic.

In a video broadcast on FFA's Twitter account for its new podcast, Johnson says bluntly: "It's all on the table." 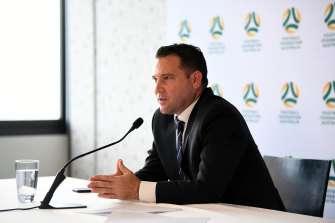 The CEO, who was appointed in January, has had to grasp an unprecedented series of challenges in his short time in charge. His most immediate concern is the faltering relationship with Fox Sports, the league’s broadcast partner, and whether the pay TV company will look to walk away from its $57 million-a-year deal to cover the sport if the A-League does not resume this season.

But Johnson is looking beyond that and to the future, saying he is prepared to look at a major shake-up to the game's structure and operation if that is what is needed for it to flourish in the different world that sport and business will operate in when the COVID-19 crisis has passed.

"The message from me is we are not alone in some of the difficulties Australian football is facing," he said, citing the way that mega clubs such as Barcelona and Juventus have had to cut player wages and trim costs.

"I worked at FIFA and have gone through my fair share of crises there.

"The lesson I learned was when you are faced with challenges we need to look at opportunities."

The lack of international fixtures for the rest of the year presents him with an opportunity to suborn one of the country's most experienced coaches, national team boss Graham Arnold, to brainstorm ideas to safeguard the Australian game's future, he said.

"We know there will be no national team football in June and July, those windows will be pushed back to the end of the year. I have asked Graham Arnold to work as a football advisor on football issues.

"We are going to get a whiteboard out and we will talk and debate about the real issues the game is facing, from transfer systems to pathways, to registration fees and competition structures.

As the game shuddered to a halt (the last A-League game was the closed-doors fixture between Newcastle and Melbourne City in March) there has been widespread debate throughout the soccer community as to how it can relaunch itself when a semblance of normality begins.

Many see the enforced shutdown as a great opportunity to reset the entire sport, bringing in a second division and promotion and relegation.