Celtic defender Jack Hendry has questioned whether he was given a “fair opportunity” at the club before reigniting his hopes of a Scotland recall with an impressive loan spell in Belgium this season.

Hendry, who played in Celtic’s academy before re-joining the club under Brendan Rodgers in January 2018, managed 27 appearances over two years for the Scottish Premiership side before being loaned out to Australian side Melbourne City in January 2020.

A knee ligament injury limited him to two games Down Under, and unable to impress Neil Lennon at Celtic ahead of the current season, he embarked on another loan, this time to Belgium top-flight side KV Oostende.

The 25-year-old has established himself with the Belgian side, who have exceeded expectations by contending for European qualification, sitting fourth – just two points behind second-placed Royal Antwerp – after 29 games. 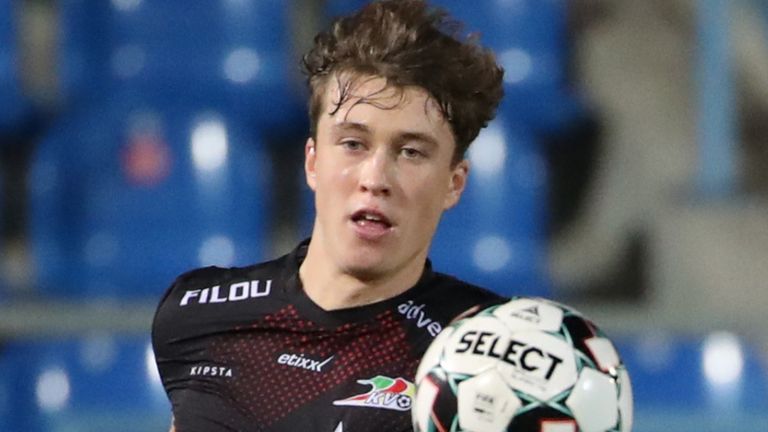 Meanwhile, Celtic are on the brink of relinquishing the Scottish Premiership title to Rangers for the first time in 10 seasons, with manager Neil Lennon having resigned in February.

“Obviously maybe a wee bit disappointed on how it panned out, but first of all, I’ve got to look at myself about that, on how that happened and how it didn’t quite work out the way I wanted it to.

“But at the same time you’ve got to obviously ask questions like, ‘did I get as fair an opportunity as maybe I should have?’ These are obviously questions that in hindsight you can always look at, but in the moment I needed to look at myself, and I did.

“I think coming back this pre-season, I needed to kick on, I needed to do something with my career because it was just potential, and I felt when I went to Celtic it didn’t materialise the way I wanted it to, and I was really determined to go and show people I was a good footballer and I was at that club for that reason.

“Watching from afar this season it’s not been easy to watch, because obviously it’s been a difficult season for themselves, and of course the way that I’m playing at the minute I think I could have had a real good impact on the side.

“With the tough years that I did have at that club, it’s made me a lot mentally tougher, I think it’s made me a better person and I’ve come through the other side of it and now having a good run of games together, I want to play at that level again, I want to push myself, I just feel that I needed my confidence back and my mojo back.”

‘I have the ability to play for Scotland’

Having impressed at club level upon joining Celtic in 2018, Hendry was included in several Scotland squads and given three international appearances during that calendar year but hasn’t returned to the squad since.

Steve Clarke, who has been linked with the Celtic job since Lennon’s departure, took over the national side in May 2019 and has guided them to this summer’s European Championships, and a recent change of system has given Hendry renewed hope of a recall.

The three-man central defence Clarke has employed mirrors the system Hendry has flourished in during his time in Belgium, and the centre-back is hoping that his performances have caught the manager’s attention ahead of World Cup qualifiers against Austria, Israel and the Faroe Islands later in March.

“I think it really suits my style of play, playing in a three,” Hendry said. “I feel that I can play right across every one, so whether it’s the left, middle or the right – just the way that I play I feel that it’s a really good position for myself.

“I feel that I could add value and I’ve been working very hard during this season, in the off-season, to put myself in a position where I could possibly say to myself that I might be worthy of it.

“I know that I’ve still got a really long way to go to reach my best, it’s just obviously beforehand maybe I was potential and it’s turning that potential into reality, and showing people how good a person, first of all, I am off the pitch, but also how good I am on it with football.

“So I think playing with a three at my club hopefully helps me with that international scene because it’s something that I’m striving towards.

“It was my biggest achievement in my career so far playing for Scotland and I’m desperate to pull that shirt on again because, obviously I’m a proud Scotsman, and it’s something that doesn’t come around often and you’ve got to make the most of it when it does come around.

“One of my goals this season was to get recognised on the international scene again. I feel that my ability can more than handle that level and I feel like I’ve shown that at Oostende.”