The Colombia winger was a doubt for last weekend’s visit to Southampton but ended up playing from the start as the table-topping Toffees were beaten 2-0 at St Mary’s for their first defeat of the season.

Rodriguez, who has scored three goals in seven appearances since joining from Real Madrid in the summer, is however expected to be back in contention for selection ahead of next Saturday’s game against Manchester United.

“He has played all the [Premier League] games, he had a little problem so he needs to rest for this game and he will be available for the next game,” Ancelotti said.

Everton will also be without injured club captain Seamus Coleman, while Richarlison and Lucas Digne are absent through suspension.

But defensive duo Jonjoe Kenny and Jarrad Branthwaite are available for the game at St James’ Park, which is live on Sky Sports Premier League.

The defeat against Southampton ended an eight-game unbeaten run in all competitions for Everton and Ancelotti is determined to ensure his side avoid a repeat performance. 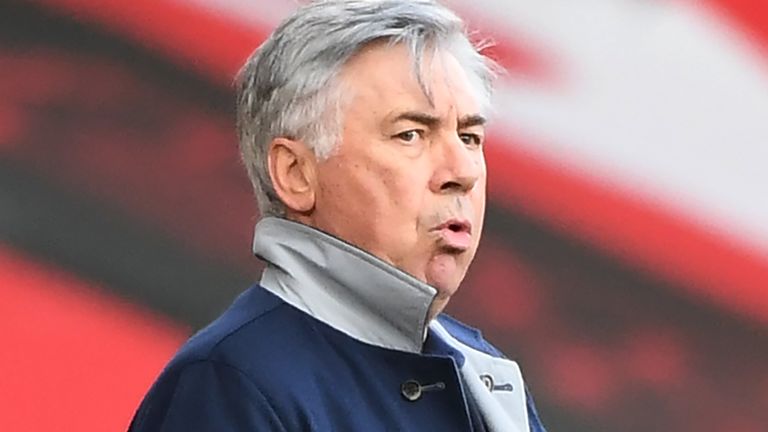 “It was not a good day, we have moved forward. It is important, we want to stay at the top of the table if possible, playing against Newcastle is always difficult,” Ancelotti said.

“We are focused, the spirit is good and we have confidence for the game.”

Everton beat Newcastle 2-1 in the corresponding fixture last season, in Ancelotti’s second game in charge, through two goals from Dominic Calvert-Lewin and the Italian wants his side to impose their game.

“We have to be focused on the opposing team of course, because we have to try and find the weakness of the team,” he added.

“But we have to be focused on ourselves most of the time. We are trying to avoid the mistakes against Southampton.”

Pitch to Post Preview: Jamie Redknapp on Man Utd v Arsenal; plus Liverpool’s CB options, and will Everton bounce back?

Jamie Redknapp joins Peter Smith on this week’s show to look ahead to Sunday’s showdown between Man Utd and Arsenal and says there are more questions than answers at Old Trafford as Ole Gunnar Solskjaer prepares for his 100th game in charge.

Sky Sports News reporter Vinny O’Connor has the latest on Liverpool’s injury problems and discusses the young players who could cover at centre-back.