Everton’s performance at Southampton last weekend, where they feel to their first defeat of the season, contrasted with the club’s recent returns, which will concern Carlo Ancelotti. But the difference James Rodriguez has already made on Merseyside is reason to believe they’ll soon be back on track.

James has immediately become one of the Premier League’s most creative players in his short time at the club, playing a pivotal role in their rise to the top of the table.

Just one player has recorded more than his 17 chances created in six games this season – for context, no Everton player created more over their final 14 games of last season. 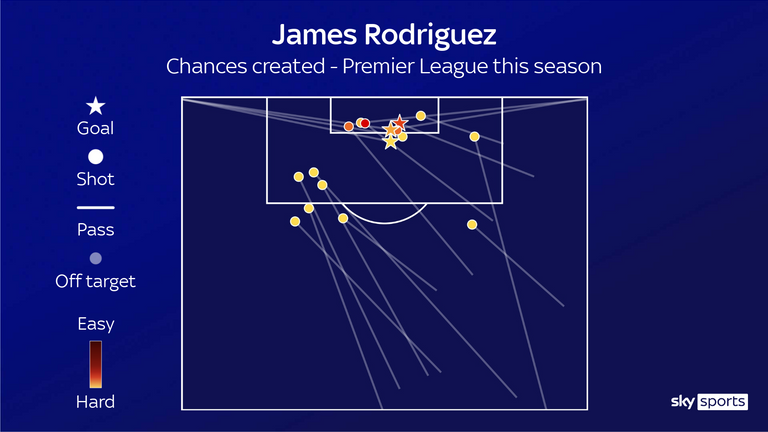 Everton have already scored 14 Premier League goals, of which James has been heavily involved in the vast majority. He has three himself, three assists, and also leads the Premier League with four secondary assists – the pass before the assist – making him involved in the final three actions to an impressive 10 of those 14 goals.

His three assists have all come from set-pieces but it would be a mistake to think this is the only area James is contributing.

Opta’s expected assists metric charts every single pass on a football field, calculating the likelihood it ends in an assist and, while James leads the way both overall and from set-pieces, from open play his passes still account for 6th-best in the Premier League.

“Measures the likelihood that a given pass will become a goal assist. It considers several factors including the type of pass, pass end-point and length of pass.” 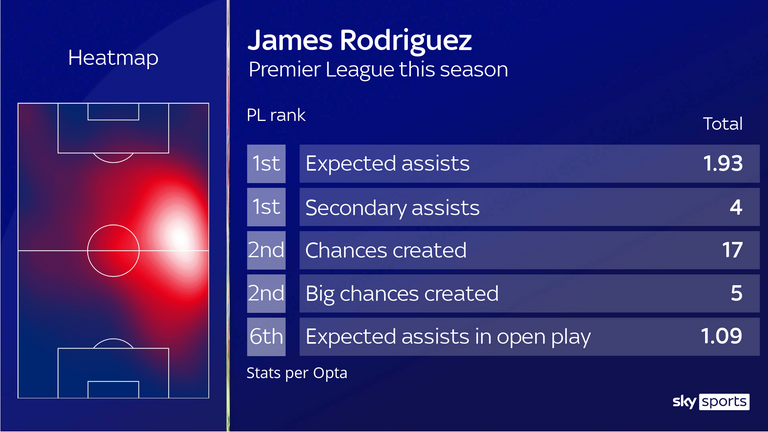 James’ creative value to Everton can then be accentuated further still through StatsBomb’s shot-creating actions metric.

“The two offensive actions directly leading to a shot, such as passes, dribbles and drawing fouls. Note: A single player can receive credit for multiple actions and the shot-taker can also receive credit.”

James is behind just Mohamed Salah and Kevin De Bruyne overall this season and is currently averaging 5.6 per 90 minutes, which is among the division’s leading ratios. The fact this is almost double the rate any other Everton player has recorded since the start of last season fully distinguishes his importance and highlights just how involved he is at key moments for his new side.

This drastic creative upgrade has unsurprisingly led to Everton posing a significantly augmented attack compared to recent seasons. While six games remain a small sample size, Ancelotti’s side are currently creating a higher amount of chances per game than in any previous season Opta have expected goals data for.

The fact Everton effectively upgraded their midfield playing behind James has also played a part in this, too. Allan has immediately supplied a stream of defensive actions in front of the back four, while Abdoulaye Doucoure is making contributions in both boxes. The impact of this pair, especially off the ball, has enabled James extra licence to make such a difference further forward.

The Colombia international was not as focal against Southampton as in previous Premier League outings so far which, as Ancelotti highlighted in the build-up, may have been down to fitness. Everton also had to contend with a suspended Richarlison, as they will this weekend at Newcastle, with Lucas Digne set to join him on the sidelines.

All this leaves James even more integral to his side’s immediate fortunes. Fully fit, the early signs suggest Everton’s new signing can provide a creative return not seen at Goodison Park for many seasons.

Ancelotti will be hoping for an immediate boost this Sunday, as Everton aim to get back to winning ways.

The Pitch: James to create 5+ chances for Everton v Newcastle

“I’m pitching faith in James Rodriguez. If he’s fit, I believe he will create a lot of chances for Everton in this game against Newcastle. I’m saying he creates five or more chances per Opta’s definition. Maybe even six!

“For context Kevin De Bruyne led the Premier League averaging 4.4 per 90 minutes. No other Premier League player averaged much more than three. Recording five or six is a big thing.

“Obviously there are plenty of occasions when a player will do that but no Everton player has recorded six chances or more in a game for over two years. So I think it would be quite a feat if he did.

“Given Newcastle’s stats, I feel this is a game – whether Everton are successful or not – they could have a lot of shots in and I believe James will be the architect behind that.”

Pitch to Post Preview: Jamie Redknapp on Man Utd v Arsenal; plus Liverpool’s CB options, and will Everton bounce back?

Jamie Redknapp joins Peter Smith on this week’s show to look ahead to Sunday’s showdown between Man Utd and Arsenal and says there are more questions than answers at Old Trafford as Ole Gunnar Solskjaer prepares for his 100th game in charge.

Sky Sports News reporter Vinny O’Connor has the latest on Liverpool’s injury problems and discusses the young players who could cover at centre-back.