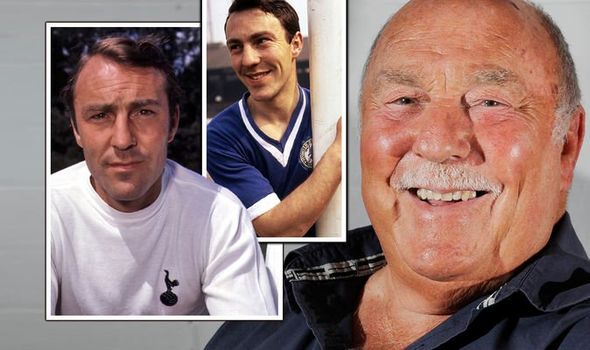 Former Tottenham and Chelsea striker Jimmy Greaves has died at the age of 81. Greaves was Spurs’ record goalscorer of all time, while he also managed 44 strikes for England. As well as Spurs and Chelsea he also featured for AC Milan and West Ham, and is widely regarded as one of the greatest players this country has ever produced.

Spurs released a statement on Sunday morning which read: “We are extremely saddened to learn of the passing of the great Jimmy Greaves, not just Tottenham Hotspur’s record goalscorer but the finest marksman this country has ever seen. Jimmy passed away at home in the early hours of this morning (Sunday 19 September), aged 81.

“Throughout his wonderful playing career, Jimmy’s strike rate was phenomenal. His Spurs return was 266 goals in 379 appearances between 1961 and 1970 – 220 goals in 321 league games, 32 goals in 36 FA Cup ties, five in just eight League Cup ties and nine in 14 European matches.

“The 37 league goals that he netted in the 1962/63 season remains to this day our record by any player in a single season.

“A member of England’s 1966 World Cup-winning squad, Jimmy also scored 44 goals in his 57 senior international appearances, with 42 of those caps – and 28 goals – won while a Spurs player.

“He was awarded an MBE in the Queen’s New Year Honours list at the end of 2020.

“We extend our sincere condolences to his wife Irene, their four children, 10 grandchildren and great grandchildren.”

Further tributes have been pouring in throughout the world of football following the announcement of the sad news.

Former Spurs player Micky Hazard wrote: “Today we lost our greatest Jimmy Greaves. Words cannot explain how I feel and my thoughts and prayers go out to his wonderful family. Heaven has gained our hero and what a Spurs team we have up there. Rest in piece my friend, Jimmy you are simply the greatest Spur ever COYS.”

Another Lilywhites legend in Graham Roberts said: “So sorry to hear the death of the greatest striker of all time in England and my friend @JimmyGreaves and sorry to his wonderful family and my good pal Danny. Very sad day for all and today let’s all show Jimmy our love from both clubs. Rip you great man.”

Ian Wright posted: “The first footballers name I ever heard from my teacher. “No Ian! Finish like Jimmy Greaves!” May he rest in peace.”

And West Ham’s official Twitter account added: “We are saddened to learn the news of the passing of Jimmy Greaves. The Club sends its deepest condolences to Jimmy’s family and friends.”

Two of Greaves’ former clubs in Spurs and Chelsea face each other this afternoon in what is sure to be a hugely poignant occasion.