‘When you have no ticket and want to watch a great game!’: Jose Mourinho makes light of his antics behind the dugout after Roma red card as he posts footage of himself climbing railings to belt out instructions

Jose Mourinho has made light of his sending off during Roma’s goalless stalemate with Napoli just days after their humiliating defeat by Bodo/Glimt in the Europa Conference League.

The Roma boss picked up two yellow cards in each half, with the second seeing him sent to the stands while getting a standing ovation from the home crowd.

In line with his usual antics, Mourinho gave the match official a sarcastic thumbs up as he took his marching orders. 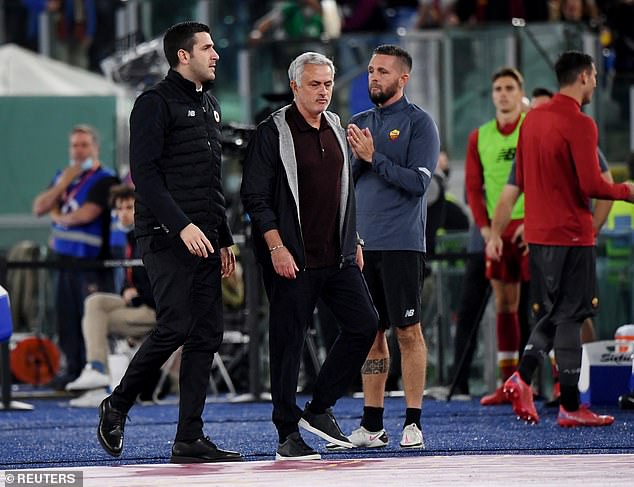 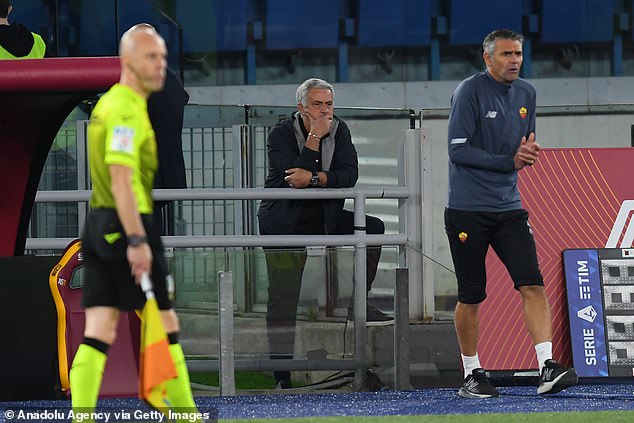 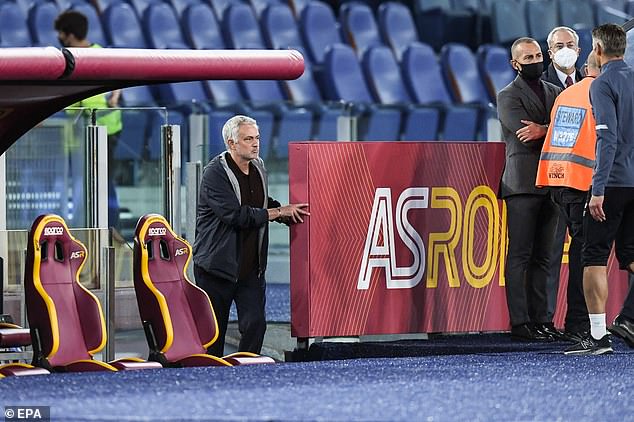 But the Portuguese manager didn’t appear too concerned with the sending off as he posted footage of him continuing to coach his side.

Mourinho could be seen climbing on to a ledge to see over the barriers behind the dugout at the Stadio Olimpico, gesturing wildly and shouting instructions over to the Roma players.

The former Manchester United manager posted the clip to his Instagram, joking he was ‘desperate to see a great football game’. 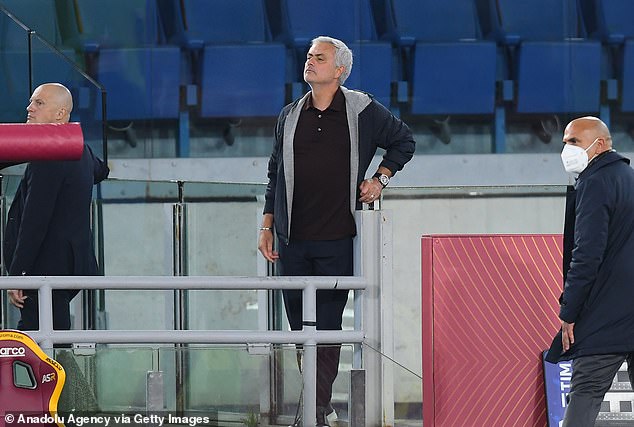 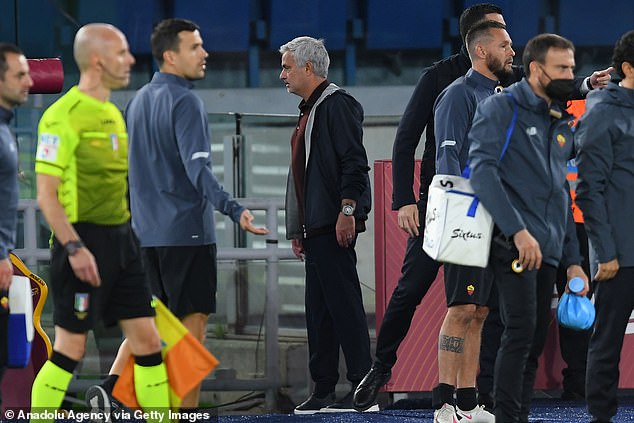 He left the pitch to a standing ovation from the home crowd, giving the official a thumbs up 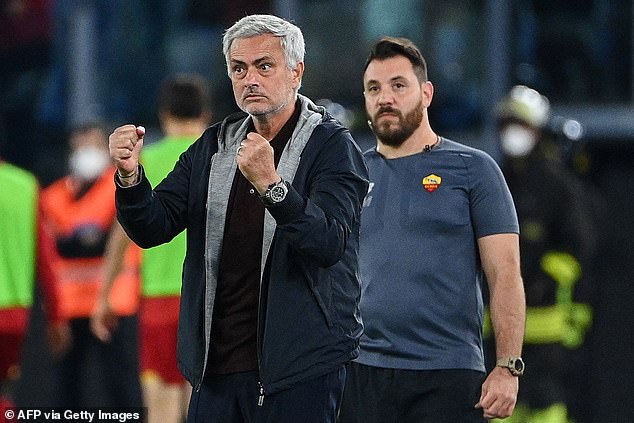 ‘When you have no ticket and you desperately want to watch a great football game,’ he captioned the post.

The former Chelsea tactician will serve a one match ban when Roma travel to Cagliari on Wednesday.

The capital club managed to scrape a point from the crunch game, halting league leaders Napoli’s perfect start to the season.

The Serie A clash was a tightly contested affair full of incident but Roma created little chances.

Tammy Abraham had the best of their chances, slotting wide from a good position in the first half. 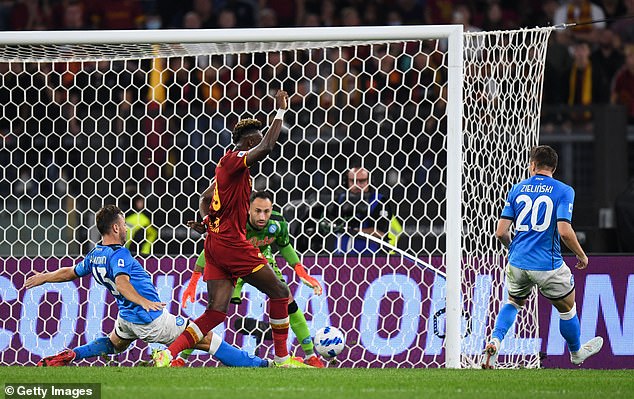 And as his side continued to struggle in the second half, Mourinho’s frustration boiled over earning him his second yellow card for arguing with the referee just eight minutes before full time.

Mourinho had earned his first yellow card in the 19th minute for the same offence.

Luciano Spalletti suffered a similar fate to his Roma counterpart – albeit after the full time whistle – as he was handed the same sentence for entering the pitch and applauding the referee, instantly being shown a red card of his own.

The pair were just two of four Serie A managers to see red at the weekend. Simone Inzaghi and Gian Piero Gasperini were also given touchline bans for dissent.

Inzaghi was dismissed during his team’s 1-1 draw at home to Juventus, following his reaction to the visitors being awarded the late penalty from which Paulo Dybala equalised.

While, Atalanta manager Gasperini was also shown his marching orders late on, with his side conceding at the death to draw at home to Udinese. 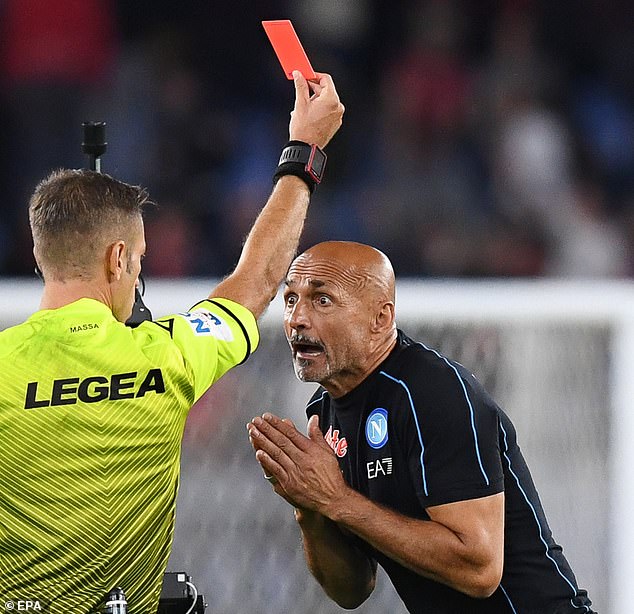 In typical Mourinho fashion, he was less than impressed with his sending off but took some satisfaction in his opponent receiving the same treatment.

‘It was an intense game, I saw tired players, we had our chances, it was a unique game also for the two red cards shown to the coaches,’ he said.

‘I wasn’t happy about the referee’s decision, but I didn’t say a word. Nobody is going home happy, both coaches were sent off, but I think the referee was balanced.’

After making an impressive start to the season themselves, Roma have now won just two of their last six league games to sit fourth.