ALVISE CAGNAZZO: Stubborn Jose Mourinho MUST adapt as a coach or his Roma empire will quickly come crashing down following an embarrassing defeat by minnows Ludogorets in the Europa League

Rome is a city which does not forgive mistakes.

There is heaven and hell, day and night, sun and moon. The swing of emotions is an historical feature of a city that has known the poetry of many writers and the flames of emperor Nero.

Jose Mourinho has many flaws. He can be arrogant, presumptuous and has a nasty streak engraved in the cells of his DNA, but he also has the gift of being a great character and communicator.

His charm is a magnet for players who dream of being coached at least once in their career by someone like him, Jurgen Klopp or Pep Guardiola. 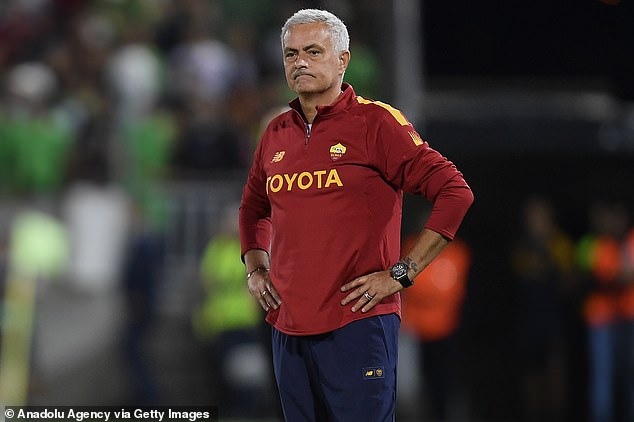 Mourinho’s career was at a crossroads after leaving Tottenham, but he had an impressive start to life at Roma and won the UEFA Conference League last season.

Yet he risks going from hero to zero after a horror week for the club. Following a 4-0 defeat to Udinese in Serie A last weekend, Roma began their Europa League campaign with a 2-1 loss to Ludogorets in Bulgaria on Thursday.

The team have shown the same problems that the Portuguese coach inherited from his predecessor Paulo Fonseca.

Mourinho is well aware of the fickleness of Italian football fans and in particular of Roma fans. He knows perfectly well that they could bring down his empire.

Mourinho murals in the popular neighbourhoods of the city – that depict him riding a Vespa or in iconic poses – can be quickly painted over if he continues to get negative results like last week. 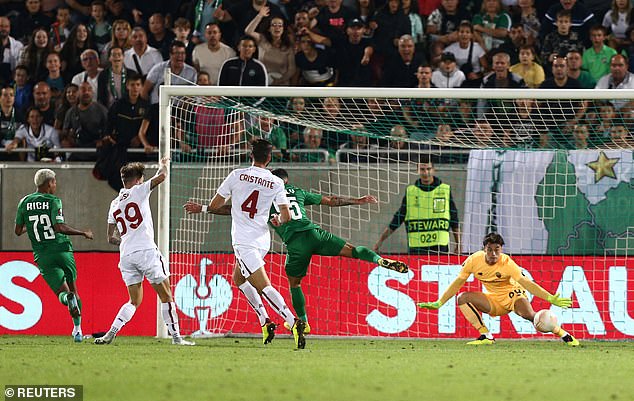 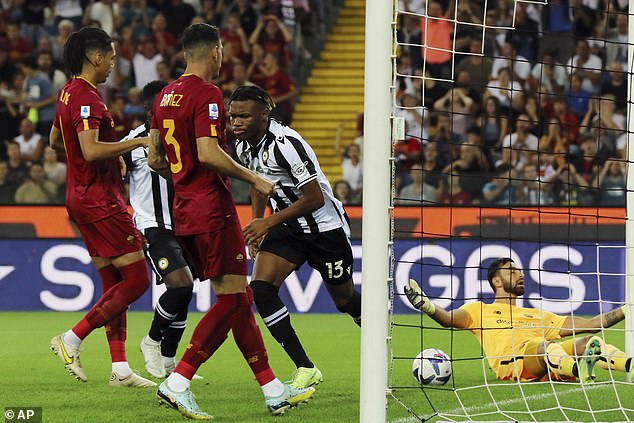 Ludogorets would struggle to survive relegation in Serie A, so the thought that Roma lost against them raises big questions about where the Italian side go from here.

‘I’m not saying we played well because it’s not true, but it was a performance sufficient to win or at least not to lose,’ he said. ‘In these last two games, everything has gone against us’.

Perhaps Roma’s main problem is precisely that. The denial of any bad performance so as not to impact team morale. But this was a second defeat in four days and called in to question Mourinho’s ability to motivate his players. 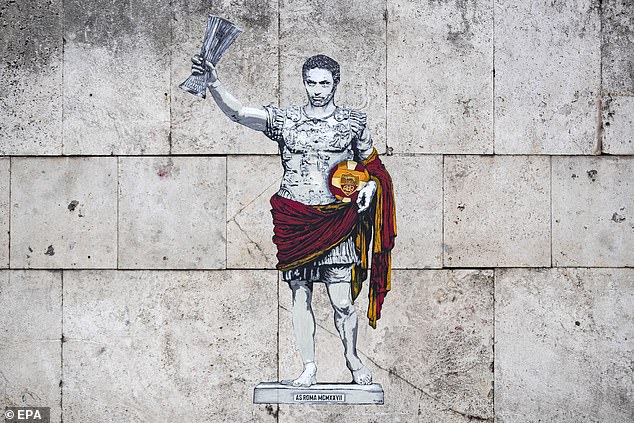 There are Mourinho murals in the popular neighbourhoods of Rome, showing his popularity

It is difficult to imagine a coach so experienced who cannot understand the reasons for two poor results and now the fans are asking Mourinho to find a solution to avoid yet another disappointing season. His choices are always strategic but they are struggling to have an impact at the moment.

Mourinho does not tinker with his side much, making mostly the same tweaks since the beginning of the season. On Thursday he selected goalkeeper Mile Svilar for his debut and central striker Andrea Belotti, but both underwhelmed.

Mourinho is a puppeteer who personally chooses players to sign – even if they do not always work out, as has happened several times in his career.

He is a demanding coach, demonstrated by how he put an end to Jordan Veretout’s time at the club after the Frenchman violated club rules by partying with his Covid-positive wife. 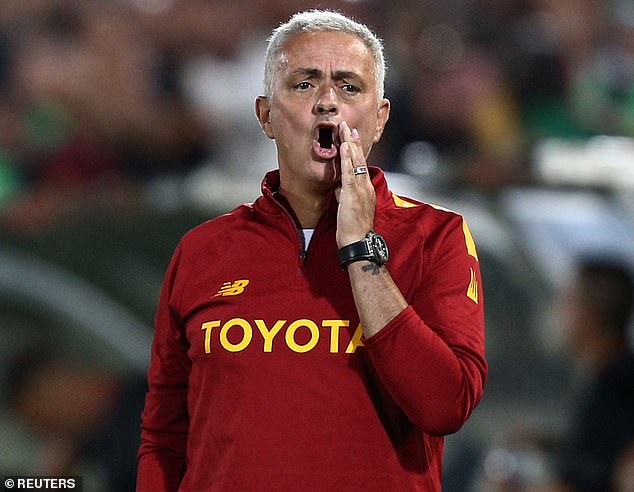 Strong without ever losing his charm, Mourinho is a modern coach who has a history of getting the best out of teams and leading them to victory.

The most charismatic coach on the planet has personally chosen and convinced many players to play in Rome even without the lure of Champions League football. But now he needs to do more after two unacceptable defeats. He looks like a Hollywood actor at the end of his career who is merely enjoying life rather than getting better.

Mourinho has always been a good man-manager and not so good at improving individual players, but he must start to do this. The whole Roma team are still very much on his side and no one dares question him, but much more is needed to achieve better results domestically and in Europe.

Defence is the team’s weak point and Mourinho should focus on this problem rather than attacking refereeing decisions or trying to deflect criticism away from the team. 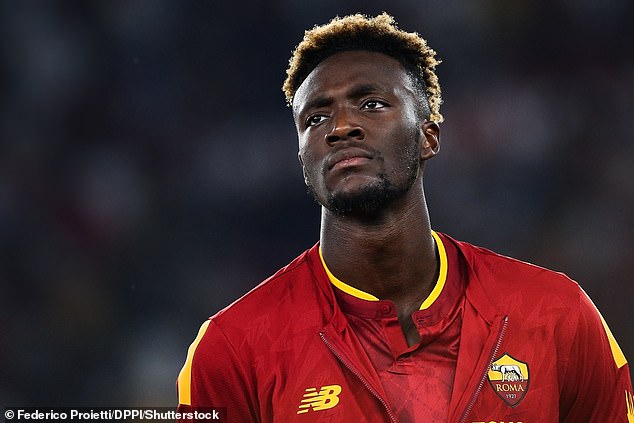 Six goals conceded in two games is too many even for a team just promoted to Serie A and Roma continue to struggle with finding the right balance that Mourinho has been unable to solve with the signing of Nemanja Matic.

There is plenty of promise in this team, but in reality they are often let down by cracks in the defence and an attack lacking potency. Paulo Dybala is a hugely talented player but he needs to step up to become a great Roma player.

Following the 4-0 defeat to Udinese, Mourinho quoted legendary Serbian manager and former Roma boss Vujadin Boskov: ‘It is better to lose a game 4-0 than four games 1-0’. It is a phrase that almost becomes laughable after another terrible defeat in Bulgaria.

Attacking pair Belotti and Dybala are both 28 years old but already they appear shadows of their former selves. Is the Argentine a top player anymore? Mourinho, for one, is starting to lose faith in him. 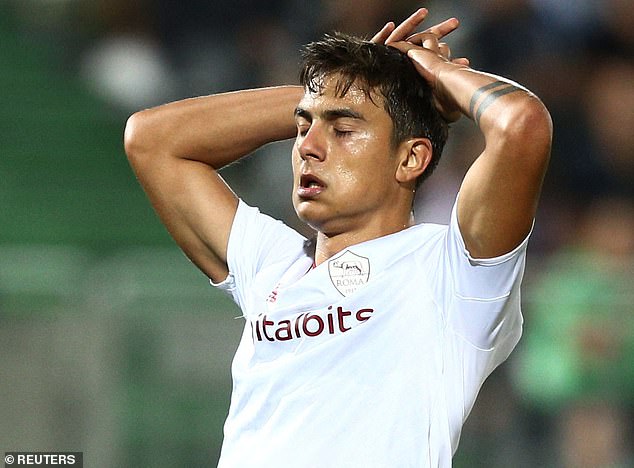 In Bulgaria, Roma lost their clinical edge in front of goal and missed many chances to take the lead. Without the injured Abraham, the team look lost in attack.

Inter Milan tried to sign Dybala from Juventus in the summer, but Mourinho always had hope of bringing the scarred Argentine gladiator to the city of the Colosseum.

But Dybala is no longer the player who scored two extraordinary goals against Barcelona in a Champions League quarter-final five years ago.

His transfer to Roma was perhaps the most interesting in Serie A this summer as he downgraded from a team in the Champions League to a side in the Europa League. Now Roma understand why Juventus let him leave so easily.