In front of a masked, socially distanced crowd, Benjamin Pavard scored the only goal in the 59th minute in a comfortable game for the Champions League winner against Mexico’s Tigres, the first team from North and Central America to reach the world final. 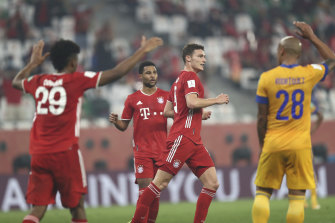 Benjamin Pavard (centre) celebrates what proved the decisive goal for Bayern Munich against Mexican side Tigres in the Club World Cup final.Credit:AP

Pavard scored in the 59th minute following a VAR review and in front of around 12,000 spectators allowed into Education City Stadium, after Tigres keeper Nahuel Guzman had stopped a Robert Lewandowski header.

The Germans, who also twice hit the woodwork, won all domestic and European titles they competed for in 2020 and are the first team to match Barcelona’s sextuple from 2009.

Mueller wasn’t there to celebrate with the team, though. Bayern and FIFA said he was moved into isolation after his positive test was revealed. Their statements didn’t address how Mueller might have been infected or whether any other players had close contact with him.

Bayern added the title to their haul of the German league and cup, the Champions League and the European and German Super Cups under Flick. 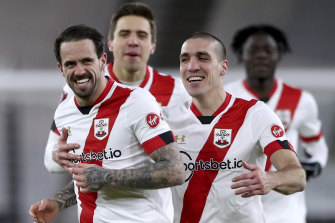 Danny Ings broke the deadlock for Southampton in the 49th minute before Stuart Armstrong added a second at the end of regulation time.Credit:PA

Meanwhile, second-half goals from Danny Ings and Stuart Armstrong earned Southampton a 2-0 win at Wolverhampton Wanderers and a place in the FA Cup quarter-finals.

The victory lifted Southampton after four successive Premier League defeats, Ings firing them ahead in the 50th minute with a freakish goal as goalkeeper John Ruddy saved the striker’s close-range shot from a tight angle but the ball ricocheted off Ings and trickled over the line.

The goal was initially ruled out for offside but awarded after a VAR check.

Armstrong sealed Southampton’s win in the 90th minute with a clinical finish in off the post as he took advantage of a catalogue of errors and side-footed the ball past three defenders and the stranded Ruddy.

The Saints will face Bournemouth in a south coast derby in the final eight, while Manchester City meet Everton, Leicester host Manchester United and the winner of Thursday’s match between Barnsley and Chelsea host Premier League cellar-dwellers Sheffield United.