As the rain pelted down, splashing against the floor-to-ceiling glass windows at the expansive Red Bull Academy, Julian Nagelsmann paused briefly to soak in everything that has happened since he wanted nothing to do with football after suffering cruciate ligament damage aged 20.

Football is not an industry kind with time for reflection, especially not if you’re a young manager progressing through the game at such a rapid rate that you rebuff an approach from Real Madrid before turning 31.

In February, though, as RB Leipzig were readying to line up against Tottenham in the Champions League last 16 – an encounter that pitted Nagelsmann against Jose Mourinho, the man he used to be compared to when he worked in the shadows at Hoffenheim – there was a chance for him to take stock.

Preparing for a big professional challenge has a way of prompting a rewind and the former Augsburg II defender recalled how having to prematurely end his playing career forced him to shun the sport for over a month.

Nagelsmann was so distraught at the early death of his dream that he threw himself into business science instead – something he felt was so far removed from kicking a ball around. A job in sales at BMW was arranged after he passed his mid-term exams, but he needed to pay for his course and so returned to what he knew. As he was still under contract at Augsburg, Nagelsmann did opposition scouting analysis for Thomas Tuchel, 14 years his senior. 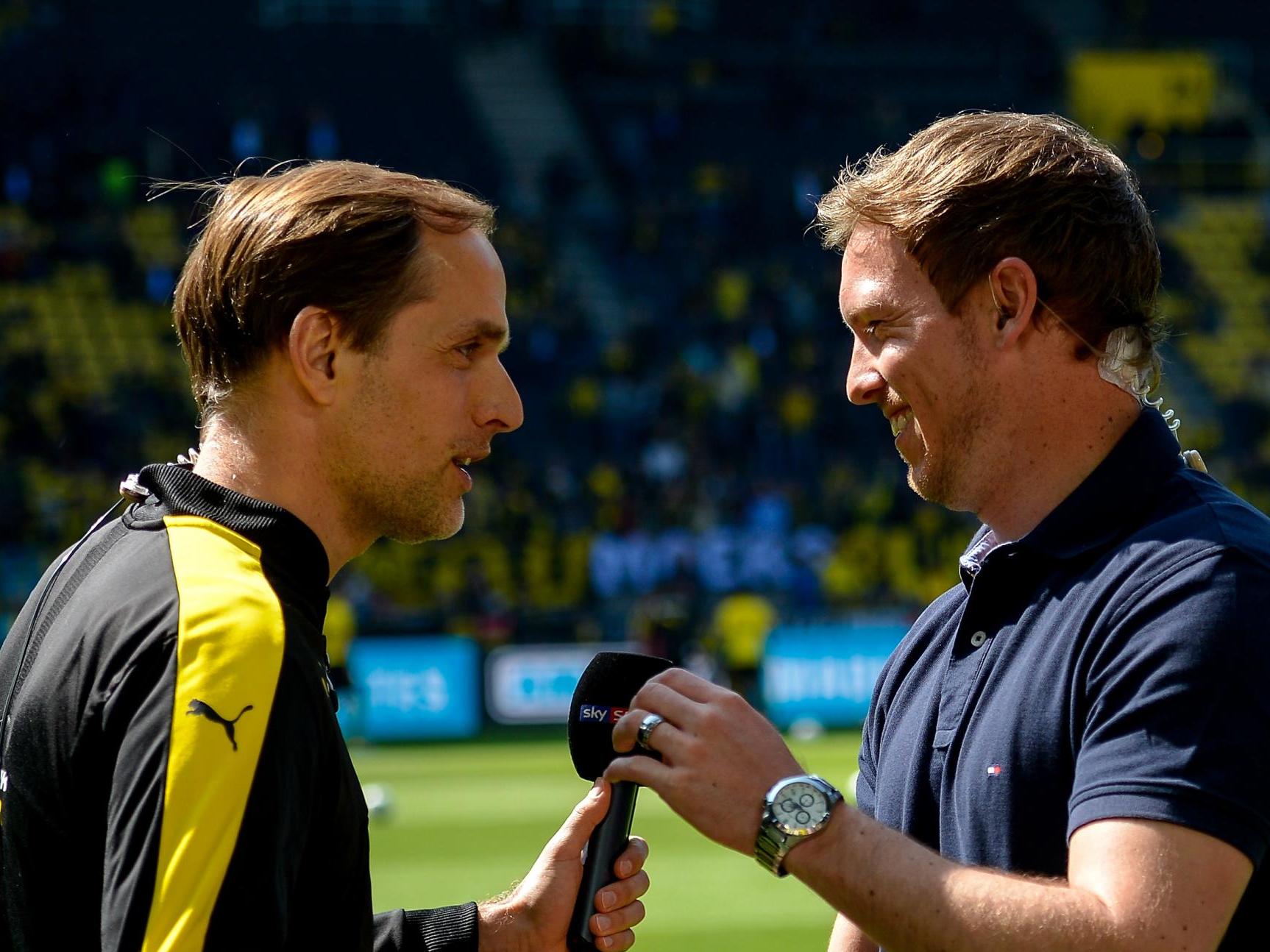 The tactician also endured a serious knee injury that curtailed his days as a footballer, and while the pair shared much in common, a love of coaching was not included.

It was a natural process for Tuchel, who had always been enthused by working in the technical area. It was a practical decision for Nagelsmann: a way to make money and to give football one last shot. He would never have thought about a career in the dugout if it wasn’t for Tuchel’s prompting, which led to an offer from 1860 Munich to work as their Under-17 assistant coach alongside Alexander Schmidt in 2008.

While Nagelsmann sat there, speeding through his journey – how that job refuelled his love and passion for the game, studying sports science to sharpen his off-pitch understanding, becoming the assistant coach of Hoffenheim’s U17s before taking full charge of the team, being promoted to the club’s backroom staff under Frank Kramer in 2012-13, leading their U19s to the Bundesliga championship the season after, being catapulted into Hoffenheim’s hotseat at 28 and transforming them from relegation strugglers to European candidates.

Now he was at Leipzig, waiting to pit his wits against a manager with 25 trophies to his name on the grandest stage. The nickname “Mini Mourinho” was spun off six years ago by the goalkeeper Tim Wiese. Nagelsmann leaned back in his chair and laughed about how good football had been to him after such a cruel twist, how this fate was no fairytale but a product of graft, of education, of tirelessly refining his craft. 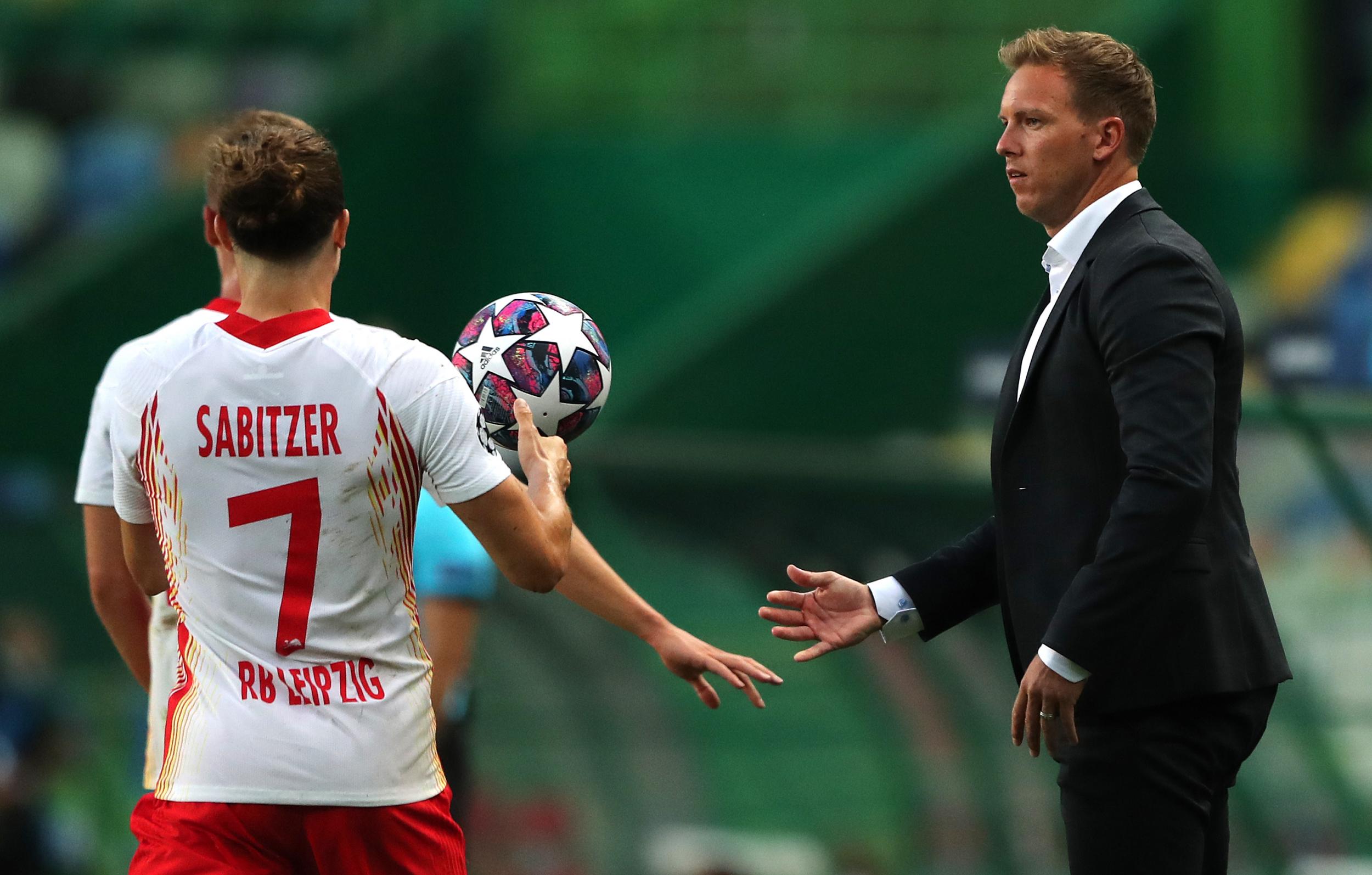 During an in-depth interview with The Independent, as he spoke about the Champions League knockout rounds being alien to him while they were second nature to Mourinho, Nagelsmann could not have imagined being primed to face Thomas Tuchel’s Paris Saint-Germain in the semi-finals of the tournament.

He had quite comfortably outsmarted Mourinho, the man he was compared to (on account of his appetite to learn rather than similar approaches or personality) with Leipzig recording a 4-1 aggregate against Tottenham.

He then flummoxed Diego Simeone’s defensive Atletico Madrid, instructing his charges to afford them possession before flooring them with a late goal.

And on Tuesday, he will oppose the man who persuaded him to get into coaching. The spark for his pause, his reflection, his path. There will be no sentiment, though. Not so close to ultimate club glory and not when this seemed far-fetched a few months ago.

In February, Nagelsmann was cooling talk of Leipzig winning the Bundesliga. “It’s normal to think about being German champions,” he told The Independent. “But if you’ve got a serious understanding, you know that the performance of a young team never goes in a straight line. There are ups and downs as they develop. They are not perfect in each game. Our process is important, not just the result.” 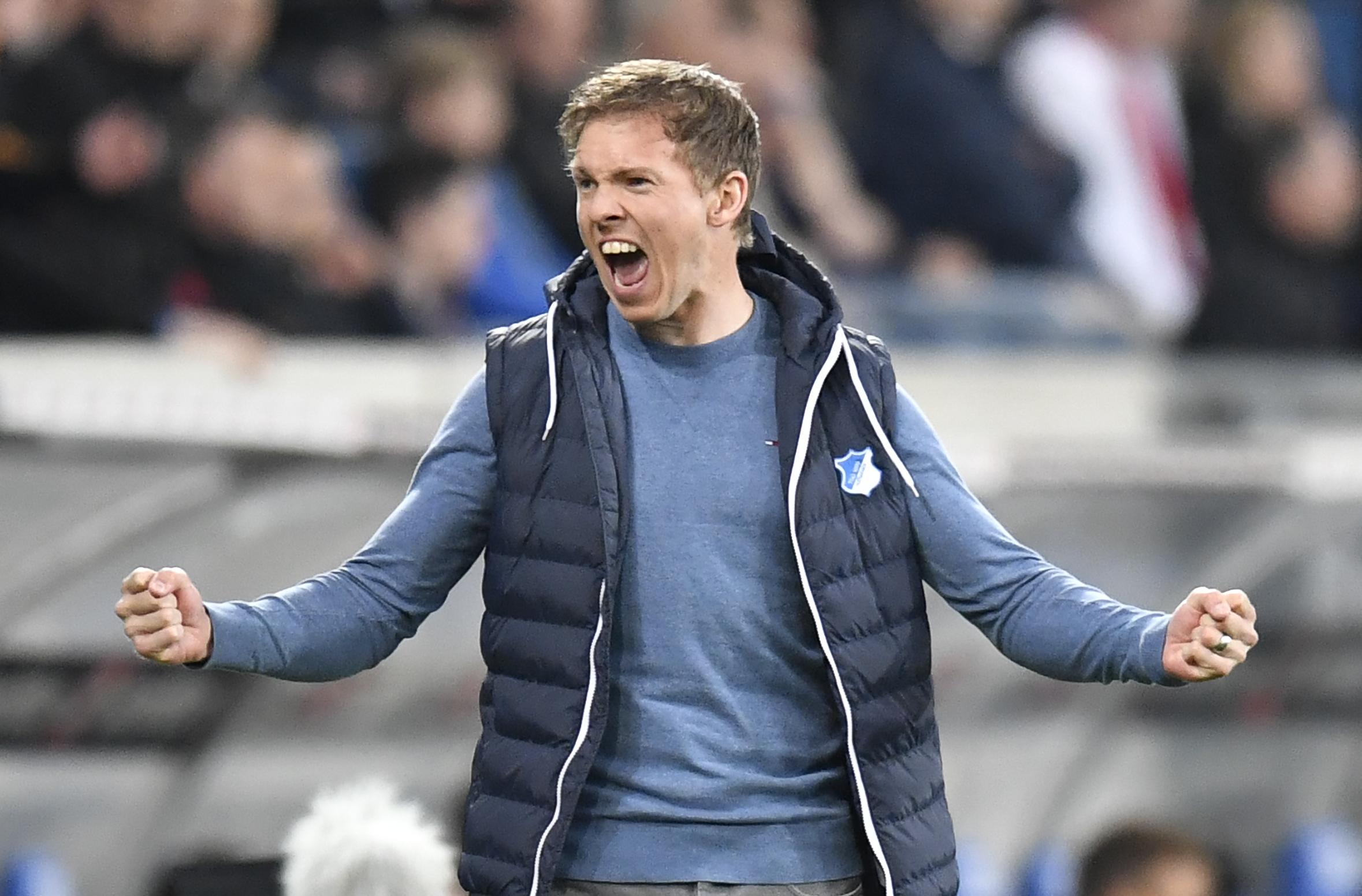 Now, despite ceding top scorer Timo Werner to Chelsea, he has to calm conversations about them becoming champions of Europe, while plotting how he can maximise the opportunity to make them so.

Nagelsmann is a supremely quick learner and Leipzig have benefited from his tweaks on the continent, which have centred around stability and offensive protection. “During the first season of European football at Hoffenheim after we lost the Champions League qualifier to Liverpool, I changed a lot of players between Bundesliga matches and the Europa League for fresh legs,” he explained.

“I learnt that we needed more stability. You need to keep five or six of the same places to give you structure, to be your spine. This is very important.

“The other difference is the mental and tactical change between the two competitions. We had too many offensive-thinking players for European games and opponents punished a lack of protection. In the Bundesliga, you can have maybe six or seven guys who lean more towards the offensive phases in a game, but never in Europe.”

Tuchel, above everyone, will know that Nagelsmann’s tactical planning for the showdown will be exemplary. Having been privy to his opposition scouting reports and observing his wide lens for reading the game, the 46-year-old believed the raw kid could turn into a German coaching gem and vouched for him early on.

He was not wrong. Whether Nagelsmann’s powers of harnessing collective might through a clear football identity can undo PSG’s supreme individuals remains to be seen, but regardless of what happens in the game, the mentee is ultimately primed to supersede the master.

He has already declined interest from Real, is greatly admired by Manchester United’s Ed Woodward, has been monitored by both Tottenham and Arsenal for a while and is seen as someone who could definitely succeed Jurgen Klopp at Liverpool when he departs the club. 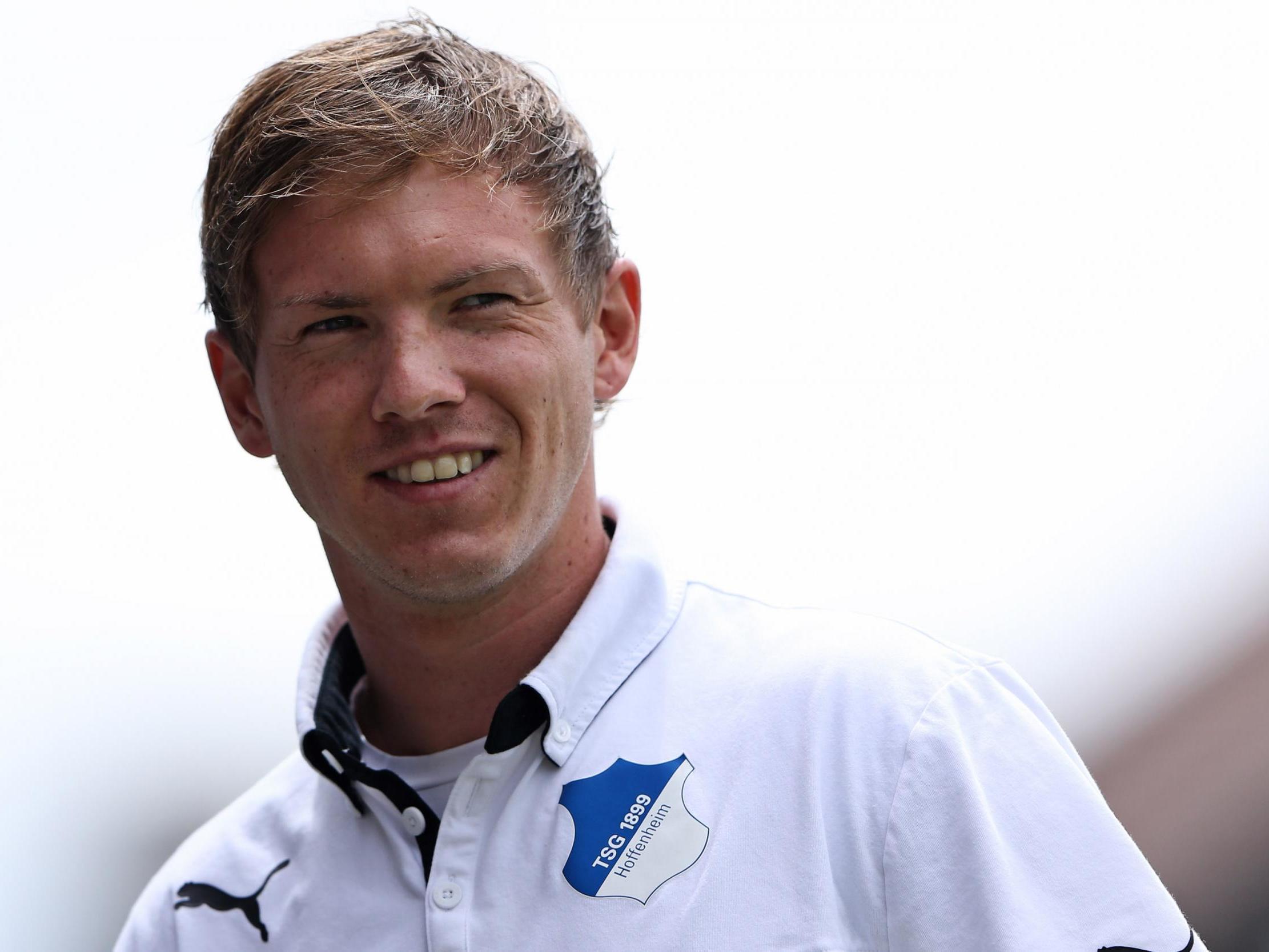 While the Champions League semi-finals are tagged must-win for Tuchel as domestic success is an assumption for PSG and it presents the chance for him to show he can be a great manager, not just a good one, there is no such hang-ups for his counterpart.

Tuchel has always been viewed an excellent on the training pitches and tactically, but there have been lingering question marks around his man management and relationships with staff. At both Mainz and Borussia Dortmund, he was respected but not liked and there was always the feeling he didn’t maximise the tools at his disposal at Signal Iduna Park.

He has the greater resources and also the greater burden to prove his name belongs amongst the very elite in the game. On the other hand, there is no manager as coveted as Nagelsmann at the moment, nor one with a higher ceiling.

Tuchel may have guided him and may get the better of him tonight, but that is temporary. Nagelsmann has all the hallmarks to become a permanent fixture in the decisive phase of the Champions League.

That’s not bad for someone who had to be cajoled into coaching, whose appointment at Hoffenheim was filed as a “PR stunt” by Rhein-Neckar-Zeitung, while Frankfurter Rundschau went with ‘Schnapsidee’ – a “crackpot idea” that could only have come under the influence of alcohol.