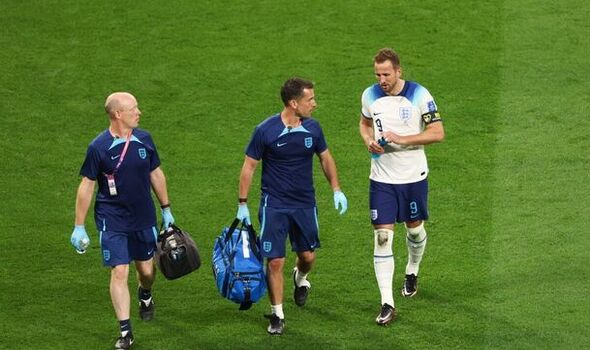 Harry Maguire and Harry Kane were reported to be fit and well despite being absent from England’s open training session on Tuesday. Only the late substitutes and unused players from the 6-2 win were involved in the session as the bulk of the first team worked indoors – including Maguire and Kane.

Callum Wilson was the main exception to the rule, undergoing what was described as “off-feet conditioning work” as a precaution after picking up a niggle during his 14 minutes of action.

Sadly, James Maddison remained the only player ruled completely out of any of the sessions as he continues to nurse back to full health the injury he picked up on the final weekend of the Premier League campaign.

Ahead of the latest injury update, Maguire had caused the greatest concern, collapsing to the floor in the 67th minute and holding his head. England medics checked him over, shining a torch in his eye, and the immediate outside view was that he might have suffered some sort of concussion.

However, it emerged afterwards he was suffering instead from some sort of illness that was causing him blurred vision and he was replaced by Eric Dier.

Kane had earlier been forced to the touchline for treatment after the top of his foot appeared to be caught in a challenge just outside the Iran area. He was able to return before play had even resumed, and was not among the first raft of players substitutes on 70 minutes – waiting another five instead before finally making way for Callum Wilson.

England’s second match against the USA at the Al Bayt Stadium is on Friday with a kick-off set for the lower 10pm temperatures. As a result, the post-match warm-down session at the Al Wakrah Sports Complex was also delayed by an hour from usual until 3pm with the shadows already lengthening and a cooling sea breeze.

Kyle Walker was again involved in the main session and is thought to be in contention for the USA match. Despite declaring the Iran match as too soon for him to recover from his groin operation, he was still able to take a place on the bench in the Khalifa International stadium.

Meanwhile, Kane responded after England decided not to wear the One Love rainbow armband they had planned to following threats of bookings or even suspensions for players who got involved.

Speaking about the situation, Kane said: “We’re disappointed. We wanted to wear it, that decision was taken out of my hands. I turned up to the stadium with the armband that I wore and I was told I had to wear that.

“Look, it’s out of our control as players. I’m sure the FA and FIFA will continue those discussions but most importantly today we focused on the game and got a great result.

“You’ve seen over the last five years we’ve made a stand as a squad and we’ll continue to do that as much as we can. We took a knee today as well but sometimes these decisions aren’t up to us and that’s the bottom line.”