Karim Benzema’s fine run of form continued with a double as Real Madrid won 3-1 at Celta Vigo to move up to second place in La Liga.

Zinedine Zidane’s side needed to take advantage of playing a day before neighbours Atletico and rivals Barcelona.

They did just that with a victory at Abanca-Balaidos as Benzema struck twice, Santi Mina halving the arrears before Marco Asensio wrapped up the points late on.

Benzema made it eight goals in his last six games and opened the scoring with a well-taken finish on the 20-minute mark.

The France forward collected a pass from Toni Kroos and finished coolly from 12 yards to put the visitors in front.

The same duo would combine to double Real’s lead as Celta were caught trying to play out from the back and Kroos nipped the ball off Renato Tapia before once again picking out Benzema, who made no mistake.

Madrid were well on top but would not have it all their own way as the home side pulled one back before the break.

Mina timed his run perfectly to break the visitors’ high defensive line and head in a Denis Suarez free-kick.

After the interval, Celta enjoyed more of the ball and Iago Aspas saw a shot well saved by Thibaut Courtois just after the hour.

Aspas would go even closer, hitting the post with just eight minutes left, only for Real to make sure of the points in stoppage time – Benzema this time turning provider, crossing in for Asensio to head in from close range. Goalkeeper Bono was Sevilla’s unlikely hero as they snatched a 1-1 draw at struggling Real Valladolid thanks to his strike deep in stoppage time.

Chilean midfielder Fabian Orellana put the hosts in charge with a 44th-minute penalty after forward Shon Weissman had been barged over by Sevilla defenders Diego Carlos and Karim Rekik.

Sevilla striker Luuk de Jong missed two chances to level in the second half, heading against the woodwork from point-blank range and then glancing a Suso cross wide of the far post.

Instead it fell to Bono to get Julen Lopetegui’s side out of jail, the ‘keeper showing composure to side-foot home a low cross from Jules Kounde after a goalmouth scramble following a corner, becoming the first ‘keeper to score in open play in La Liga in more than a decade.

In the day’s other games, mid-table Athletic Bilbao drew 1-1 at home to struggling Eibar, and Huesca drew 0-0 with Osasuna.

Record-chasing Robert Lewandowski scored a first-half hat-trick on Saturday as 10-man Bayern Munich kept their four-point lead at the top of the Bundesliga with a 4-0 win over Stuttgart. 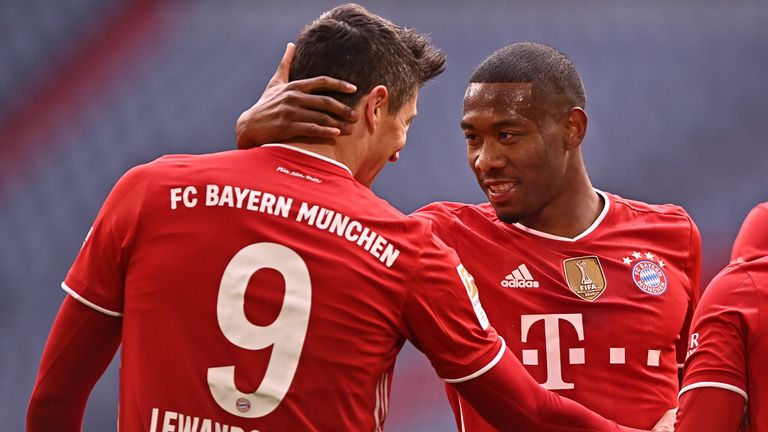 Bayern only started playing well after Canadian youngster Alphonso Davies was sent off for a bad tackle on Stuttgart’s Wataru Endo in the 12th minute. The defending champions’ response kept second-place Leipzig at bay before the teams meet on April 4.

“I’m thinking from game to game, and not of how many goals I must score to break this record,” said Lewandowski, who eclipsed Klaus Fischers’s haul from between 1968-88 to move second in the all-time top Bundesliga scorers list.

“I’m happy with how the team played in the first half. The red card woke us up”, Lewandowski said.

Davies was initially shown a yellow card for landing with his studs on Endos’ ankle, but a VAR check upgraded it to a red.

The sending-off only seemed to rouse his team-mates. Serge Gnabry crossed for Lewandowski to open his account in the 18th minute, four minutes before Thomas Muller and Leroy Sane played their way through the Stuttgart defence for Gnabry to get Bayern’s second goal.

Muller set up Lewandowski’s second a minute later and the Poland star completed his hat-trick in the 39th minute after being set up by Sane.

Stuttgart’s Sasa Kalajdzic, who had scored in each of his last seven appearances, missed some good chances in the second half for the visitors.

Meanwhile, Erling Haaland scored his second goal late on to salvage a 2-2 draw for Borussia Dortmund at Cologne, but the visitors dropped four points behind fourth-place Eintracht Frankfurt, who emerged from a bruising game with a 5-2 win over Union Berlin.

Not a great result. We will use this as motivation to be back stronger! Thanks to all the @BVB fans for your continued support. We’ll be back soon! 💪🏻 pic.twitter.com/9yFdBHVnIO

Both Haaland and Frankfurt forward Andr Silva took their Bundesliga goal tallies this season to 21.

Silva got Frankfurt off to a great start in the second minute, but Max Kruse equalised five minutes later and Union went on to create a host of chances.

Frankfurt midfielder Djibril Sow cleared off the line three times, before Union’s Robert Andrich kicked the ball into his own net in the 35th minute. Goalkeeper Andreas Luthe slipped as he tried to reach the back pass, but Andrich had likely struck it too hard anyway.

Silva set up Filip Kostic four minutes later, shortly before the Portugal striker grabbed his second of the game. Kruse scored his second in first-half injury-time to give the visitors some hope, but American defender Timothy Chandler removed any doubt for Frankfurt in injury-time. It was Chandler’s first goal of the season and his 13th in 222 Bundesliga games.

Jude Bellingham revealed after Dortmund’s game that he received racist abuse on Instagram. Bellingham shared a screen grab of racist emojis that were sent to him, which he captioned: “Just another day on social media…”

England showed their support for Bellingham with a tweet that said: “We continue to be disgusted by the discriminatory abuse our players – and others across the game – are being subjected to online. Something needs to change. We stand with you, @BellinghamJude.”

Union had 25 efforts at goal, compared to the home side’s nine. American forward Josh Sargent scored an own goal in Werder Bremen’s 2-1 loss at home to third-place Wolfsburg. Borussia Monchengladbach ended their eight-game losing streak with a 3-0 win at rock bottom Schalke. Jorge Sampaoli experienced his first defeat as Marseille coach as his side lost 3-0 at Nice on Saturday.

The hosts doubled their lead with around 20 minutes left when Amine Gouiri slotted through goalkeeper Steve Mandanda’s legs. Midfielder Alexis Claude-Maurice wrapped up the win in the final minute.

Marseille dropped behind Lens to sixth place while Nice climbed up to 10th.

Rennes leapfrog Metz into seventh place, one point behind Marseille to boost their chances of clinching fifth and a Europa League spot next season

Spezia secured a huge win for their Serie A survival hopes by beating relegation rivals Cagliari 2-1 on Saturday, but the visitors were left devastated when a last-minute equaliser was ruled out by VAR.

Vincenzo Italiano’s side were widely tipped to go straight back down to Serie B after being promoted to the Italian top flight for the first time last season.

However, their victory over Cagliari leaves them in 15th place on 29 points with 10 games remaining, seven clear of the Sardinian side in 18th.

Roberto Piccoli guided in a header early in the second half to open the scoring before Giulio Maggiores’ volley bounced off the turf and looped over goalkeeper Alessio Cragno in the 80th minute to double their advantage in unorthodox fashion.

Cagliari responded quickly when Gaston Pereira fired in from close range, and Joao Pedro thought he had snatched a point at the death when he bundled in a finish, only for the goal to be ruled out by VAR for offside.

Earlier, bottom-side Crotone squandered a golden chance to move closer to safety when they threw away a 2-0 half-time lead to lose 3-2 at home to Bologna.

A Junior Messias free-kick and Simy penalty gave the hosts a comfortable lead, but visiting coach Sinisa Mihajlovic’s changes at the break paid off as Adama Soumaoro pulled one back before substitutes Jerdy Schouten and Andreas Skov Olsen scored to complete a remarkable turnaround.

Crotone remain 20th with 15 points, eight adrift of the safety zone, while Bologna rose into the top half of the table and sit 10th with 34 points.