While the sheriff searches for a few answers, the deputy is starting to find himself.

It remains to be seen whether Leicester can satisfy their grander ambitions if Jamie Vardy’s scoring difficulties are prolonged, but for now Kelechi Iheanacho is carrying the burden well.

It is an unusual situation, for sure. Primarily for the fact that a striker as marvelously deadly as Vardy has hit such a sticky patch, but also because Iheanacho’s impact across the past four seasons has not always been so pronounced. 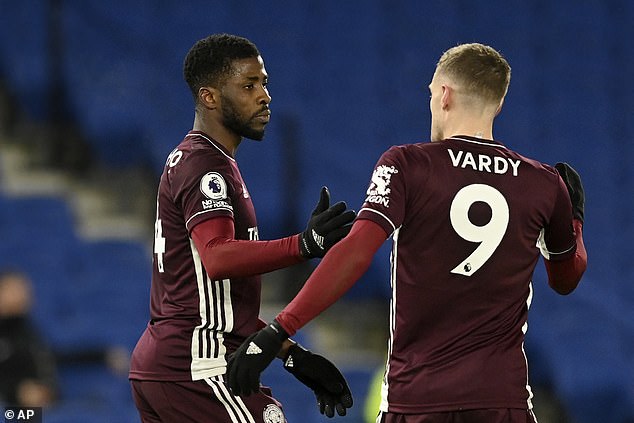 That one should go on a run of four goals in seven while his partner endures his driest spell in five years is exceptionally convenient. It was in 2016, during Leicester’s hangover season, that Vardy last produced numbers like these, with only one goal scored in his 14 games since Christmas.

It is no coincidence that Leicester’s results have suffered. Before Saturday’s awkward 2-1 win over Brighton, it was starting to look ominous.

While a return of 12 points from six games was hardly a crisis, it was unlikely to broaden out to Champions League football, particularly when the same period saw Leicester exit the Europa League.

The relief for Brendan Rodgers is that it would have resembled last season’s implosion if not for Iheanacho’s goals.

All of those four goals have been result-changers — he has been directly worth five points and a place in the FA Cup quarter-final. 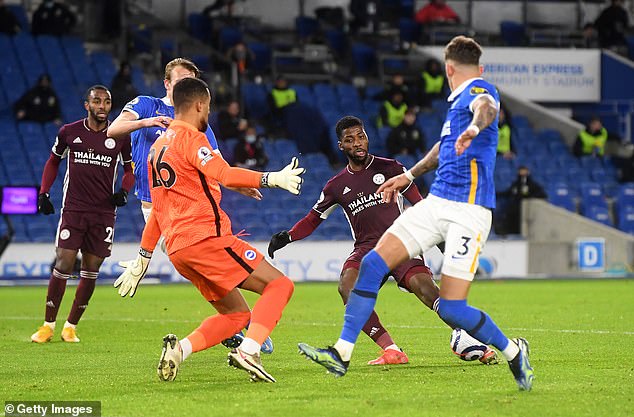 ‘He has come up trumps for us a few times,’ said Rodgers, whose side trailed to Adam Lallana’s strike and almost went 2-0 behind when the same player hit the post.

Even after Iheanacho’s well-taken equaliser, Lallana had another chance to seal it, before an error from Brighton goalkeeper Robert Sanchez gifted a late goal to Daniel Amartey.

‘Think about his important header against Fulham,’ Rodgers added. ‘His contribution was outstanding. He is a player with real confidence in the 18-yard box.’

It has not been easy for Iheanacho, predominantly a £25million back-up option since he arrived from Manchester City. After a few false starts and a couple of purple patches, he appears to be delivering when it is most needed.

‘I’m happy with the goals that are coming,’ the forward said. ‘We have quality in lots of positions. It’s difficult for the manager, he needs to use everybody, and then we have to have an impact. 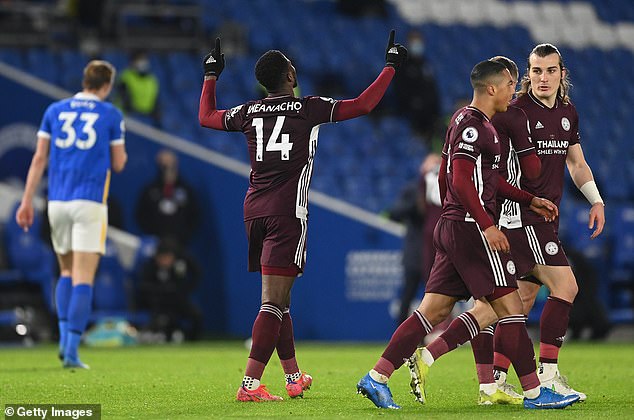 ‘I need to wait for my time, but I’m confident with how things are going. I just have to keep taking the opportunities.’

The wider worry is that scrappy wins over Brighton are rarely a harbinger of great things, particularly when the injury list remains so severe.

Seven were on the treatment table before the Brighton game, including key creative talents James Maddison and Harvey Barnes. Their absence clearly impacts on the service to Vardy, who, aged 34, has also been required to play the full 90 minutes five times in the last two weeks. For now, they are getting by.

As for Brighton, they are in growing danger, despite the occasional delights of their football under Graham Potter.