After the worst A-League season in the club's history, Melbourne Victory rookie coach Grant Brebner is taking no chances on the fitness of his key forward Robbie Kruse and will leave the Socceroos frontman at home when his team travels to Doha for the Asian Champions League later this month.

Kruse missed the end of the A-League season when he injured his knee in training just before Victory began its interrupted campaign in the July restart.

He returned to Brisbane to have knee surgery and Brebner is prepared to do without him in what promises to be a challenging ACL series, rather than risk not having him 100 per cent right for the start of the new A-League season. 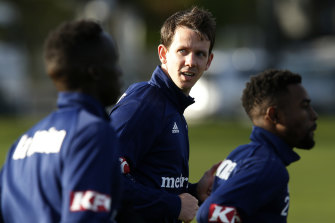 "He has returned ahead of schedule, he is already on the grass and we can't push him until we get the green light from his surgeon. He will be like a new signing for me… but he won't be going to Qatar, it doesn't make sense to take him over there," the coach said.

Brebner said Kruse will rejoin his teammates after they return from the Middle East and go through quarantine in Sydney.

When that will be is uncertain as they still have four games to play in the ACL, with the last group fixture due to take place against FC Seoul on December 4.

Most pundits predict that a much-changed Victory side will struggle to get out of a group, which contains the South Koreans, Chinese Super League side Beijing Guoan and Thai team Chiangrai United.

If they are eliminated at that stage they will come straight home and undergo quarantine, getting out just before Christmas. But if they were to progress it is likely that they might have to spend the festive season in quarantine – and have little opportunity to prepare properly for an A-League campaign, which is due to start in late December.

"It's going to be tough but I have spoken to the players about it – it's not something we're shirking away from," Brebner said.

"I want to win football games and so do the players. We've had enough last year of not winning enough games.

"If it means that we're in a hotel over Christmas and New Year, it means we're doing really well."