Marcos Llorente earns point for Atleti; Diego Simeone’s side still clear of Real Madrid and Barcelona in La Liga but have now dropped points in two of last three games 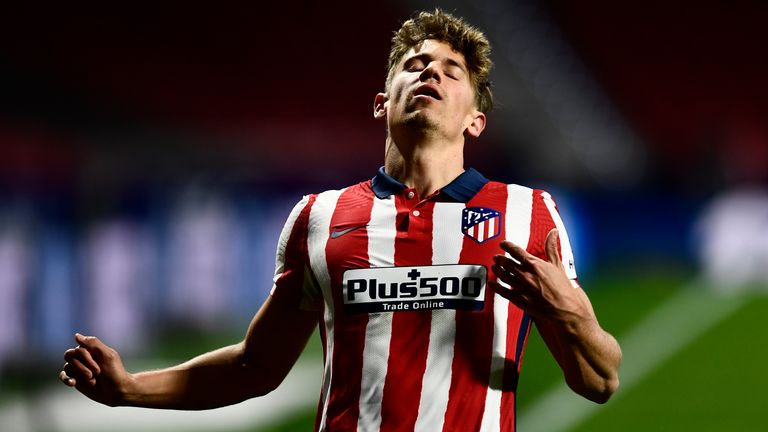 La Liga leaders Atletico Madrid offered some hope to Real Madrid and Barcelona of getting back into the title race after they could only draw 1-1 at Levante on Wednesday.

The game, postponed from the start of the season, offered Atletico the chance to move further away from nearest challengers Real Madrid but Diego Simeone’s side dropped points for the second time in three games.

They are still in the driving seat for a first title since 2014, leading Real by six points – with a game in hand – and Barcelona by nine points, but the chasers will hope for a similar outcome at the weekend when the sides meet again at the Wanda Metropolitano.

Levante, who shocked Real 2-1 last month, went ahead in the 17th minute against the run of play after Jorge de Frutos teed up Enis Bardhi.

Atletico levelled shortly before the break with a speculative shot from Marcos Llorente, which took a heavy deflection off the head of Levante defender Rober Pier to wrong-foot keeper Aitor Fernandez.

Llorente came close with another distance strike which fizzed past the post, while Levante keeper Aitor Fernandez kept out efforts from the league’s top scorer Luis Suarez and midfielder Saul Niguez, who also had a late goal ruled offside.

But Simeone’s side might have taken nothing from the game as it took a top-drawer save from Oblak to prevent a volley from Carlos Clerc creeping into the net in the closing stages.

“We don’t look at the points difference, we’ve gained a point today and we don’t care about the gap, we’ll just keep focusing on winning each game,” said Atletico goalkeeper Jan Oblak.

“We played well but a defensive error cost us a goal. They didn’t have many chances after that and we missed really clear chances and it was down to bad luck that we didn’t win.”