Munich: Robert Lewandowski was among several Barcelona players to rue missed chances on his return to his former team in a 2-0 loss at Bayern Munich in the Champions League on Tuesday (Wednesday AEST).

Elsewhere, a late winner for Liverpool saw off Ajax at Anfield and Tottenham were humbled 2-0 by Sporting Lisbon, the Portuguese club’s first Champions League win over English opposition.

Back for the first time since forcing his transfer between the clubs, Lewandowski was frustrated by his own lack of precision and a tough marking job from former teammate Dayot Upamecano.

Two second-half goals in four minutes from Lucas Hernandez and Leroy Sane were enough for Bayern to claim a fifth consecutive win over the Catalan team, though they needed a vast improvement after the break to do so.

There were some boos from Bayern fans for Lewandowski before kick-off, but mostly applause given his 344 goals over eight hugely successful years at the Bavarian club.

The game started at a furious pace and the first big chance fell to the visitors in the ninth minute when Lewandowski carved out an opening for Gavi to find Pedri, who drew a fine save from Manuel Neuer. 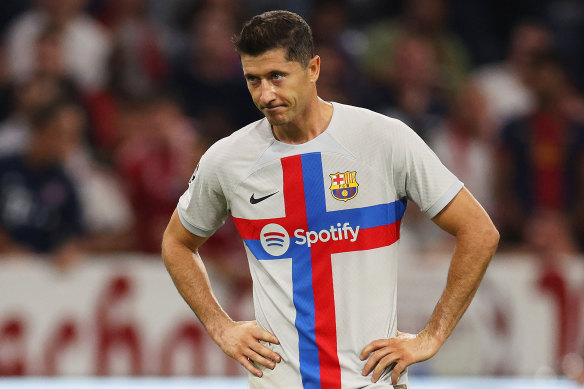 Robert Lewandowski forced a transfer to the Spanish giants after almost a decade in Munich.Credit:Getty

Neuer inadvertently passed to Lewandowski when he was looking for Upamecano shortly afterward. The Bayern goalkeeper was grateful that Upamecano was able to clear the danger.

Barcelona’s players continued to press as Bayern’s looked unsettled. Pedri set up Lewandowski, who uncharacteristically missed from a central position and then went on to miss more good chances.

Barcelona should have had a penalty before the break, when Alphonso Davies brought down Ousmane Dembele, but the referee waved play on and there was no signal from the VAR official. 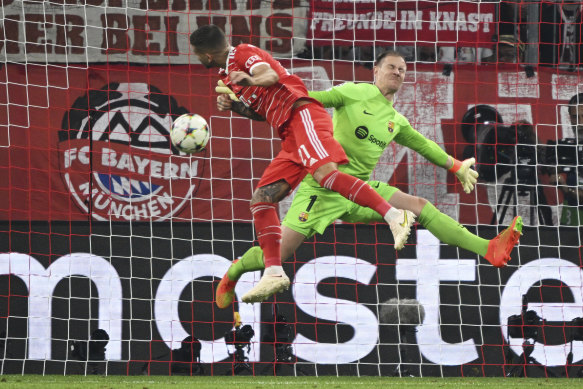 Lucas Hernandez scores the first of Bayern’s two goals in a four-minute period after half-time.Credit:DPA

Raphinha was the next to go close for Barca, before Goretzka let fly to force a good save from Andre ter Stegen.

Hernandez scored from the resultant corner in the 50th, fourth minutes before Jamal Musiala set up Sane to cut through the visitors’ defence for Bayern’s second.

Pedri struck the post for Barcelona in response after a brilliant flowing move involving Lewandowski — it summed up the visitors’ evening.

In Liverpool, Joel Matip headed in an 89th-minute goal — with the aid of goal-line technology — to earn the Reds their first points of this year’s competition.

The centre-back met an outswinging corner from the left with a header that had just crossed the line before it was cleared away by a covering Ajax player.

Liverpool fans held their collective breath inside Anfield before the referee pointed to his watch to signal a huge goal for the English team, who were humiliated in a 4-1 loss at Napoli last week in the opening round of Group A games.

Looking to make amends for that defeat in Italy which manager Juergen Klopp described as the worst performance in his tenure, Liverpool started with intensity and Mohamed Salah ended his run of seven Champions League games without a goal by putting the team ahead in the 17th.

Mohammed Kudus smashed a shot in off the underside of the crossbar for the equaliser in the 27th after Ajax midfielder Edson Alvarez ran in behind Trent Alexander-Arnold and cut a cross back into the penalty area. 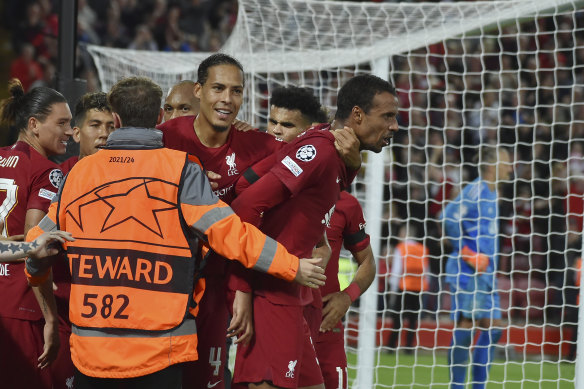 Liverpool were the better team for the majority of an end-to-end game but after Darwin Nunez swept a shot wide and Salah hit a deflected effort against the post, it looked like it wasn’t going to be the home team’s night.

Now, after Matip’s late intervention, Liverpool will head into back-to-back games against Rangers after the international break in good heart.

Tottenham Hotspur suffered their first defeat of the season as Sporting snatched a 2-0 home win over Antonio Conte’s side with goals in added time from substitutes Paulinho and Arthur Gomes.

Spurs created the better chances in an open and entertaining match but Sporting striker Paulinho broke the deadlock in the 90th minute with a glancing header from a corner.

Brazilian forward Gomes, who had only come onto the pitch after the goal, made sure of the victory with a superb strike in the second minute of added time, finishing from close range after a breathtaking run into the box.