Mason Mount has emerged as a key component of Frank Lampard’s Chelsea starting XI after making his senior debut at the start of the season. The 21-year-old has firmly established himself at Stamford Bridge and is winning admiration from none other than Lionel Messi.

Mount was promoted to the first-team squad by manager Frank Lampard at the beginning of the campaign as Chelsea adapted to life under a transfer ban.

The pair had worked together at Derby County the year before and Lampard had enough faith in Mount to throw the youngster in at the deep end alongside fellow academy graduate Tammy Abraham.

Mount handled the pressure masterfully and has gone on to make 41 appearances for the Blues across all competitions so far this term.

The playmaker has scored six goals and provided five assists, while he has shown great maturity to work his way through a slump in form over the festive period and return to his best. 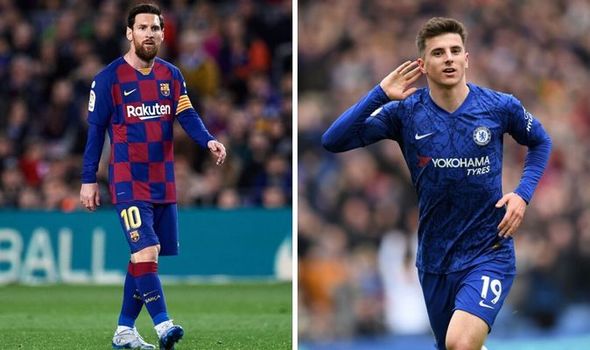 He has also been rewarded with a call-up to the England squad, with Mount making his international bow as a substitute against Bulgaria in September.

And this surge into the limelight has not gone unnoticed around Europe as the Chelsea star draws praise from all quarters.

But it is unlikely that any praise will mean as much as that dished out by Barcelona superstar Lionel Messi.

The Argentine is arguably the greatest footballer of his generation, and potentially all-time, having received a record six Ballon d’Or awards.

Messi has clocked up a staggering 627 goals in 718 games for Barca in all competitions, and the 32-year-old is showing no signs of slowing down with 19 strikes in just 22 La Liga matches this season.

While Messi has clocked up an outrageous total of 10 domestic titles with Barcelona, the forward is equally at home on the European stage and has four Champions League trophies to his name.

The Barca talisman has an astonishing 114 goals from 141 outings in the competition, so there are few better placed to offer their verdict on the greatest Champions League moments.

Messit has partnered with football card manufacturer Topps to compile a set commemorating the tournament, including ‘top talent’ and ‘youth on the rise’ categories.

Mount falls into the latter, with his card featuring a small description of his attributes from Messi.

“Having watched him play he has the potential to be one of the best,” reads the caption.

High praise indeed, coming from someone who has achieved so much in their career.

Mount has some way to go before he can start comparing himself to Messi, but he is certainly going about things the right way at Stamford Bridge.

And his manager Lampard has been suitably impressed with his efforts.

After the win over Tottenham in February, the Chelsea manager said: “I hope Mason’s performance gets digested properly today.

“A lot of people talk about Mason, they look at his goals. The work rate and sharpness in his game today was unbelievable.”