Liverpool boss Jurgen Klopp had a special message for the bench just ten seconds before the final whistle blew against Chelsea. The Reds were about to get their hands on the Premier League trophy after an agonising wait to end 30 years of hurt.

Many had tried and failed but the German was the man to deliver the prize the club wanted most in breathtaking fashion.

First of all, they had to ensure they were starting the title party on the right note by taking care of Chelsea.

Liverpool were made to work for it but got there in the end, edging the Blues 5-3 in an eight-goal thriller which the hosts led 4-1 early in the second half.

But Chelsea fought back to within a goal of Liverpool before Alex Oxlade-Chamberlain put the icing on the cake off the bench. 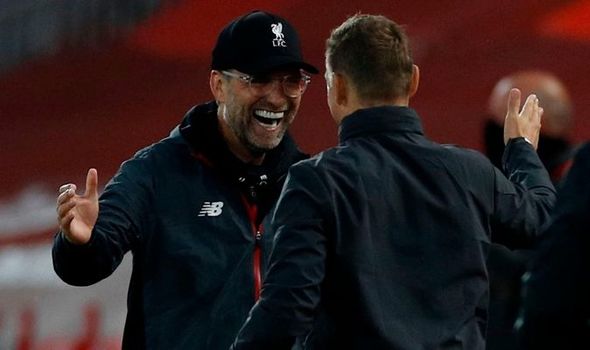 Naby Keita, Trent Alexander-Arnold, Gini Wijnaldum and Roberto Firmino were also on target with the Brazilian scoring his first Premier League goal at Anfield at the last given opportunity.

According to journalist Matt Critchley, Klopp had a unique message for those gathered on the Liverpool bench just before the full-time whistle.

He shouted: “Enjoy this moment. This is a very special night.”

Klopp was the first up to the stage on Wednesday night as the players and staff collected their medals.

He bounced around the platform cheering and clapping each member of his backroom team and squad as they made their way up into the Kop.

Before they were given the green light to make their way to the stand, Klopp told the players to be careful of injured captain Jordan Henderson, who is nursing a knee injury.

That didn’t stop him from pulling out his trademark shuffle though as he lifted the trophy.

Klopp has since told supporters to prepare for a party once the coronavirus pandemic completely settles. 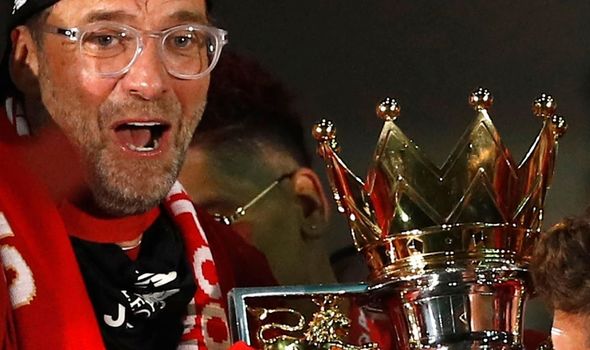 “What can I say? If you can’t see that we do it for you then I can’t help you, really,” Klopp told Sky Sports when asked if he had a message for the fans.

“Five years ago I asked you to change from doubters to believers.

“Five minutes before that press conference I had no idea that I would ask that but I asked it and you did it.

“We should all together celebrate together but stay home, safe, drink what you want but you have to prepare for a party, when I don’t know when.

“When this bulls*** virus is gone then we will have a party all together.

“Make sure you’re already there, thank you very much.”