Liverpool are reportedly set to be without winger Luis Diaz until after the Qatar World Cup this winter. The winger sustained a knee injury against Arsenal on Sunday which forced Jurgen Klopp into replacing the forward.

Diaz has been one of the Reds’ saving graces so far this season and prevented their underwhelming start to the campaign from being horrific, scoring three and assisting two in eight Premier League appearances. The 25-year-old has been relied upon heavily to provide a spark in the final third by Klopp, with Diaz’s team-mates failing to meet the mark.

But Liverpool will need to quickly adjust so that they are able to get their campaign back on track without the former Porto star, with The Athletic reporting that the Reds will be without Diaz until after the World Cup at the earliest after sustaining a knee injury following a heavy challenge from Thomas Partey.

Diaz will not be available until December now, though the silver lining to the news is that the winger will not require surgery, which would have led to him enduring a significant spell on the sidelines. 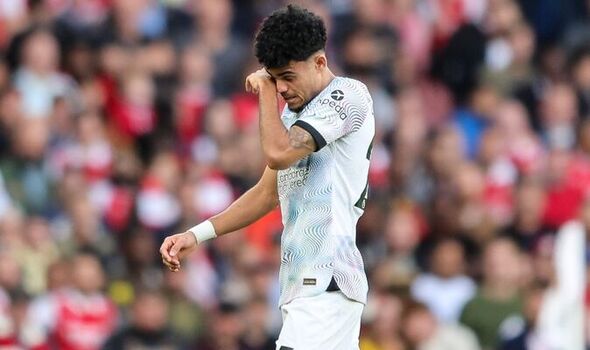 Liverpool are certainly not short of depth in the final third, though Klopp will be hoping that Mohamed Salah and Darwin Nunez can overcome their tricky starts to ensure that Diaz’s absence does not derail their campaign entirely given how busy his side are for the next few months. Young talents Harvey Elliott and Fabio Carvalho could also be called upon by their manager, with Diogo Jota also now back to full fitness.

The Reds are currently 10th in the Premier League and were beaten 3-2 by Arsenal on Sunday, with the north London outfit confirming that they are the likeliest contenders to compete with Manchester City for the title. And to make matters worse for Klopp, his injury list is beginning to grow once more. 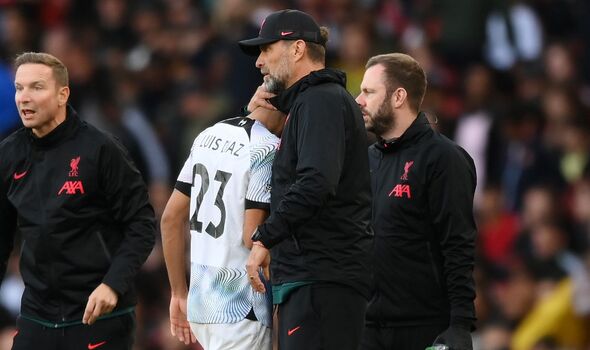 Just moments after Diaz was substituted for Roberto Firmino in the 42nd minute, it became apparent that out of sorts right-back Trent Alexander-Arnold couldn’t recover from an ankle injury, with Joe Gomez replacing the England international at half-time. Speaking after the defeat to the Gunners, Klopp said: “Lucho (Diaz) we had to change before [half-time]. [It’s] something with the knee, not good.

“He will have a scan and then we will know more. I have no idea about the extent and then on top of that Trent is bad as well with the ankle. [He] twisted the ankle, not good. Trent never, in seven years, went off if he could have played on. He was in too much pain, it started swelling immediately, so we will have to see.”