Liverpool legend Steve Nicol has hit back at recent comments Germany great Michael Ballack made about Virgil van Dijk. Ballack claimed Van Dijk was fortunate to play in the current era of the Premier League where he’s not up against the likes of Thierry Henry and Didier Drogba. The Dutch centre-back is widely regarded as the world’s best centre-back but Ballack says that is because of the standard of opposition in England.

“No wonder they think he is the best defender in the League.”

However, Nicol disagrees with Ballack that Van Dijk would struggle against any of the players he named.

And the ESPN FC pundit wants to know which part of Van Dijk’s game Ballack thinks would be exposed. 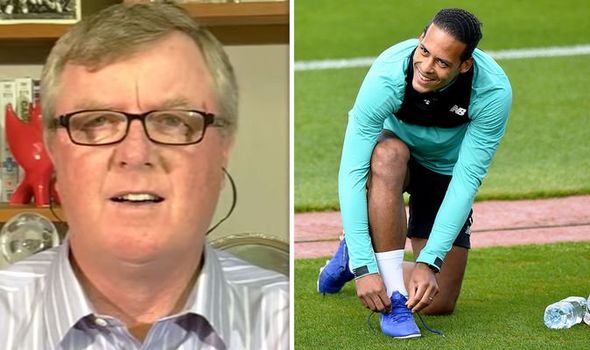 Nicol said: “Well I’m interested to know which part of his game he’s not happy with because if you’re looking for a physical battle, are you telling me that Van Dijk couldn’t beat anybody up physically? Even Drogba?

“It would be great to watch but don’t tell me that Drogba would walk all over him physically.

“Pace-wise I don’t remember seeing anybody, whether it’s the Premier League or the Champions League, running past this guy. So that’s not a problem.

“Can he pass the ball? Yes he can pass the ball. I’d love to know which part of Van Dijk’s game he thinks would be susceptible to any of these strikers that he was talking about.”

“I think you’re demeaning this player. This player’s a Rolls Royce, he really is. I don’t think you should demean him in terms of if there was a better standard of striker years ago or not.

“The guy’s doing it at every level and we’ll see him do it for Holland at the Euros when that comes around as well.”

Related posts:
Basketball News:
Anthony Joshua and Tyson Fury facing pay cuts once boxing properly returns
Chelsea dealt Jan Oblak transfer blow despite Atletico star hinting at exit
Barcelona tipped to sack Quique Setien TONIGHT after Bayern Munich clash
MLB News:
2020 Fantasy TE PPR Rankings: Is Mark Andrews a potential tight end bust after breakout season?
‘Right is right, and wrong is wrong’: Browns QB Baker Mayfield stands firm on vow to kneel during anthem
Reuben Foster: 'Kind of nerve-racking' returning to field after missing nearly two years
Recent Posts
This website uses cookies to improve your user experience and to provide you with advertisements that are relevant to your interests. By continuing to browse the site you are agreeing to our use of cookies.Ok