Nat Phillips has opened up on the strong relationship he shares with manager Jurgen Klopp and admits his boss sees similarities from his own game when he was a player.

Phillips has emerged as Liverpool’s surprise star of the season after coming to the Reds’ aid following a mass injury crisis in defence.

Following season-ending injuries to both Virgil van Dijk and Joe Gomez, with Joel Matip joining them in the treatment room shortly after, Phillips was rocketed from a fifth choice centre back to the main man. 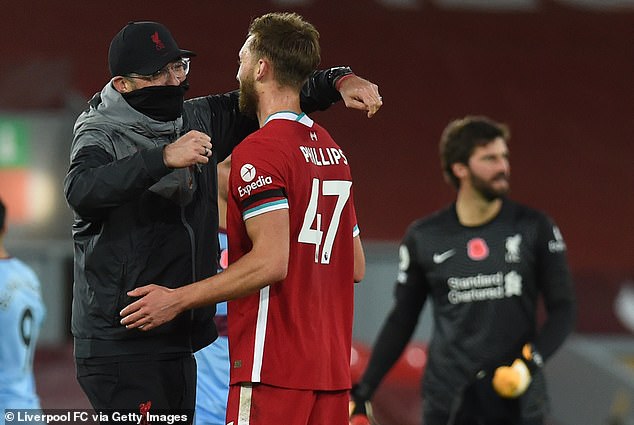 Since, the Bolton-born star has earned rave reviews for his old school approach to defending and admits he shared many similar traits to his manager.

Speaking during an interview with the Times, Phillips said: ‘I think we’re quite similar as people, quite similar in sense of humour and I know I’m not the most pleasing on the eye — when you compare me to someone like Virgil [van Dijk] and how cool and calm he looks.

‘By all accounts from the manager, he was the same. I’ve heard him describe himself as having a first division brain but third division feet and I think that’s where he draws the similarities. And I think it gives him joy to see someone like me succeed.’ 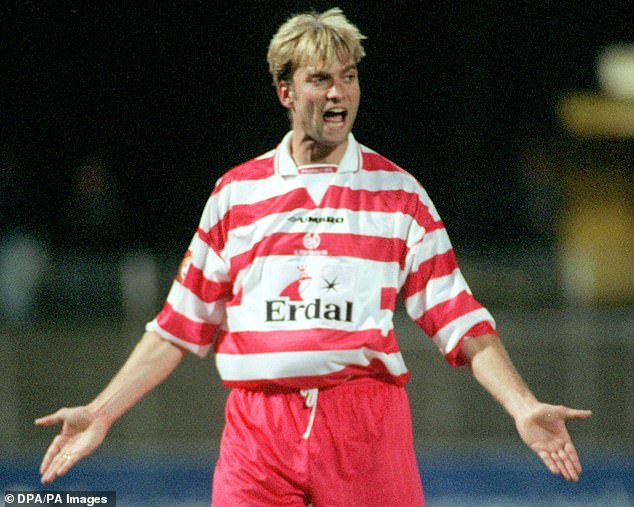 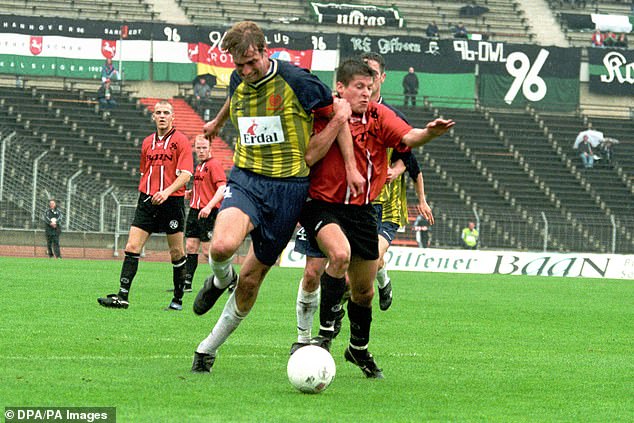 Klopp, like Phillips, was noted for his lumbering, old school style of play in defence

Phillips has been on Klopp’s radar for several years, after being promoted to the first team ranks in 2018 after shortages. A loan move to Germany would follow, in which Phillips impressed with Stuttgart.

Noting his introduction to first team life on Merseyside and working with Klopp, Phillips explained: ‘I went up initially just to be a mannequin, for shape drills.

‘What impressed him was [my] training and my ability to take information on board and learn.’

The youngster recently turned in a Man of the Match performance against Spanish giants Real Madrid, as Liverpool peppered their opponents goal but failed to get the two goals needed to progress to the Champions League semi-finals.

Phillips however was enriched by the experience, and admits he worked hard on his game between both legs in order to improve on mistakes and keep the likes of legendary striker Karim Benzema in check. 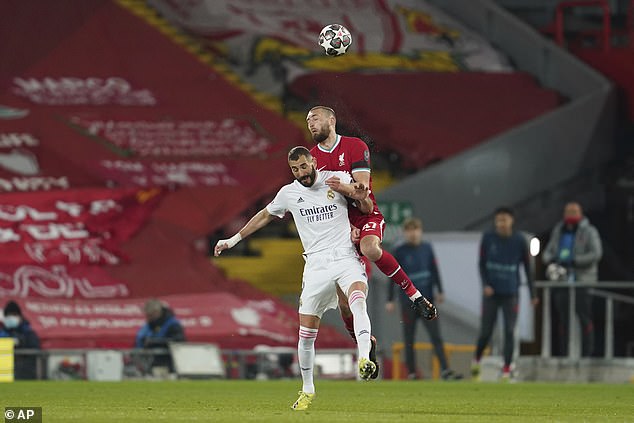 He added: ‘I watch clips on strikers before every game and knew Benzema was going to be involved in the link-up play but take very few touches, and the most difficult aspect would be keeping track of his movement around the box.

‘With him, that’s what I concentrated on. I think I did all right.’

Phillips and Liverpool return to action on Monday night, when they face Marcelo Bielsa’s Leeds United at Elland Road.

Victory for the Reds would put them up into fourth place, level on points with West Ham United following their defeat to Newcastle on Saturday.