Liverpool star Thiago was booked within the first five minutes of his side’s Premier League clash with Manchester City for a foul on Ilkay Gundogan which led Jamie Carragher and Gary Neville to compare the Spain international to a Manchester United legend.

Thiago has struggled to nail down a permanent spot in Jurgen Klopp’s starting XI since joining from Bayern Munich on a free transfer.

The 29-year-old has only won three of his first 10 appearances for the Reds.

He has been booked on four occasions, the latest for a tackle on Gundogan which left the City ace requiring physio treatment.

“There’s been a lot of chat around Thiago,” Carragher said. “What he brings. What he doesn’t bring to this midfield. It’s different. 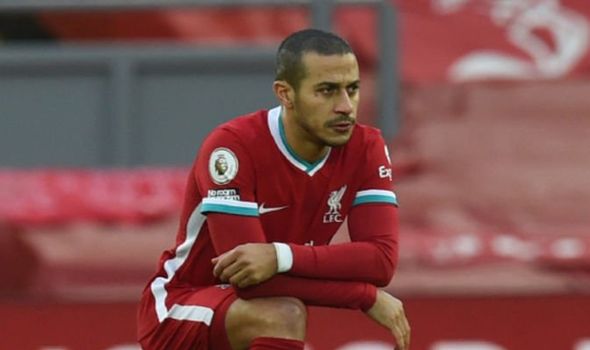 “What he does bring is plenty of fouls. He’s aggressive. Doesn’t normally get it right. Paul Scholes like?”

“Yeah he’s turned his ankle there.

“The thing is with Thiago he’s such a silky football player he almost gets away with that little naught aspect of his game.

“You mention Paul Scholes, there is a little bit of that in him because he makes a lot of fouls in the game. He’s tenacious.”

Carragher continued: “He does win that type of tackle at times but he’s almost what we call, coming from the wrong side. Wrapping his leg around.”

Ahead of the match Klopp hailed his summer signing, who has not had a regular midfield partner because of injuries.

“The situation is far from perfect, injured, ill, but not too important any more,” Klopp said. 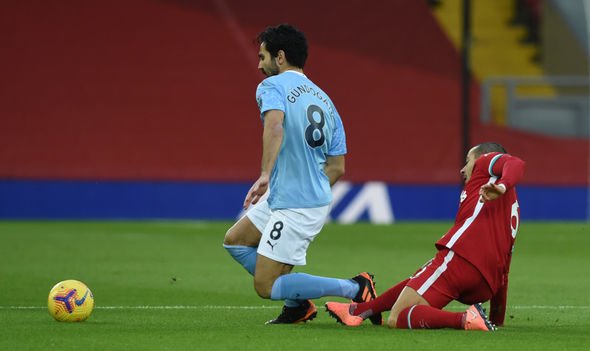 “We and he had to learn how to play without changing everything.

“He was 6 at Bayern but we decided to adapt his position a bit. Worked out well. Stability, we can use his skills.”