The appointment of a new assistant and the return to fitness of two key midfielders has convinced beleaguered Western Sydney Wanderers coach Carl Robinson he can save his job and turn around the club’s A-League Men fortunes.

It has been three weeks since the Wanderers last took the field in a 2-0 defeat to the Central Coast Mariners, a result which prompted former coaches Patrick Zwaanswijk and Dean Heffernan to allege the team’s underachievement over the past five years was due to a poor culture overseen by chief executive John Tsatsimas and football operations boss Gavin Costello. 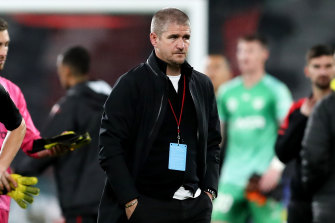 It seemed as if things were coming to a head for the club and Robinson, who has failed to show any progress after 14 months in the job, but then came the Omicron surge. The COVID outbreak triggered a series of postponements and saw as many as seven players in Western Sydney’s men’s program test positive over the Christmas-New Year period.

Robinson says he had his full squad available to train together only twice during that time, but used the layoff to hone in on the Wanderers’ problems and their failure to score more regularly.

Jack Rodwell and Keanu Baccus are also now both fit. It is a huge boost for Western Sydney before Sunday’s clash with reigning champions Melbourne City, which was hastily scheduled for AAMI Park after both teams had other fixtures cancelled due to coronavirus cases.

Newly appointed assistant coach Gary van Egmond may also have provided Robinson with a fresh perspective on selection and tactics. 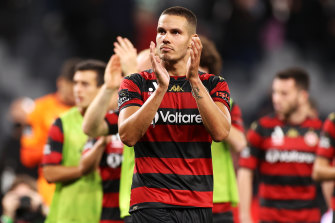 The return of Jack Rodwell is a huge boost for the Wanderers.Credit:Getty Images

Although many fans speculated the Wanderers were preparing to sack Robinson by bringing in van Egmond as a possible caretaker coach, the Welshman said it was his call to bring him in to fill the void left by the departure of previous assistant Kenny Miller in pre-season.

“We’re delighted to have Gary in. I think everyone knows that I lost my assistant, Kenny went back prior to the season for family reasons, so we’ve been working a little bit short,” he said.

“I wanted to bring in a coach, and it’s easier to bring an Australian coach than a foreign coach as well.

“Gary’s got pedigree – you probably know more about Gary than myself, but what I do know is he’s good on the field, good coaching the kids, he’s been involved in international programs for many years, so he knows all the talented players coming through, he knows what they like and dislike. And it’s nice to have another pair of hands to help on the field. I get on great with him at the moment.”

Robinson said he had cleared the air with the club’s hierarchy, including chairman Paul Lederer, after Zwaanswijk and Heffernan aired their views on Western Sydney’s predicament on social media, but admitted only good results would keep him in the job.

“I nipped that one in the bud,” he said.

“I speak to Paul and JT on a regular basis, we have open, really good communication and a strong relationship. I’ll continue to work hard with them, we all want the same goal. We’re no different to the supporters or the players, we want to win games of football … the only way you do that is by sticking together and working hard. If you don’t do that, eventually the end comes. If you do work hard, stick together and get behind it and you’re all on the same page, usually good things happen.”

“We started decent, and then we’ve had two really difficult games where we’ve not performed at our levels. We own that, we have to admit that, but sometimes a break can do you good. We’ve got to use that as a positive,” he said.

“Those two games, we didn’t pick up the results we wanted. We get into so many really good areas, but our final actions, our final products, our final pass, our final shot wasn’t there. We’ve worked across the board … if you could come to training and see, which I don’t think you’re allowed at the moment, you’d see the boys score goals for fun. It’s just a case of trying to replicate what we do there on a match day. And we will.”

Coverage returns on February 16 for the UEFA Champions League Round of 16.