Do Man City need to sign a striker this summer?

Pep Guardiola has reportedly identified Jack Grealish as Manchester City’s ‘top priority’ in the summer transfer window, if Bernardo Silva leaves the club. City are preparing their strategy for the off-season after losing to Chelsea in the Champions League final and are expecting a busy period.

Guardiola’s side are sure to sign new players once the window opens for 12 weeks on June 9, having already confirmed the departures of two first-team players.

Sergio Aguero and Eric Garcia are both set to join Barcelona when their contracts expire at the end of the month.

City are therefore in desperate need of a striker to replace Aguero, who leaves after 10 years of being the club’s mainstay in attack.

A world-class goalscorer is the obvious priority, with Tottenham’s Harry Kane, Borussia Dortmund’s Erling Haaland and Inter Milan’s Romelu Lukaku on their radar.

However, there will be other needs for City, who will once again try to break their duck in the Champions League next season.

Reports have suggested some established players could be set to leave this summer, with the club potentially open to bids for Aymeric Laporte, Gabriel Jesus, Raheem Sterling and Riyad Mahrez. 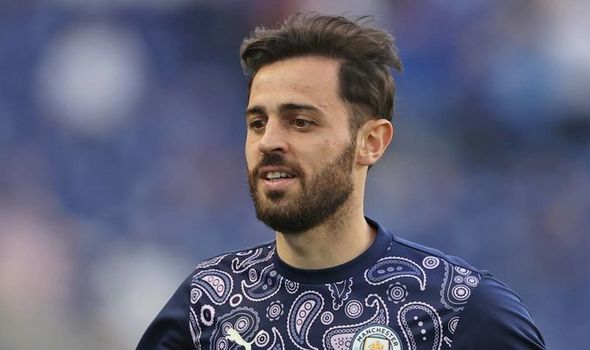 Another possible departure is Silva, who has caught the eye of Atletico Madrid manager Diego Simeone, according to France Football.

The report states Atletico have been monitoring Silva for ‘many years’ and could ‘take advantage’ of their good relationship with Silva’s agent, Jorge Mendes, to move forward with a transfer.

Silva made 45 appearances across all competitions for Man City last season, contributing five goals and eight assists for Guardiola’s side.

The 26-year-old joined City from Monaco in 2017 for around £43million and has been a regular in the team which has won three Premier League titles, four Carabao Cups and the FA Cup.

However, The Telegraph has reported Silva could be one of the victims of a reshuffle after City’s failure in the Champions League final.

If that happens, France Football says Guardiola wants Grealish as a replacement, because the Aston Villa midfielder has impressed him over the past few seasons.

Grealish contributed six goals and 10 assists in 26 Premier League games for Villa last season and is set to be a key player for England at the European Championships this summer.

The 25-year-old has previously been linked with Manchester United, but signed a new contract in September until June 2025 with his boyhood club.

Villa have previously rebuffed any approaches for the playmaker, but it seems City could be ready to test their resolve this summer.

City chairman Khaldoon al-Mubarak said on Tuesday that the club are preparing to invest in the squad in the off-season, not just replace Aguero.

“There are other areas in the team that need investment,” he said. “Not too many – it is not about numbers, it is about quality. But we will bring quality into the squad in a couple of key positions.”