Manchester City are reportedly ready to sanction the sales of four first team regulars in order to sign Tottenham striker Harry Kane this summer. City are on the lookout for a new striker to replace Sergio Aguero and have identified Kane as a possible target.

Aguero will join Barcelona on a two-year deal when his Man City deal expires at the end of June, leaving the club with a clear need in the transfer window.

The 32-year-old striker scored 260 goals in 390 games over 10 years with City and will leave a huge hole in Pep Guardiola’s squad.

Kane is an obvious target, with the 27-year-old having made it clear he wants to leave Tottenham this summer.

The Spurs striker is set to try and force an exit from the club in the transfer window, which officially opens on June 9.

However, the fact he still has three years left to run on his Tottenham contract places chairman Daniel Levy in a strong position. 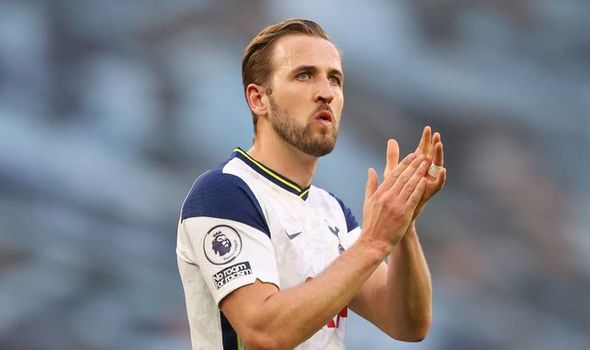 Spurs do not want to sell their talisman, who contributed 33 goals and 17 assists in 49 games over the 2020/21 season, and will drive a hard bargain if he does leave.

Man City, Manchester United and Chelsea are all reportedly interested in signing Kane but Guardiola’s side could be prepared to go the furthest to secure his signature.

According to The Athletic, City would consider bids for Riyad Mahrez, Raheem Sterling and Gabriel Jesus, while Aymeric Laporte is thought to be the most likely to leave in order to raise transfer funds.

The report says that while Kane has made City his first-choice destination, City know it will not be an easy transfer to pull off.

Levy does not want to sell Kane under any circumstances but is thought to be particularly reluctant to do so to a Premier League rival.

In order to make a compelling offer, City may need to sell some of the players who helped them win the Premier League and Carabao Cup in 2020/21, although ‘there is a recognition that in the current market, it could be a quieter window than planned.’

The Sun claims City are prepared to offer Sterling and Jesus to Tottenham as ‘bait’ to sweeten the deal.

Meanwhile, the Daily Mail say Tottenham have picked Jesus and Nathan Ake as the two City players they would most like to sign as part of a deal for Kane.

Sterling contributed 14 goals and 10 assists in 49 appearances for City last season, but endured an up-and-down campaign by his high standards.

Jesus scored 14 goals and registered four assists in 42 appearances, while Mahrez had 14 goals and nine assists – including some important strikes on the road to the Champions League final.