History made! Man United Women claim victory over West Ham in their first ever match at Old Trafford, with Lauren James and Christen Press netting before Laura Vetterlein is shown red for visitors during WSL clash… which wasn’t shown on TV

Manchester United Women marked their historic day at Old Trafford with an important victory over West Ham as they continue to chase a place in the Champions League next season.

This was the women’s first game at the Theatre of Dreams since the team was launched in 2018 and second half goals from Lauren James and Christen Press made for a memorable occasion.

United were one of the few clubs not to have staged a game at their men’s ground with Stoney insisting they first wanted to sell out their home at Leigh Sports Village. 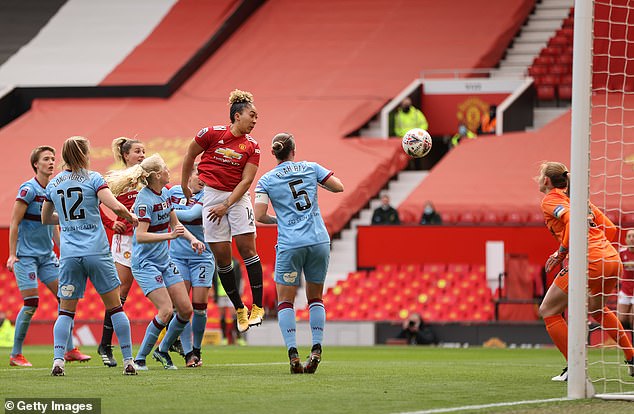 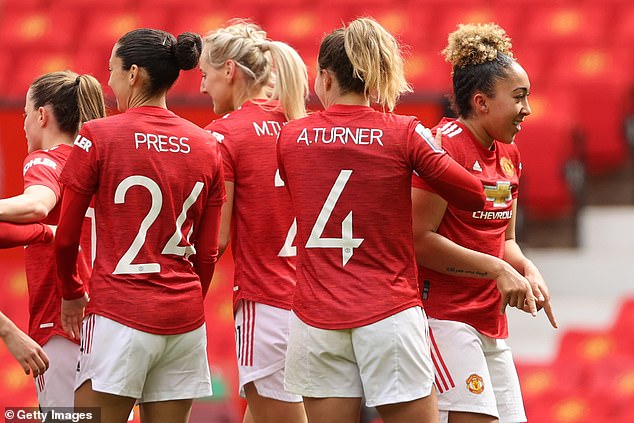 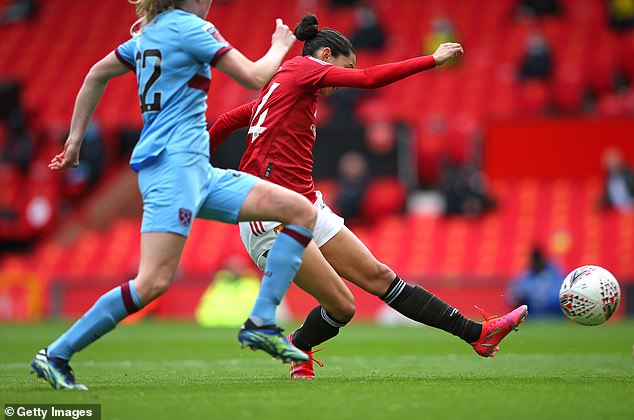 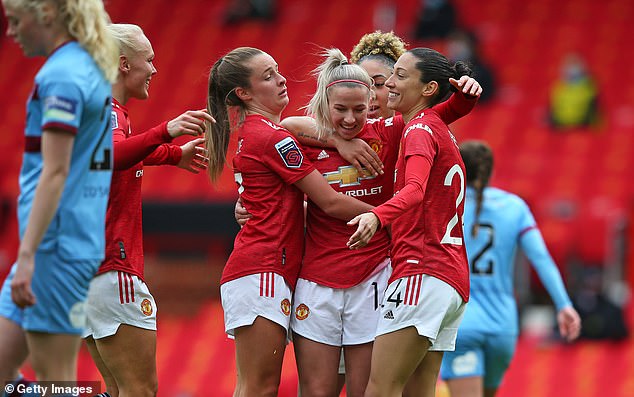 With that not currently possible due to games taking place behind closed doors, Stoney said she decided to take the opportunity to play at Old Trafford partly because she had ‘got sick of the questions’ but also to lift her players.

The Red Devils went into the game off the back of a 2-0 defeat by Arsenal last week, a result which meant Champions League qualification is now out of their hands.

United had been realistic title contenders up until February before three defeats in four games saw them fall eight points behind leaders Chelsea and six behind Manchester City.

Injuries to Leah Galton and Tobin Heath, their second and third top scorers, have not helped their cause.

They faced a West Ham side who are in the thick of a relegation battle and without a win in the league under Oli Harder, who took over from Matt Beard in December.

Unsurprisingly, it was the home side who dominated possession in the first half but they were unable to create any real chance of note.

Press had the best opportunity to tee up James just before half-time but her cross was well cut out by Grace Fisk.

West Ham’s bank of five defenders stood firm with United managing just one shot on target before the break. 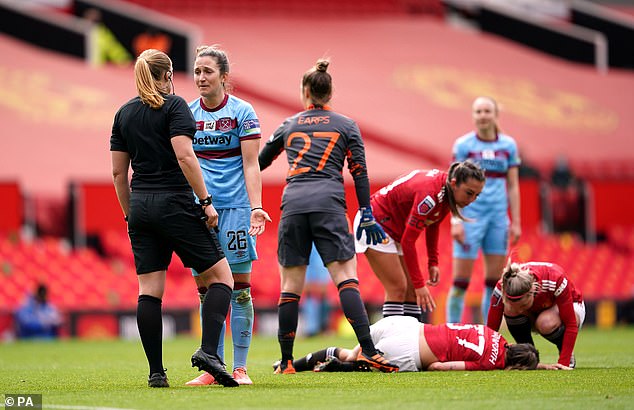 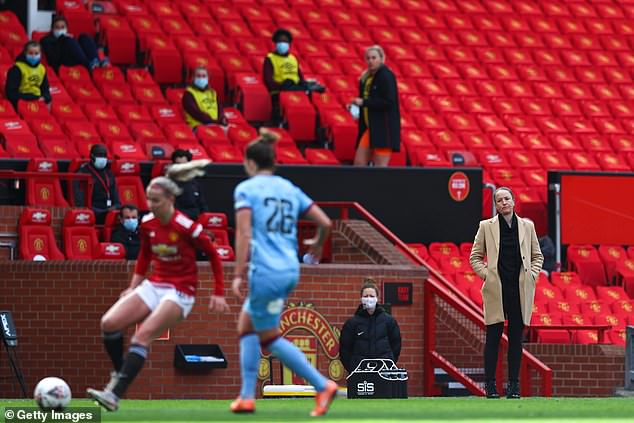 Stoney needed a reaction from her players in the second half and on 48 minutes she got one. A United corner was swung to the back post with Maria Thorisdottir heading down for James to nod in from two-yards out.

This was only James’ second start of the season after several injury problems but the England midfielder showed just how vital she will be United’s run-in for the rest of the season.

It was soon 2-0 when Press finally ended her long goal drought in the 55th minute.

The American had summed up United’s frustrations in the first half, the American taking heavy touches and overthinking her final pass.

The forward has not quite lived up to the expectation since her summer arrival. But if anyone was going to turn up on the big-stage, it was her.

An exquisite through ball from Jackie Groenen played Press through on goal and she produced a clinical finish to lift over the on-rushing Courtney Brosnan. 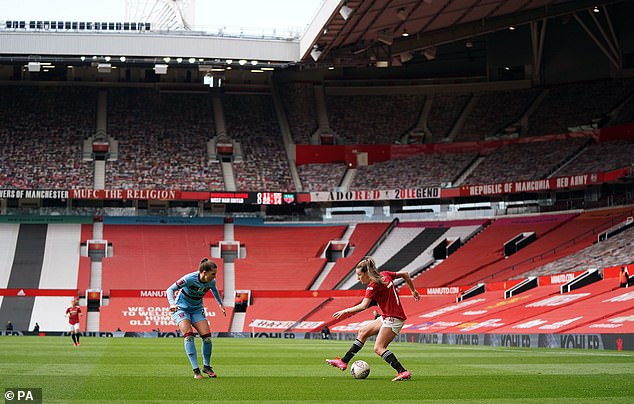 Press was inches away from making it 3-0 moments later with her curling effort heading towards the top corner but for the fingertips of Brosnan.

United goalkeeper Mary Earps had been an on-looker for most of the afternoon but she had to be alert to twice Dagny Brynsdottir just past the hour mark, first saving with her feet before tipping a header past the post.

That was the best the visitors managed and it got worse when Laura Vetterlein was sent off for a second bookable offence later in the half.

For United, however, it was a day to remember and a much needed win. The only disappointing note was that it was taking place in the absence of supporters but Stoney is confident they will get another chance to play at the Theatre of Dreams next season. 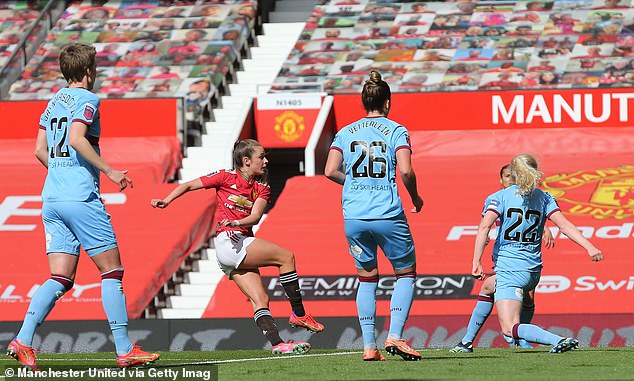 Despite the historical day in Manchester and with a lack of football on this weekend, the match was to United’s frustration not selected for television.

Club officials had been left stunned after their plans to broadcast Saturday’s match to the biggest audience possible hit a bureaucratic brick wall.

The club announced the symbolic switch from their usual Leigh Sports Village venue after broadcasters BT Sport and the BBC had made their picks.

However, they expected some flexibility from the channels, which was not forthcoming.

Instead, the only place to watch the game was through the FA Player or on BT Sport via the red button.

Sportsmail revealed on Friday that United, at their own expense, had paid for multiple cameras and an outside broadcast team for the game, as the FA Player only uses one. They were concerned that a single camera operation would devalue the event. 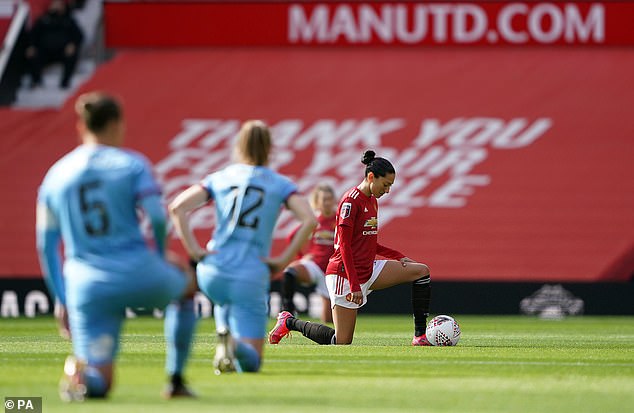 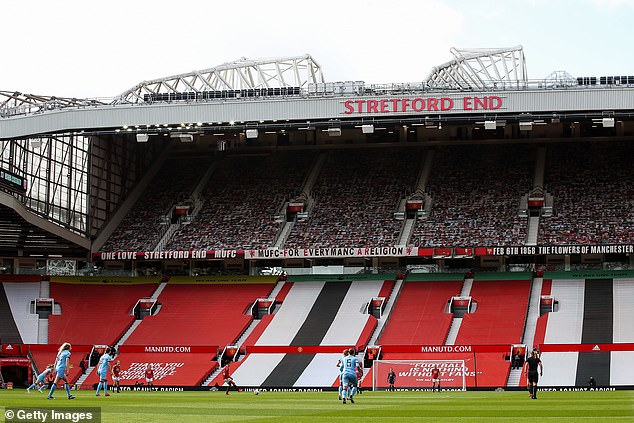 Bearing in mind that gesture of goodwill, United also asked the FA if they could screen the match on MUTV for free — meaning hundreds of thousands of people could tune in to watch the landmark occasion for the sport.

However, that suggestion was met with a point-blank refusal, which subsequently caused much confusion.

Rules dictate that clubs can only broadcast a maximum of three matches on their own channels and United have already done so. Despite their request, no exception had been made. United declined to comment, but insiders said they have been left ‘astonished’ by a perceived lack of cooperation.

‘This is an ideal opportunity missed,’ they explained.

‘This is the biggest club in the country making a statement on a weekend when there is no Premier League or Championship football and we’re passing up the chance to get it in front of as many eyes as possible.’ 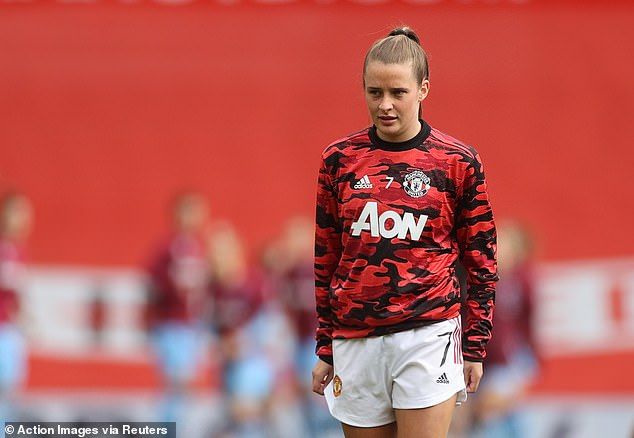 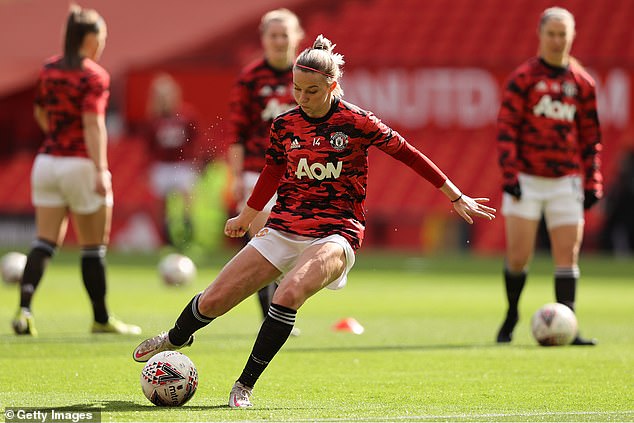