Manchester United have an agreement on personal terms with Ajax duo Antony and Lisandro Martinez, according to reports. United are keen on signing both players but Ajax want a combined £106.1million for the duo.

Both Antony and Martinez are said to want a move to Old Trafford this summer. However, Ajax will not make it easy for the Red Devils, while Arsenal are also in the race for Martinez.

United boss Erik ten Hag knows both players well having managed them during his time at Ajax. And he is keen to make them his next two signings after the arrival of left-back Tyrell Malacia earlier this week.

The Daily Record claims personal terms have already been sorted with both Antony and Martinez. Now it is down to the clubs to sort out a fee. 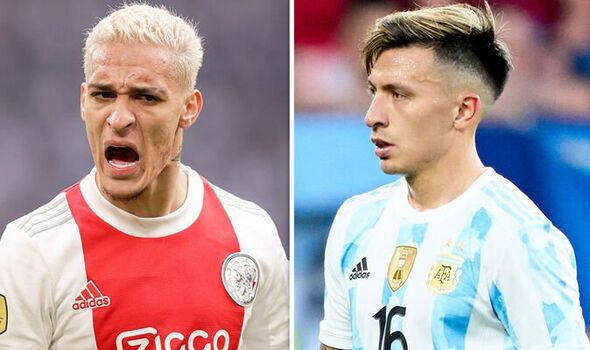 Ajax want a big profit on both players but the pair are putting pressure on the Eredivisie champions to accept an offer. But Ajax are not set to budge from their asking price of £106.1m.

Ten Hag signed Martinez for Ajax from Argentinean side Defensa y Justicia in 2019 and he has already made 120 appearances for the club. The 23-year-old can play in central defence, at left-back and also in defensive midfield.

Winger Antony arrived from Brazilian outfit Sao Paulo a year later and has been a regular starter since. He missed the back end of last season due to an ankle injury.

Ten Hag clearly has a plan to sign players he knows well this summer. He is also interested in bringing in Barcelona star Frenkie de Jong.

De Jong played under Ten Hag for two seasons before leaving for Barca in 2019. However, United are struggling to agree a fee for the 25-year-old.

The arrival of Malacia also points to Ten Hag’s knowledge of the Dutch game. On signing for United, the left-back said: “It’s an incredible feeling to have joined Manchester United.

“This is a new chapter for me, a new league with new team-mates and a tremendous manager [Erik ten Hag] leading us. I know from playing against his teams in the Eredivisie, the qualities that he has and what he demands of his players.

“Whilst I know that I am still young and will continue to develop, I can promise the United fans that I will leave everything on the pitch every time I pull on the red shirt. I’ll always be thankful to Feyenoord for all they have given to me and my family.”