Manchester United should “move on” from Jadon Sancho if Borussia Dortmund are demanding too much money for the winger, according to former England boss Sam Allardyce. Sancho is United’s top transfer target for the summer window. However, Dortmund sporting director Michael Zorc stated on Monday that the 20-year-old would remain with the Bundesliga club next season.

United, as of yet, have not been willing to match Dortmund’s asking price of £108million for the England star.

Allardyce believes Dortmund are playing a game, hoping United will give in and pay what they are demanding.

However, he says United are not desperate to sign a winger and should instead look to buy a striker rather than over-spending on Sancho. 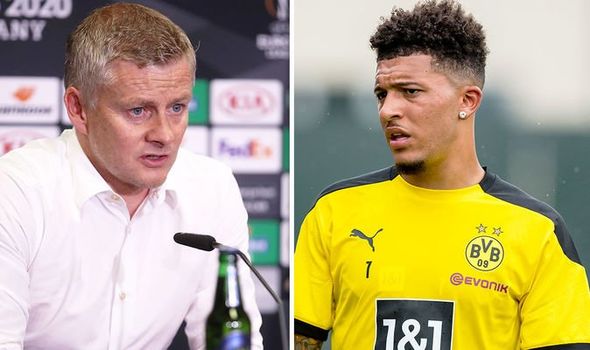 “Borussia Dortmund are playing a game, I think they’re being very clever by saying he could leave before and now saying he can’t, in the hope Manchester United are so desperate they’re going to up the fee to so many more millions to get their man.

“That’s a tricky situation for Man United – how important is he to them?

“I personally feel another centre forward would be more appropriate for Manchester United at this moment in time.

“It’s nothing against Jadon Sancho because he’s a fabulous player, but Mason Greenwood, Marcus Rashford, Daniel James and Anthony Martial can all play in the wide positions, and Sancho isn’t a centre-forward.

“With the players they’ve already got, do they need another player in other left or right positions, rather than more importantly getting a new striker? I think that would benefit them more.

“How much do you want to pay? Do they have alternatives? It’s very difficult for Ole Gunnar Solskjaer, because if Dortmund are asking for too much money you have to bite the bullet and move on.”

At a press conference on Monday, Dortmund chief Zorc also revealed Sancho’s contract at the club runs until 2023 – a year longer than originally thought.

“We plan on having Jadon Sancho in our team this season, the decision is final,” Zorc told reporters.

“I think that answers all our questions.

“Last summer, we adjusted Jadon’s salary to match the development of his performances.

“So in context, we had already extended his contract until 2023 back then.”