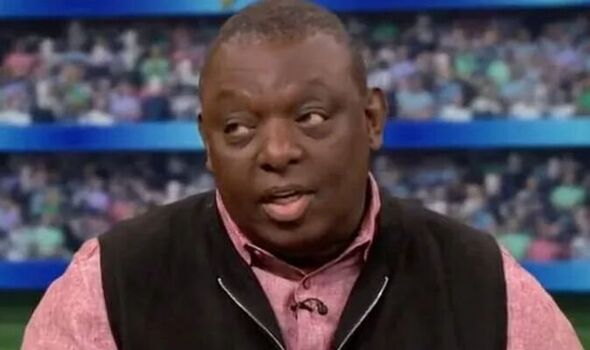 Liverpool and Chelsea stars Mohamed Salah and Mason Mount are among those to be named in Garth Crooks’ team of the week after stellar individual displays at the weekend. The BBC pundit carefully chooses 11 players in a lineup based on their performances for their respective clubs and it was Mount and Salah who stole the limelight this week.

Salah, who has endured a difficult start to the season by his standards, scored the all important winning goal as Liverpool battled to a 1-0 win over Manchester City to end their unbeaten start under Pep Guardiola.

The 30-year-old burst through on goal after beating Joao Cancelo following a huge throw from Alisson Becker and coolly slotted past Ederson after 75 minutes, earning him a place in Crooks’ front three.

Crooks gushed about the forward’s return to form, writing for BBC Sport: “You couldn’t take your eyes off the Liverpool-Man City match and it was Mohamed Salah at his best. He scored a hat-trick in midweek in the Champions League against Rangers and so was in the mood against City.”

He was not the only Reds player recognised for their excellence at Anfield. James Milner and Joe Gomez, playing out of their natural position at right-back and centre half, were credited for keeping Phil Foden and Erling Haaland off the scoresheet and deserved their inclusion.

Crooks even suggested Gomez, 25, should be a certainty to make Gareth Southgate’s England squad when announced next month: “Man City dominated much of this encounter but at no time did they dominate Gomez. The defender looked backed to his focused and committed best. In fact, the game brought out the best in the England defender and on this form is a must for Qatar.”

Away from the Liverpool win over City, Chelsea continued their fine start to life under Graham Potter with a fifth straight win in all competitions after a 2-0 victory at Villa Park over struggling Aston Villa. Mount’s early volley and brilliantly-executed free-kick made the difference to pile the pressure on under-fire boss Steven Gerrard, and he was joined by team-mate Thiago Silva in Crook’s favoured XI.

Bukayo Saka made it four goals in three games for Arsenal after netting the only goal in a 1-0 win over Leeds and he fits into the midfield three with Mount and Pierre-Emile Hojbjerg after his “outrageous” finish at Elland Road, as described by Crooks.

The one odd choice of the weekend is that Crooks chose Lisandro Martinez, who is going from strength to strength under Erik ten Hag at United, as a left-back.

The Argentinian star has clearly been a fine performer despite United’s disappointing goalless draw at home to Newcastle but only as a centre-back, so Crooks’ inclusion suggests he had simply run out of room at this point.