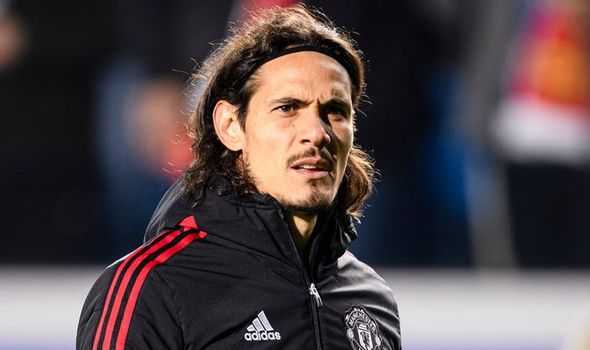 Manchester United striker Edinson Cavani will not play against Manchester City on Saturday after picking up an injury, according to reports. The 34-year-old was widely expected to appear in the first Manchester derby of the season that will see Ole Gunnar Solskjaer’s side host their cross-city rivals at Old Trafford.

Cavani has featured in four of United’s last five Premier League matches and started the 3-0 win over Tottenham in north London last weekend.

He went on to score his first goal of the season against Spurs but also picked up a minor injury that will rule him out of contention to play against City, acording to journalist Rodrigo Romano.

It is claimed that Cavani felt pain in a tendon during the final stages of the match, with the problem also seeing him miss out on a starting spot against Atalanta in midweek.

The issue is said to have caused ‘very severe’ discomfort over the last 48 hours, leaving the veteran forward unable to play on Saturday.

He has reportedly been declared unfit to feature by United’s medical staff and will be recovering from his injury over the next few days.

Cavani will also miss Uruguay’s upcoming fixtures after it was revealed that he would be out of action for ‘medical reasons’ during this month’s international break.

It remains to be seen how United will respond to Cavani’s absence against City, with Solskjaer set to be forced into changing the team that brushed Spurs aside six days ago.

However, the Red Devils have kept a clean sheet against Saturday’s opponents in each of their last three Premier League meetings.

Solskjaer told reporters on Friday afternoon that he is not worried about denting his record against Pep Guardiola, insisting that he is fully focused on helping his side to perform at their best and claim all three points in another formidable test at Old Trafford.

“You look at the next game,” said the United boss.

“I’m not one to talk about what I’ve done. I’ve got great respect and admiration for Pep and what he’s done, we’ve had some good results and tight games.

“We need another performance like this. Sometimes you need luck, we know this game we have to suffer a lot but we have to believe, trust ourselves because we’re at home and have had a couple of good results.”