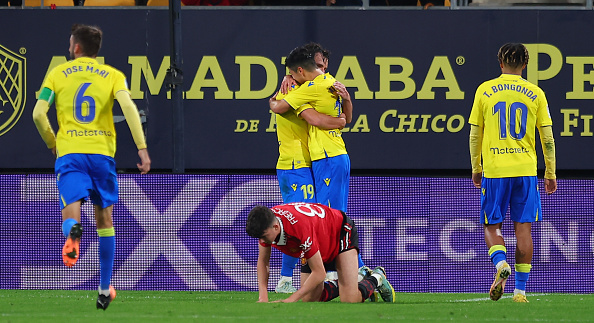 Manchester United’s defence imploded as Erik ten Hag’s side were thumped 4-2 by Spanish side Cadiz in a club friendly on Wednesday.

Carlos Garcia put the home side 1-0 up from a wide free kick after just eight minutes as Victor Lindelof completely mistimed his header, allowing the Cadiz midfielder to dive in low to head back across goalkeeper Martin Dubravka.

Things then went from bad to worse for United as they were again caught sleeping at the back – with Anthony Lozano left completely unmarked and centre-backs Lindelof and Teden Mengi nowhere near one another – as the Cadiz striker gave the Spanish side a 2-0 lead after just 14 minutes played.

That saw United left with a mountain to climb before Erik ten Hag’s side were handed a penalty as Zidane Iqbal combined wonderfully with Anthony Martial, before being brought down inside the box by Cadiz defender Luis Hernandez.

Up stepped Frenchman Martial, who slotted home his spot kick with a cheeky Panenka to make it 2-1 after 21 minutes at the Estadio Nuevo Mirandilla.

Both sides had chances before half-time – with Iqbal and Martial looking particularly impressive for United – but Ten Hag’s side went into the break with plenty to do to turn the game around.

The Dutchman made a whopping 10 changes at half-time, changing his entire outfield and only keeping goalkeeper Dubravka.

Aaron Wan-Bissaka, who has played just four minutes of competitive action for United this term, looked especially off the pace and was replaced along with Brandon Williams, Lindelof and Mengi in what was a shambolic defensive display.

Scott McTominay and Iqbal were also brought off as were Alejandro Garnacho, Donny van de Beek, Anthony Elanga and Martial.

Ten Hag’s changes paid off as Mainoo made it 2-2 just three minutes into the second half – with the ball falling to him on the edge of the box following a half-clearance from a United corner – before his strike left Cadiz goalkeeper David Gil rooted to the spot.

But less than 10 minutes later, Cadiz found themselves back in front with Ruben Sobrino restoring the hosts’ lead as he got on the end of a blistering ball in towards the far post.

Cadiz added a fourth in the 77th minute through Tomas Alarcon, who lofted it over Dubravka’s head after he latched onto a ball which had been miscontrolled by Savage – as the match ended 4-2 to the hosts.