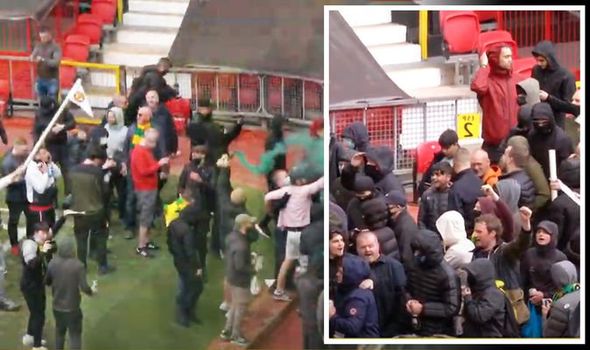 Manchester United supporters are supposed to staging a huge anti-Glazer protest outside of Old Trafford ahead of their clash with Liverpool, with over 10,000 expected to be in attendace. However, they have broken into the stadium and are now on the pitch. Some supporters also gathered outside of the team’s hotel in the city centre, lighting smokebombs and chanting anti-Glazer songs.

United fans are angry because their owners agreed for the club to join a European Super League.

The exclusive tournament planned to pit the best teams against each other on a regular basis without promotion or relegation.

But fans are so furious over the Glazers’ greed that they want them out of the club.

Manager Ole Gunnar Solskjaer was asked about the protest and he said: “It’s important that the fans’ views are listened to and we communicate better. 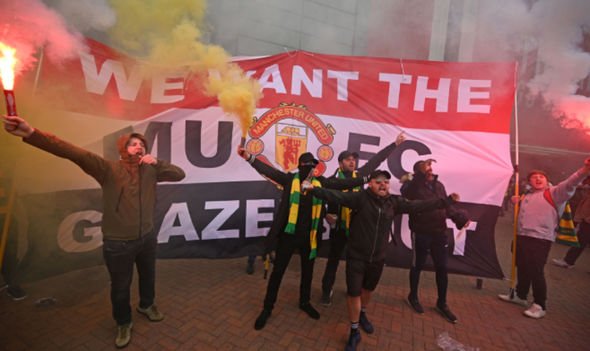 “My job is to focus on the football side and that we have the best possible team.

“As I’ve said before, I’ve been backed, I’ve had great support from the club and the owners and I’m sure I will get the backing again to go one step further.

“But I’m so happy all the clubs have agreed that this shouldn’t be the way of moving forward. Then again, when the protests are on, it’s important they go in a good fashion and that we keep it peaceful.

“The players are focused on the game and nothing else. They’ve handled difficult situations before.

“Of course, it was a strange week before the Leeds game after the Super League announcement.

“But I’ve got to say I’m not worried one second that our mind is not on the football when it happens. I think you saw here in the semi that the players are fully focused on performing.”