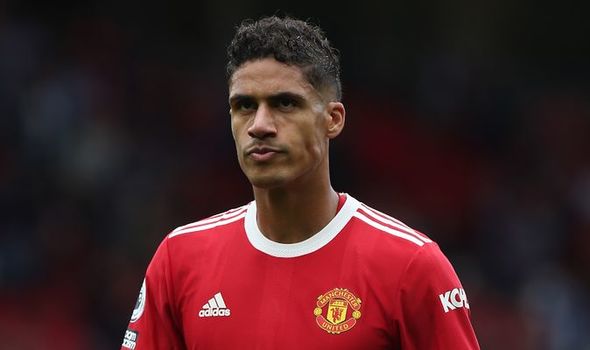 Manchester United have suffered another defensive injury setback as Raphael Varane is now set for a period on the sidelines. The Red Devils have a difficult run of fixtures coming up and the big Frenchman will be a miss for boss Ole Gunnar Solskjaer.

Varane was signed in the summer with Solskjaer keen to acquire an improved partner for England centre-back Harry Maguire.

Neither Victor Lindelof nor Eric Bailly had sufficientily impressed alongside Maguire, prompting a search for a new defender.

Varane was Solskjaer’s top target and arrived at Old Trafford in a bargain £35million transfer from Real Madrid. Los Blancos were keen to offload the 28-year-old from their wage bill.

United’s defence has been slightly improved with Varane despite a worrying recent dip in form.

Solskjaer has used Varane five times in the Premier League and twice in the Champions League. The Red Devils are fourth in the top-flight after seven matches.

But the former Lens man is set to miss some football following an injury he suffered during France’s Nations League final victory over Spain on Sunday.

Varane hobbled off during the first half and was seen with an ice pack on his right leg.

United have now confimed that the player will miss ‘a few weeks’ with a groin muscle injury.

A club statement issued on Tuesday read: “Raphael Varane sustained a groin muscle injury in the UEFA Nations League final and has commenced rehabilitation at the club.