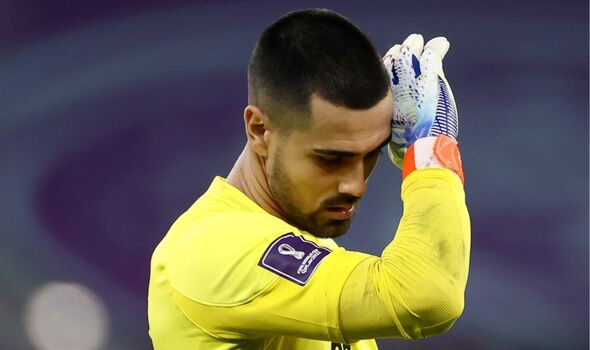 Manchester United’s interest in Porto and Portugal goalkeeper Diogo Costa has not diminished despite his shaky performances at the World Cup in Qatar, according to reports in the player’s homeland. The 23-year-old shot-stopper did not give the best account of himself at the tournament as a host of big European clubs – some of which are from the Premier League – continue to monitor his progress.

Costa made history earlier this season when he became the first ever goalkeeper to save three penalties in the Champions League group stages after stopping two in the same game.

The accolade placed a number of top clubs including Manchester United and Chelsea on red alert as Jorge Mendes looks set to secure his client a dream move.

The Porto No 1 nearly gifted Inaki Williams an unbelievable late equaliser when he dropped the ball for the Ghana striker, who was lurking behind him.

Costa also failed to punch clear as Moroccan striker Youssef En-Nesyri out jumped him to power home a header in the quarter-finals as the Atlas Lions became the first ever African nation to reach the semi-finals.

According to A Bola though, his wobbly performances have not put off potential suitors including Manchester United.

It’s claimed Costa is still extremely popular and attracting plenty of attention ahead of the winter market.

Problematically for United though, the goalkeeper’s new Porto contract contains a release clause worth around £64million.

That is what will need to be paid in order to prise him away from the Estadio do Dragao.

Super agent Mendes is still reportedly poised to ‘open doors’ in the Premier League for his client in due course.

Barcelona are also believed to be monitoring Costa while Tottenham have also been linked with a swoop for the goalkeeper.

De Gea is currently out of contract in 2023 but United do have the option to extend his deal by an extra 12 months.

United boss Erik ten Hag has already hinted that the Red Devils intend to take up the option by triggering the clause.

“We are talking to the players involved, to extend their contracts, but we’re in control, as we have options, and we will exercise those options,” Ten Hag said.

Despite the Dutchman’s satisfaction at De Gea’s upturn in form this season, a new signing between the sticks is certainly not being ruled out by United.

Dean Henderson, who is currently on loan at Nottingham Forest will be keen to stake his claim at the No 1 spot once again while Newcastle loanee Martin Dubravka is expected to return to Tyneside at the end of the campaign.