Former Manchester City captain Richard Dunne says Sunday’s match against Liverpool is “massive” and expects it to have a significant impact on the Premier League title race.

Pep Guardiola’s side are currently 10th in the table after an inconsistent start to the campaign but Dunne believes his former club will have the belief they can push on and regain the title if they win this weekend.

“It’s huge. This game almost decides the season. The two teams haven’t lost a lot of games over the last few years so they know that the importance of the three points in this one is massive,” Dunne told Sky Sports News.

“City go into it after beating Liverpool 4-0 last year but they’ll know that wasn’t the real Liverpool side, they’d already wrapped up the league by then.

“It’s going to be very competitive. I think for City, and for Liverpool as well, they’ll understand how big it is. They’ll understand that everything up to now has sort of been a warm-up for this game.

“It’s not just the result of one game this weekend, this could turn the championship and this could give you the belief to go on a run and try a build a lead, or for City to catch up with Liverpool.

“The players are going to be really up for it and looking forward to it. It’s got the makings of a great game.”

When asked if he expected his former club to win on Sunday, Dunne added: “City need to win. They’re a few points behind Liverpool and I fancy them at the weekend. 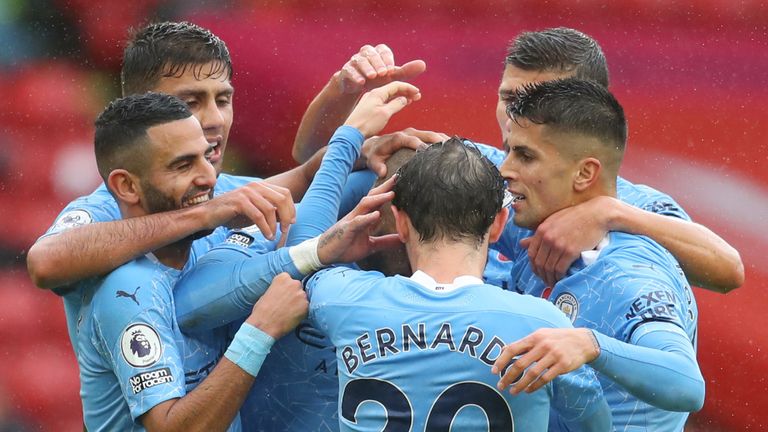 “I think they’re in good form, Liverpool have a couple of problems defensively and I fancy City to take advantage of that.”

Doubts remain over whether City striker Sergio Aguero will recover from a thigh injury in time for the match, although Gabriel Jesus is set to be available after coming off the bench to score against Olympiakos in the Champions League on Tuesday.

Makeshift centre-forward Ferran Torres opened the scoring in the 3-0 win over the Greek side, and Dunne believes the Spaniard could keep his place in the team against Liverpool.

“I’ve been very impressed with Torres playing centre-forward,” he added.

“They signed him to play on the wing but through circumstances he’s ended up in a central position. The way he’s been playing has been really positive for the team.

“He’s been stretching defences in behind and giving them different options. I wouldn’t be surprised if it was Torres who started.

“To have Aguero back would be brilliant and Jesus came back with that goal. Even if you have them two in reserve to come on at some stage in the game, it’s a real threat for Liverpool.

“I just think the fitness and the rhythm of Torres, points to him starting this weekend.”