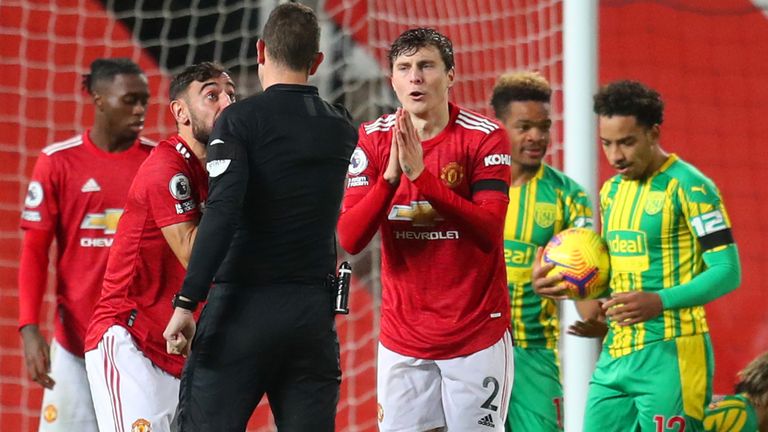 Manchester United were aided by a controversial penalty decision from referee David Coote as they edged past West Brom with a 1-0 victory at Old Trafford.

In a dramatic start to the second half, Coote pointed to the spot having adjudged Bruno Fernandes to have brought down Conor Gallagher. However, despite appearing to be clear contact, the decision was overturned by Coote after he watched the incident on the pitchside monitor at the advice of VAR.

Moments later, Coote pointed to the spot at the other end as Juan Mata’s cross hit Darnell Furlong’s hand. This penalty decision stood and Sam Johnstone thought he was the hero for West Brom after saving Fernandes spot-kick.

However, the visitors’ celebrations were cut short as the goalkeeper, who made a number of fantastic saves during the match, had strayed well off his line, with the VAR ordering a retake that Fernandes lashed into the top left-hand corner.

It proved to be the winning goal for Ole Gunnar Solskjaer’s side, who moved up to ninth in the table with their fourth win of the season.

Slaven Bilic’s side, who will feel aggrieved by the decisions that went against them at Old Trafford, stay in the relegation zone.

Manchester United are back in action on Tuesday when they face Istanbul Basaksehir in the Champions League at Old Trafford; Kick off 8pm.

Related posts:
Basketball News:
Dementia in football: Nikki Trueman calls for more support from FA and PFA
Chelsea ‘definitely’ keen on Lionel Messi transfer if Barcelona star leaves for free
Maro Itoje: England defence coach John Mitchell hails ‘destructive’ forward
MLB News:
Two-time All-Star pitcher Charlie Morton signs one-year, $15 million deal with the Braves
Rams inspire confidence with win over Bucs: 'We can be as good as we want to be'
Tom Brady gets away with bizarre double pass thanks to Rams declining penalty
Recent Posts
This website uses cookies to improve your user experience and to provide you with advertisements that are relevant to your interests. By continuing to browse the site you are agreeing to our use of cookies.Ok