Manchester United have been scouting Bayer Leverkusen centre-back Edmond Tapsoba after receiving a tip-off from a well-respected figure in Germany, Express Sport can exclusively reveal. The 22-year-old, who was still playing football in Burkina Faso for US Ouagadougou in 2017, has emerged as one of the brightest defenders in the Bundesliga in the past year and is also under the watchful eye of two other Premier League clubs.

Tapsoba was snapped up by Leverkusen from Victoria Guimaraes in January 2020 when he cost an initial £15.5million in a deal that could still rise to £21.5m in add-ons.

The Bundesliga club’s recruitment team were enchanted by his confidence bringing the ball out from the back and maturity on the field at such a young age.

Now he is the heartbeat of the Leverkusen defence – that also includes former United academy graduate Timothy Fosu-Mensah – and has played every minute of league action this season, besides the two games he missed due to coronavirus in late November.

His current deal contains a release clause believed to be in the region of £44m and Leverkusen are not willing to listen to any offers below that figure and would like to tie him down to an improved contract. 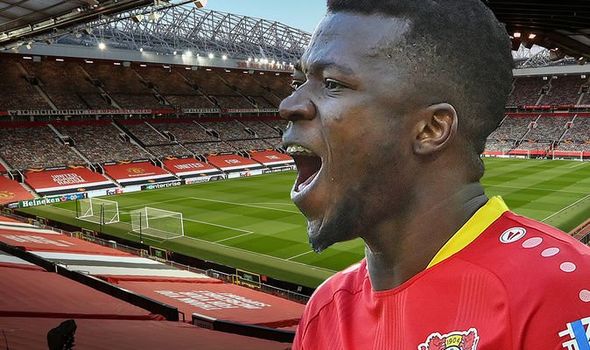 A source has told Express Sport that they reached out to contacts at United last year and advised them to take a look at Tapsoba, having watched him closely since he arrived in Germany 13 months ago.

Their verdict on the defender remains undisclosed but United are considering their options at centre-back, heading into the summer transfer window.

Ideally, Ole Gunnar Solskjaer would like to bring in a left-footed centre-half to partner Harry Maguire with Victor Lindelof and Eric Bailly yet to fully convince that they’re worthy of the role, long-term.

Dayot Upamecano and Nathan Ake were among the names under consideration last summer but Ed Woodward failed to grant Solskjaer’s wish of a new central defender. He is likely to redeem himself when the transfer window reopens.

Tapsoba was the subject of a last-minute enquiry from Liverpool in the January transfer window as the Reds scrambled to bring in defensive reinforcements.

Yet the Premier League champions were told by Leverkusen that they had to pay the £44m release clause in full if they wanted to pursue a deal.

Leicester and Wolves are among those to have watched the player in the past year, something that Tapsoba has been made aware of and the latter are understood to be eyeing a summer deal.

The Foxes have since cooled their interest since completing the signing of Wesley Fofana from Saint-Etienne. 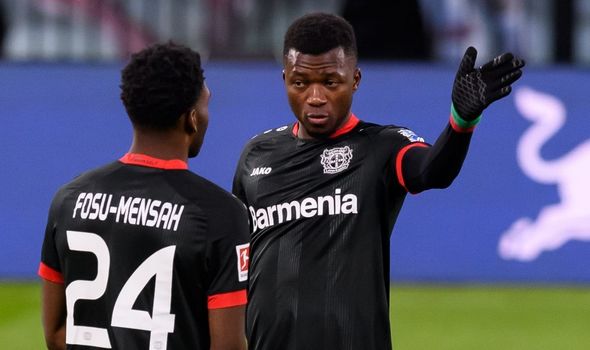 “They (Leicester and Wolves) often sent scouts over,” he said last year in an interview with The Athletic.

“However, I spoke to my mentor Boureima Maiga and he emphasised that it is important that I do not skip any steps in my development. Switching to the Premier League, where I might not play, would not have been a good idea.”

Tapsoba’s willingness to bring the ball out from the back as opposed to kicking it long stems from his unlikely idol: John Stones.

When asked who he used to watch as a kid growing up, Tapsoba named the Manchester City defender when speaking with the Bundesliga’s official website.

“I would say Per Mertesacker, from Germany, is a player that I liked a lot when I was younger,” he said.

“When I started to grow older I liked John Stones a lot too. I watched all the videos on YouTube. I would say that’s what inspired me.

“I also wanted to help my family, because they deserve it very much. They inspired me to work hard every single day.”