West Ham won at Old Trafford for the first time since 2007 as they knocked Manchester United out of the Carabao Cup at the third round stage.

In the second meeting of these two sides in just four days, West Ham made a fast start at Old Trafford and took a deserved lead when Manuel Lanzini steered home a cut-back from Ryan Fredericks in the 10th minute.

Juan Mata struck the bar with a volley from a tight angle while Anthony Martial, Jesse Lingard and Jadon Sancho also saw efforts saved by West Ham debutant Alphonse Areola before the break.

Mason Greenwood was called from the bench on the hour mark and almost made an instant impact but saw his shot saved by Areola – but it was the visitors who came closest to scoring in the closing stages as Andriy Yarmolenko and Mark Noble missed chances to add gloss to the win.

Here are five things we learned as Manchester United crashed out of the Carabao Cup.

The insipid nature of Manchester United’s attack over the first hour was emphasised by the fact that their best chance of the match came moments after Mason Greenwood was introduced to the match.

The 19-year-old made a run from deep to latch onto the end of a long pass and although his shot was saved, it showed that United had been missing a direct runner for the entirety of the match.

Their starting attack of Anthony Martial, Jadon Sancho, Jesse Lingard and Juan Mata spent too much of the first half drifting into the same areas and there were too many square passes exchanged between the forwards.

No one was prepared to make a penetrating run in behind and if they did, there was not the cohesion in United’s attack to find the pass. That changed once again following another introduction, this time of Bruno Fernandes – but you could also argue that Solskjaer waited too long before bringing on the team’s talisman.

As for Martial – his unsuitability as United’s number nine has been clear for some time and this was another anonymous performance in front of goal from the Frenchman.

After eight previous attempts, David Moyes has finally secured his first win over Manchester United since being sacked by the club in 2014.

Moyes has done an excellent job at West Ham, taking the club from a relegation battle to European football, but a victory over United had continued to elude him. 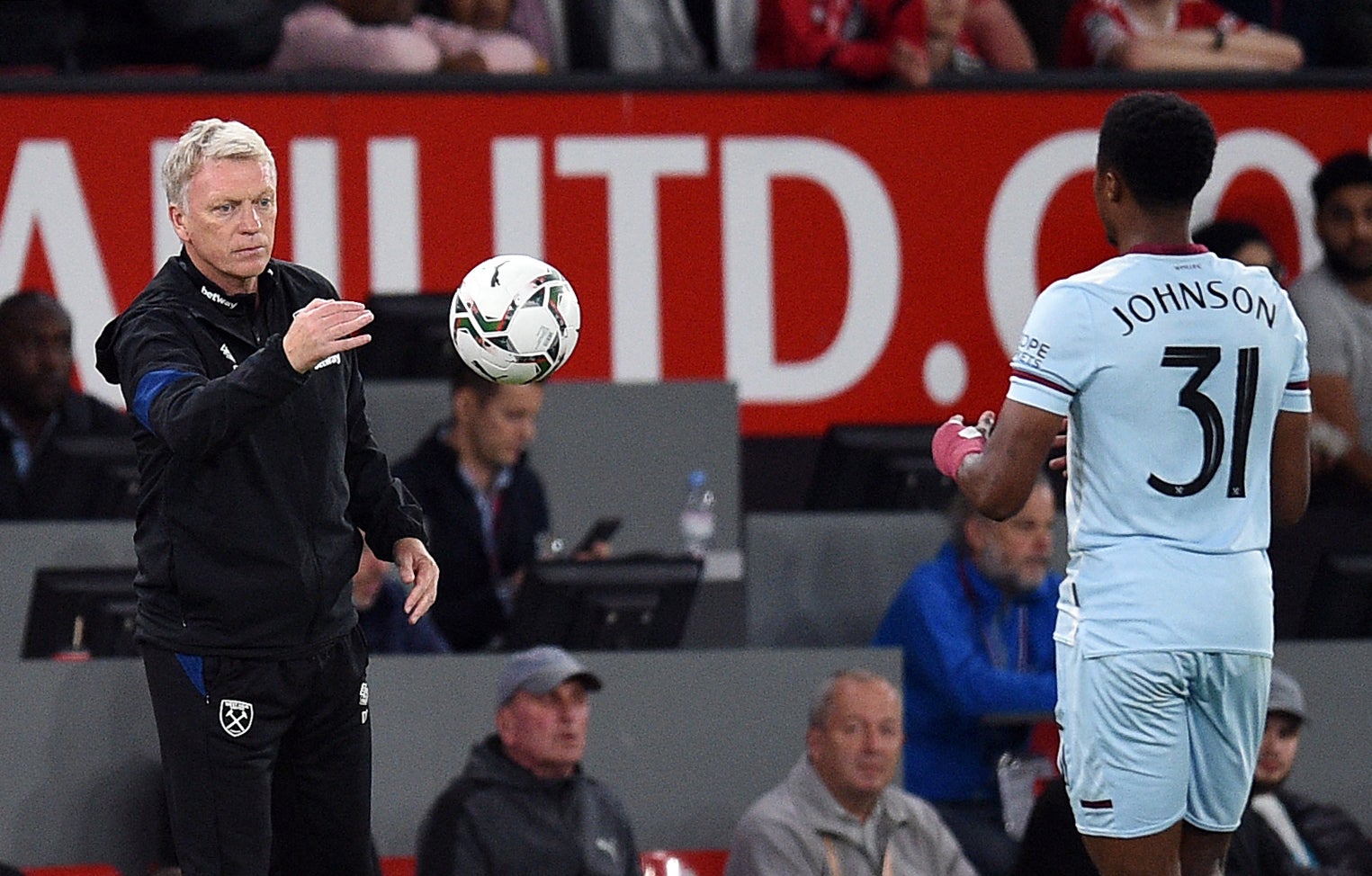 His side pushed Solskjaer’s men until the end on Sunday and were once again involved in an evenly-matched contest at Old Trafford, despite both sides making a number of changes.

West Ham made an aggressive start and caused the hosts problems with their direct running and by committing players forward, and deserved their lead when it came following Fredericks’ run and Lanzini’s composed finish.

It was the best we saw from West Ham in an attacking sense, with the visitors happy to defend deep in order to deny United space and frustrate Solskjaer’s side. Issa Diop was a rock in the centre of defence while Craig Dawson was also solid on his return to the team.

West Ham faced 27 shots but rarely looked like conceding and although they were denied a second goal on the break in the closing moments, the club held on for their first win at Old Trafford in 14 years and a hugely significant win for both club and manager.

It’s still yet to click for Jadon Sancho at Manchester United but there were certainly glimpses here that he is starting to build relationships and an understanding with his new teammates.

Too often against West Ham, United’s players passed the ball to Sancho before standing back and expecting to do something on his own. But it was in the moments of interplay, such as in the one-two with Martial and running onto the end of a scooped pass from Mata, that saw Sancho create goalscoring opportunities. 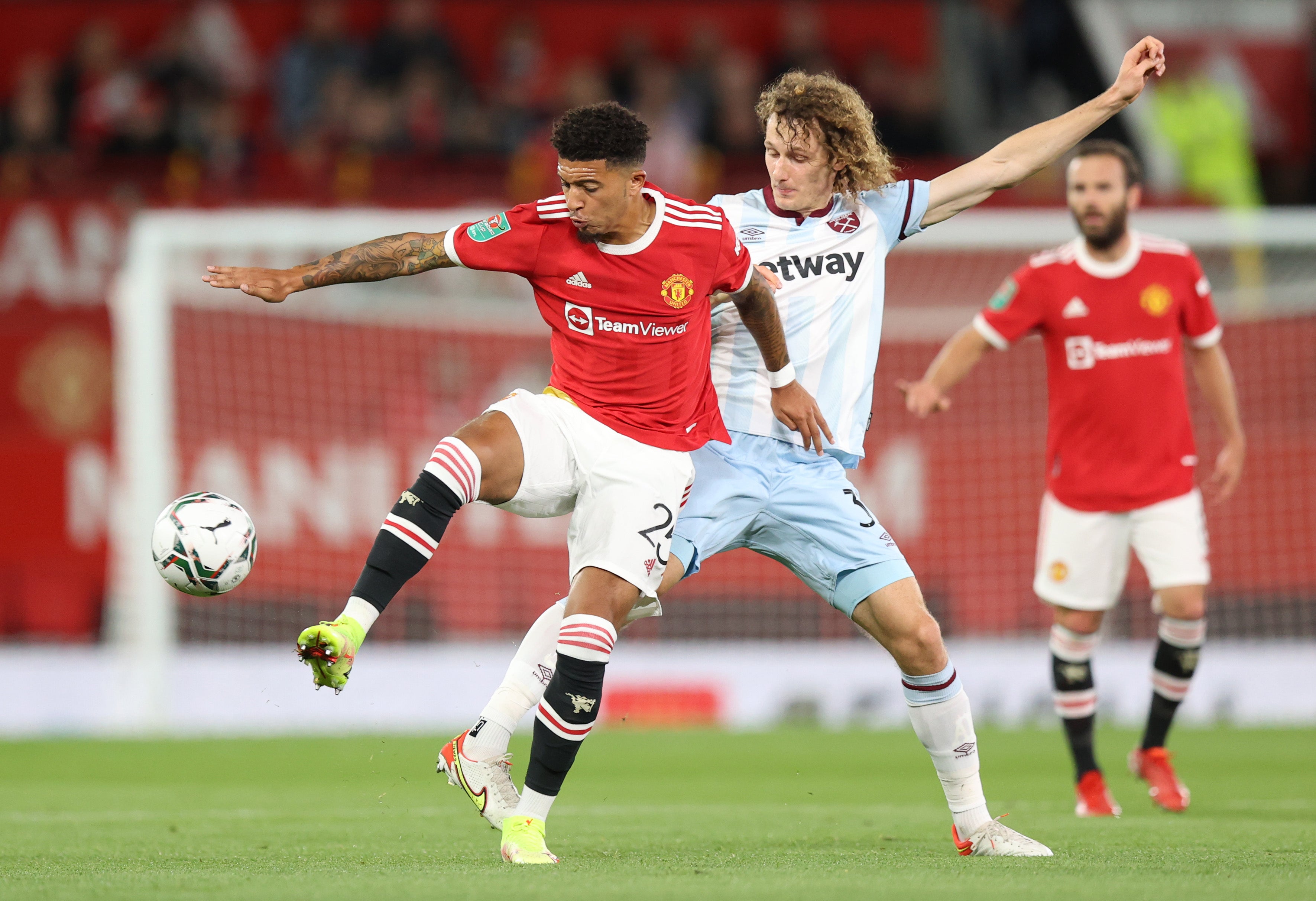 At Borussia Dortmund, the 21-year-old was at his best when combining with his fellow attackers but Sancho has yet to be given a consistent run in the team in order to show that since his move from the Bundesliga side.

Sancho needs more time to develop those patterns but it would also help if there was more consistency in terms of who was around him. Sancho’s latest start again came on the left wing, which adds to the questions that are being raised of Solskjaer that he is yet to give the England international the proper platform to perform.

Jarrod Bowen was the odd one out at Old Trafford – as the only player to keep his place from the 22 players who started at the London Stadium on Sunday.

The fact that the highly-rated 24-year-old forward retained his position up front for Moyes’ side perhaps speaks to the lack of depth behind top scorer Michail Antonio, who was rested ahead of West Ham’s trip to Leeds this weekend.

Moyes could have also been keen for Bowen to get off the mark this season. The former Hull City player has racked up nine shots in the Premier League this season without finding the back of the net.

Bowen’s tendency to pop up in goalscoring positions was again on display early on as pulled into space to receive Andriy Yarmolenko’s cut-back – but he lacked the finishing touch as he dragged his shot wide of the near post. He also missed the target from two yards out near the end of the half – although his blushes were spared after he was given offside.

Bowen’s goal is coming but Moyes will once again have been delighted by his forward’s general play. If he discovers his finishing touch he will become an even more valued player in the Premier League.

Alex Telles was handed his first minutes of the season following his return from injury – and his lack of match sharpness was on display in the opening exchanges as West Ham created two clear chances down his side of the pitch.

The left-back was brushed aside by Yarmolenko as the Ukraine international latched onto a bouncing ball, with the winger then setting up Bowen for a shot which the forward dragged wide in the fourth minute of the match.

That should have been a wake-up call but Telles was again exploited moments later, this time by Fredericks, as the West Ham made a bursting run inside the box before cutting the ball back to Lanzini to sweep into the net.

Telles did not look switched on in those opening moments and it proved costly.