In hindsight, it was easy for Ole Gunnar Solskjaer to see what went wrong in Bern. “We should have done better with the ball, maybe,” he said after a red card and stoppage-time defeat to Young Boys started Manchester United’s new Champions League campaign in the worst possible way. “We could have spread out more, maybe sent one of the midfielders higher up in support of Cristiano [Ronaldo] because he was lonely up there.”

Red cards do not have to equal white flags but United waved one from Aaron Wan-Bissaka’s dismissal onwards. And in correctly identifying the major issues with their response after going down to 10 men – not enough patience in possession, not enough of an outlet up front – Solskjaer was echoing what just about every United supporter was saying after the final whistle went at the Wankdorf.

Hindsight is 20:20, of course. It is easy to pick apart poor performances or managerial decisions after the fact. That is a point that Solskjaer has repeatedly made. “Harry Hindsight is a very good player,” he reiterated afterwards when revisiting Jesse Lingard’s back pass to Jordan Siebatcheu which set up the stoppage-time winner. “Of course, if Jesse got that chance again he’d turn, swivel and boot it the other way, but he’ll learn from it.”

Foresight is the art of management, though, and that is why it is such a difficult job. Consistently winning football matches means anticipating the direction of any particular game, predicting how an opponent will change their approach then reacting accordingly. There are several alternate realities where United make the same changes as they did in Bern on Tuesday night and draw, or even win.

Perhaps Lingard doesn’t mistakenly play a back pass into his own penalty area. Perhaps Ronaldo wins a penalty and earns a sending off for Mohamed Camara at the start of the second half. Perhaps Wan-Bissaka is a second quicker to the ball before his game-changing challenge on Christopher Martins and, as a result, he is not shown a red card. Any one of those incidents going United’s way could have brought about a very different result.

Every match is full of these tiny sliding doors moments, though, and the distinguishing feature of the very best teams and managers is how they react to them in real time. Even if several of those moments go against them, they turn them to their advantage. But for all the good work Solskjaer has done with United over the past few years, he still has to prove that he can be relied upon to react quickly to save or change a game. 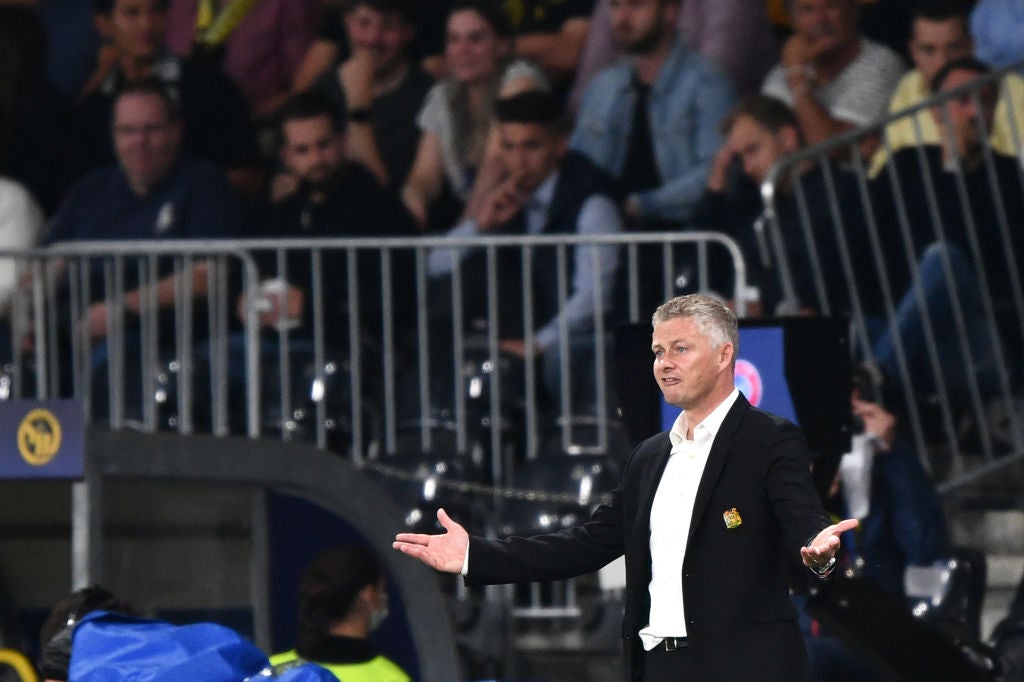 Despite us only recently starting the new season, some managers have already shown they can do just that. Chelsea went down to 10 men away to Liverpool a few weeks ago yet held onto a point, not conceding after Mohamed Salah’s penalty after Reece James’ goal-line handball. Thomas Tuchel shut the game down and settled for a point. Why could United and Solskjaer not at least do the same, against supposedly weaker opposition?

In fairness, no team or coach is perfect on this front. It was a very different story for Tuchel and Chelsea back in April when Thiago Silva’s sending off against relegation-bound West Bromwich Albion led to a 5-2 home defeat that practically nobody predicted. The difference between that West Bromwich defeat and United’s in Bern on Tuesday night, though, is that Chelsea’s stands as something of an anomaly.

United may have won plenty of points from losing positions under Solskjaer – more than any other team in the Premier League last season, in fact – but there have still been a lot of games where they have suffered setbacks and the bench has been slow to respond. That has particularly been the case in Europe. The Gdansk final in May saw a reluctance from Solskjaer to use his bench, as did the semi-final against Sevilla the year before.

In Bern, United were posed a question by Wan-Bissaka’s red, which capped off a difficult first 35 minutes for the United right-back. It required a tactical rethink but Solskjaer’s changes only seemed to invite more pressure onto his players, particularly when Ronaldo was replaced. United were suddenly deprived of any genuine outlet to relieve the pressure which came their way.

Solskjaer defended his decision to replace Ronaldo, insisting that it was “the right moment to take him off” and that United have to “look after” him physically. Still, it felt telling that he was otherwise openly picking apart his own gameplan in the post-match press conference and conceding that United had room for improvement. It was an admission that the response to Wan-Bissaka’s red card could have been better.

Again, hindsight is 20:20. It is one thing to diagnose the problems in a performance after the final whistle, as fans and especially us journalists well know. It is another to identify and solve them with only the help of your backroom staff during the thick of the action. United have struggled with exactly that under Solskjaer on several occasions. Until they improve at in-game management, results like this one against Young Boys will become less and less of a surprise.