The Matildas are set for a showdown with the United States, Sweden and long-time rivals New Zealand at Tokyo 2021, while Graham Arnold’s Olyroos have also been handed a nightmare draw for their first appearance in three Olympic cycles.

More than a year after they qualified, Australia’s men’s and women’s football teams finally found out on Wednesday night who they will face at the Olympic tournaments – and luck wasn’t exactly on their side. 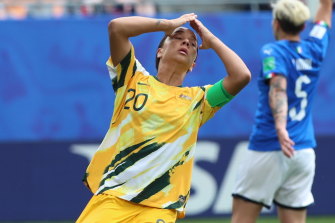 Sam Kerr’s Matildas have landed in a tough Olympic group.Credit:EPA

Still reeling from their heavy friendly defeats to Germany and the Netherlands earlier this month, the Matildas landed in Group G with the United States, Sweden and New Zealand.

The US are the reigning World Cup champions and one of the most formidable teams in world sport, Sweden were silver medalists at the 2016 Olympics, and the presence of long-time rivals New Zealand adds an extra edge to what shapes as a supremely difficult pool.

To advance to the knockout stage, the Matildas need to finish in the top two of their group or as one of the two best third-placed teams in the tournament, making their first-up clash against New Zealand on July 21 extremely critical.

Coach Tony Gustavsson is a former US national team assistant and may have some handy intel on them as well as his home nation, Sweden, and given the current state of the Matildas, they’ll need every bit of help they can get to reach the podium.

Arnold’s Olyroos, meanwhile, are in Group C with Spain, Argentina and Egypt, pitting them against two of the strongest nations in the men’s game and one of African football’s most overlooked powers.

Unlike women’s football at the Olympics, the men’s tournament is traditionally an under-23s affair, although the age exemption was loosened by a year after the Games were postponed due to COVID-19 to give the players who secured qualification a chance to play in Tokyo.

But teams also have the capacity to call upon three over-age players, so long as their clubs agree to release them. Arnold is unsure if he will do so, but Spain, Argentina and Egypt could all use theirs on some of the world’s biggest stars.

The Olyroos will need a top-two finish to secure a quarter-finals berth and, despite the emergence of some extremely promising young players in the A-League this season, it already looks beyond them on paper.

For Arnold, who successfully steered the team to their first qualification since Beijing 2008, the Olympics will be less about results and more about exposing Australia’s next generation of players to the pressure of a high-quality tournament and, ideally, putting them on track for long, fruitful club careers.