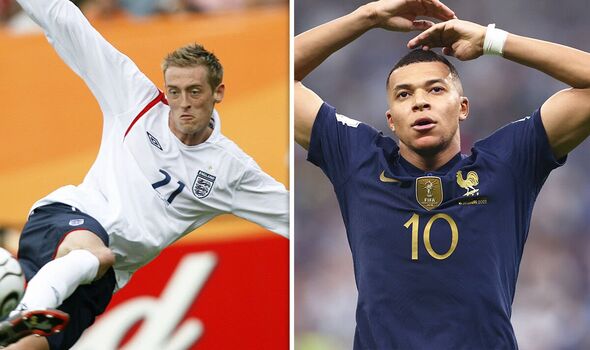 Peter Crouch has jokingly called out Kylian Mbappe following his World Cup final hat-trick. The former England striker took to social media with a cheeky remark about the France superstar.

Mbappe became the first player since Geoff Hurst in 1966 to net a treble in a final. He almost single handedly won it for France after Argentina twice thought they had sealed victory.

He scored twice in the space of a minute to take the game to extra-time. The 23-year-old netted a second penalty in the added-on period to take it to a shootout.

But his France team-mates were unable to get their team over the line. The second of Mbappe’s three goals was his best.

Just moments after converting a spot kick, he volleyed powerfully across Emiliano Martinez in the Argentina goal to draw the game level at 2-2. But for Crouch, it was reminiscent of an attempt of his own over 16 years earlier.

He posted a picture of him volleying the ball towards goal from the 2006 World Cup. Alongside the image, he wrote: “Incredible from Mbappe but I was doing this s*** in 2006.”

However, a still image only tells half of the story. Mbappe’s strike was enough to beat Aston Villa stopper Martinez.

But what Crouch failed to disclose was that his strike went horribly wide. In a group game against Trinidad & Tobago, David Beckham put in an inch-perfect cross.

Crouch was just eight yards out from goal and completely free in the box. But his acrobatic effort went harmlessly well wide of the goal.

He did make up for it later in the game, scoring the opener as England went on to win 2-0. But knowing he got one over Crouch will be no relief to Mbappe after the heartache of Sunday’s final.

Mbappe did finish the tournament as the top goalscorer with eight to his name. He just beat Lionel Messi to the Golden Boot.

However, it was Messi who left the Lusail Stadium on top of the world. The superstar forward finally added the World Cup to his long list of career honours to further enforce in many people’s eyes that he is the greatest player of all time.

Mbappe has now scored 12 goals across two World Cups, four behind the all-time top scorer at the finals, Miroslav Klose. Crouch’s 2006 strike was the only goal he registered at the tournament.