Melbourne City’s A-League team is purring along nicely with two wins from three games and has the chance to push further up the table when it hosts battle weary Perth Glory, playing their third match in eight days, at AAMI Park on Sunday night.

The club’s W-League team is, however, in an altogether different place. Last year City’s talented line up took out the title, the club’s fourth in five years, but faces an uphill struggle to retain the crown this time around having lost the vast majority of the players who brought it the championship in 2020. 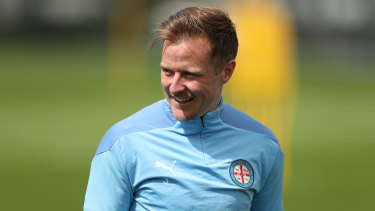 The W-League side hosts Brisbane Roar, 6-0 conquerors of Melbourne Victory in their previous game, in a curtain raiser at AAMI Park on Sunday for the A-League clash. Coach Rado Vidosic knows that nothing short of all three points will be essential if City’s women are to hang on to the coat tails of the league’s front runners Sydney, Adelaide and Canberra.

In the men’s game City coach Patrick Kisnorbo’s hand has been stiffened by the return from injury of one of the stars of last season’s finals campaign, Nathaniel Atkinson, and from suspension of captain Scott Jamieson.

The latter was sent off in the 2-0 loss to Adelaide which punctuated City’s opening-round win over Brisbane Roar and last week’s late show against Western United, when City came from a goal down and showed plenty of resilience to seal all three points with an 84th-minute Jamie Maclaren winner.

Kisnorbo says the pair are both ready to play 90 minutes if necessary – although that is not likely to be the case.

“‘Jamo’, there is nothing wrong with him. Nathaniel has done a six-to-seven-week rehab and he is ready to go,” Kisnorbo said on Saturday morning.

“Nathaniel started as a midfielder, but I think his position for me is probably as a full back. What his strengths are are really as a full back, although he can play as a winger, or across the back four. We are lucky to have his versatility.”

Kisnorbo revealed that his new Portuguese signing Nuno Reis will do his first training session with the team on Sunday having just got out of quarantine and that he will travel to NSW for the two games City have against league leaders Central Coast on Wednesday and Newcastle Jets on Sunday.

He is not taking too much from Perth’s last few wild games.

“Perth are an experienced team and they have got some threats but it is more about us and what we do for tomorrow’s game. I don’t read too much into how they have conceded 10 goals in the past three games [a 5-3 win against Adelaide, a 5-4 defeat against Western United and a 2-1 loss to Melbourne Victory]. They have got some good players front and back.”

Glory skipper Diego Castro is likely to be back in the line-up for Perth having missed the first two games of their eastern seaboard swing, but coach Richard Garcia could be without key forwards Andy Keogh and Nick D’Agostino.

“Andy is struggling a little bit and Nick D’Agostino has also pulled up a little bit sore,” Garcia said as he mooted line-up changes for this game.

Bruno Fornaroli was a fan favourite during his time at City, but after the rollercoaster of the past few weeks just wants his team to tighten up at the back.

“I would like to see a clean sheet this weekend, because I know if we keep the clean sheet, we will score at some moment.”

In the W-League contest Vidosic believes he will, for the first time, have almost all his first-choice players available.

There is still a doubt over Jenna McCormick, the Matildas defender who missed the recent defeat in Adelaide because of concerns over concussion. She has been cleared of that condition and she will be given every opportunity to make the team.

Vidosic will also have at his disposal for the first time 21-year-old Norwegian youth international midfielder Noor Eckhoff, who has come out of quarantine and been working with her new team-mates.

“Her experience and quality will help us in this game. We will be more stable and have a greater midfield presence. She’s a strong, physical girl and our young players will benefit having someone like that around them,” the City W-League boss said.