Rotherham United spoilt the party at Adams Park as an injury-time Michael Ihiekwe winner meant Wycombe Wanderer’s first ever game in the second tier of English football ended in defeat.

The centre-back rose unmarked to head in Joe Mattock’s 92nd minute corner to inflict a cruel defeat on the Chairboys who deserved something on a historic day for the club – their first game at this level in their 133-year history.

It had been a hard-fought affair between two teams both promoted from League One last season at an empty Adams Park, which surely would have been packed and rocking had fans been allowed in.

There were parallels between the teams before kick-off as not only were both playing in the Championship following promotion but both were doing so following up EFL Cup defeats on penalties in the previous week.

Wycombe boss Gareth Ainsworth, the second-longest serving manager in the football league, made four changes from that 10-man defeat at Brentford, with Dominic Gape suspended having been sent off in that game. He was replaced by Alex Pattison in midfield while new signing Daryl Horgan was handed a start in attack after coming off the bench at the Brentford Community Stadium and scoring. 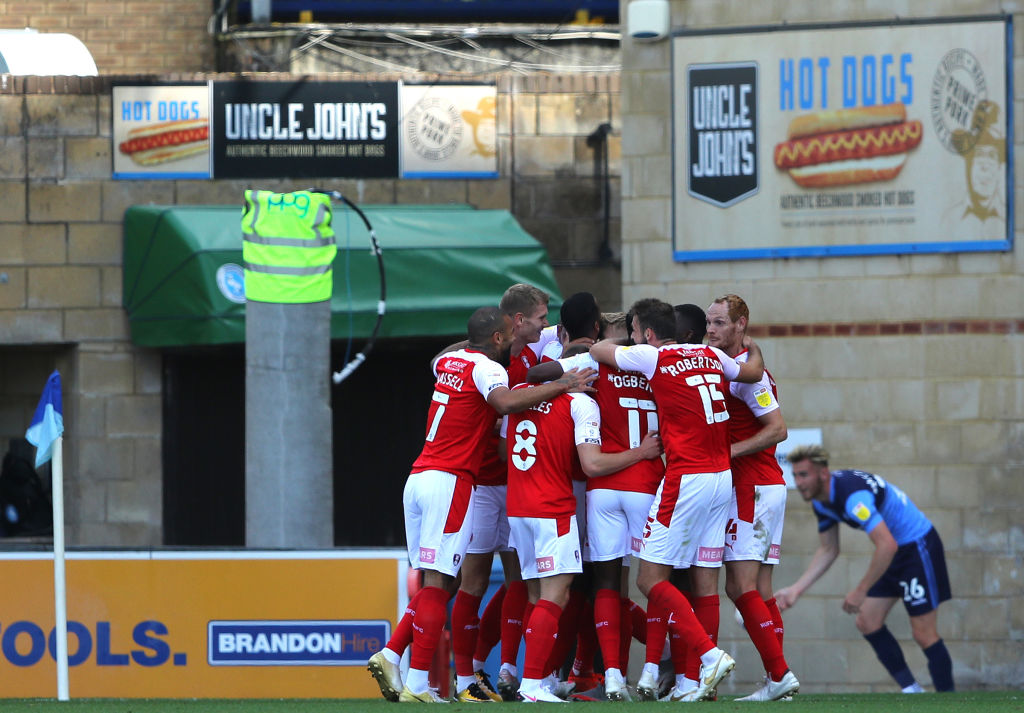 Wycombe, who hadn’t lost to Rotherham since 2001 in nine appearances going into this opening day clash, could have had the perfect start to life in the Championship after just two minutes as Kashket – who missed a large chunk of last season after being banned for betting offences – latched onto a routine clearance and outpaced Ihiekwe before squaring to Hogan who fired just over on the stretch.

The Rotherham defence did not look comfortable against the long ball and Kashket’s pace caused them plenty of problems early on as Joe Jacobson, making first Championship appearance in 14 years after playing 12 minutes for Cardiff in 2006, almost caught Blackman out with a looping free-kick from the halfway line as Wycombe started strongly.

Rotherham’s first effort on goal saw a Kieran Sadlier free-kick 10 minutes in tipped round the post by Ryan Allsop for a corner which Ihiekwe headed over before Wycombe’s Matt Bloomfield picked up the game’s first booking after 21 minutes for a tough challenge on Shaun MacDonald.

The away side grew into the game with Chiedozie Ogbene giving Jacobson trouble on the right and having a shot blocked in the box as the game started to stretch, but neither side were able to make any of their chances count in a first half that was simultaneously frantic and nervy.

Ten minutes before half time Darius Charles rattled the Rotherham bar after a Jacobson free-kick had caused havoc in the box before Blackman did well to gather Pattison’s low drive and Wycombe ended the half strongly but without scoring.

Rotherham boss Paul Warne made the first substitution of the game five minutes into the second half as Smith replaced Crooks but it was the home side who came close again as Bloomfield was invited to shoot from distance but dragged it wide.

The second half became a scrappier affair that the opening 45 minutes with little action of note as the realisation for both teams they were creeping closer towards an opening day point became apparent.

Ben Wiles was introduced for Sadlier for the away side while Freeman replaced Bloomfield for Wycombe and as the clock ticked into the final 20 minutes as Ogbene picked up the second yellow of the game for a late challenge on Onyedinma.

Freddie Ladapo toiled hard for the Millers up front njm but found every route thwarted by Anthony Stewart who was imperious for Wycombe at the back and easily man of the match.

Kashket, a constant thorn in Rotherham’s side, thought he had opened the scoring – and Wycombe’s first ever goal in the second tier – on 79 minutes after meeting David Wheeler’s flick-on but his lob over Blackman was cleared off the line by Wes Harding.

It looked like that would be the closest either team would come to getting a goal before Ihiekwe nodded home to leave Ainsworth and co disappointed.