Report and highlights from the Sky Bet Championship clash between Middlesbrough and Brentford at the Riverside Stadium as Ivan Toney scored twice in a comeback win for the Bees that saw them extend their unbeaten run to 20 games.

Brentford extended their unbeaten run to 20 Championship matches by coming from behind to beat Middlesbrough 4-1 at the Riverside Stadium.

The Bees recovered from a goalkeeping error and David Raya’s own goal inside three minutes to climb back into the top two and close the gap to leaders Norwich to a point with a game in hand.

Middlesbrough, who missed out on an opportunity to climb into the top six, had their chances too but Raya was in the mood to make amends with a string of fine saves to leave the hosts frustrated.

The division’s top scorer Ivan Toney levelled seven minutes before the break and once Vitaly Janelt put Thomas Frank’s side in front in the 58th minute there was no way back for Boro. 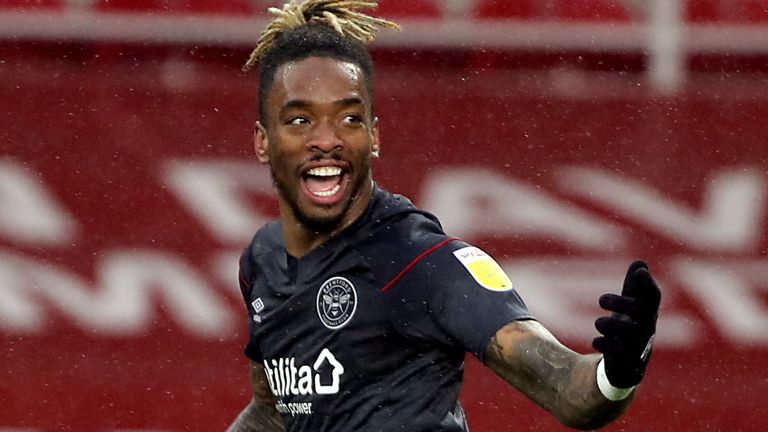 Paddy McNair’s slip in heavy rain gifted Mathias Jensen with Brentford’s third in the 64th minute and Toney added his 22nd goal of the season with 10 minutes left.

Neil Warnock was well aware of the Brentford threat, but the Middlesbrough boss wanted a victory of his own to climb into the top six and handed deadline day signing Neeskens Kebano his first start following his arrival on loan from Fulham.

Kebano and the impressive Yannick Bolasie were soon involved to push Middlesbrough on, earning a couple of early corners.

It was from the second of those that Middlesbrough took the lead. Darnell Fisher’s delivery was missed by Raya, the ball bounced off Ethan Pinnock and it clipped the goalkeeper’s leg and bounced into the net.

It was the perfect start for the home side, although Brentford were frustrated to have a penalty appeal waved away almost immediately after when Henrik Dalsgaard went through and down in the area.

Tariqe Fosu went close a couple of times, although goalkeeper Marcus Bettinelli was rarely tested in that opening period.

The nearest the Bees came before the break was when Saman Ghoddos rolled Jonny Howson in the area to create an opening but his shot trickled wide of the far post.

Ghoddos also had a free-kick parried away by Bettinelli after Sergi Canos was brought down by Fisher right on the edge of the area moments before the equaliser.

After Middlesbrough’s complaints of some strong challenges, Brentford turned defence into attack quickly. Dalsgaard’s long ball was chested into the path of Fosu by Toney, who ran into the area and was picked out to find the empty net.

Middlesbrough would have still been ahead at half-time had Raya not turned Britt Assombalonga’s effort on to a post. George Saville should have done better with the rebound.

Raya continued in that form after the break. He made a point-blank save from Assombalonga again with his left leg and then was just as impressive to deny Janelt from scoring a second own goal of the game.

And with the hour approaching Janelt put Brentford ahead, firing in from outside the area after Toney nodded down Mads Bech Sorensen’s long ball.

It was three six minutes later as McNair’s slip on the wet surface proved costly on halfway, allowing Jensen to run through, round Bettinelli and find the empty net.

And then, after Raya had denied Saville again, the points were well and truly wrapped up when Toney nodded in his second late on after Rico Henry had struck the bar.

Middlesbrough’s Neil Warnock: “I don’t think I have been as satisfied with a 4-1 defeat as that, I look at where we are now and where we were … I would give them a rollicking if needed. We are on the wrong end of a defeat, but I think the fans will be excited now. We go to Derby and this could be the season starting now. That is the start of 18 cup finals.

“But Saville could have had a hat-trick, Britt Assombalonga could have had two, the keeper was probably man of the match with the saves he made. We haven’t made as many chances as that that for a long time.”

Brentford’s Thomas Frank: “It’s incredible to come from behind and to win 4-1, to be fair I don’t think it was a 4-1 game. Middlesbrough deserve praise and there is a reason why they are fighting to get in the play-off positions. The thing is, the team deserve massive praise. To come here against one of the best defensive sides in the division, from a tactical view it is difficult to create chances against their man-marking system.

“We conceded early and we thought it could be a long afternoon with the rain, cold, soft and difficult pitch to play on. That shows a lot of character. But we can’t keep going down 1-0 and we need to learn from that. It shows a lot about the keeper to respond like he did. We needed a top goalkeeper and our goalkeeper is one of the best in the division, possibly the best.”