Report and highlights from the Sky Bet Championship clash between Middlesbrough and Preston at the Riverside Stadium as a Jordan Storey own goal and a second from Marcus Tavernier saw Boro ease past 10-man Preston; Alan Browne was dismissed for North End.

Middlesbrough moved to within five points of the Championship play-off zone by piling further frustration on Preston with a 2-0 win at the Riverside Stadium.

Despite starting the stronger, Preston fell behind in the 22nd minute when defender Jordan Storey sliced a Yannick Bolasie cross into his own net.

To make matters worse for the visitors, referee Oliver Langford sent off captain Alan Browne with nine minutes remaining of the first half for lashing out at Boro’s Sam Morsy.

Browne reacted to Morsy’s arm hitting him in the face after an aerial challenge.

When Preston boss Alex Neil entered the pitch to complain – after the half-time whistle – he too was shown the red card. 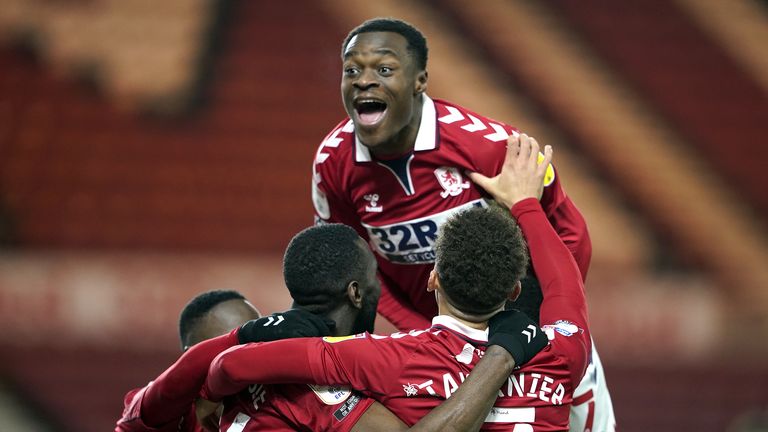 It was hardly the end to the opening period Preston will have wanted having started so promisingly and Marcus Tavernier added a second goal in the 51st minute to help Middlesbrough stay within sight of the top six.

Neil’s demands for an end to an alarming run of form faced an uphill struggle after the restart.

Middlesbrough have to keep winning, so made just one change to the side that beat Stoke last time out, with Djed Spence dropping to the bench.

The man who replaced him down the right, Darnell Fisher, was quick to make an impression. He was also asked questions by his former club too.

Preston were first to go close when Sepp Van Den Berg, on loan from Liverpool, hit the crossbar from 25 yards with a thunderbolt.

But the visitors’ good start came to an end seconds later when Storey tried to clear Bolasie’s delivery into the box and he sliced into his own net by beating Daniel Iversen at his near post.

Storey almost levelled things instantly when his header had to be well saved by Marcus Bettinelli on the line. Scott Sinclair turned the rebound in but he was correctly deemed offside.

When Browne was dismissed for his little kick out at Morsy, and Neil followed him on the red card list after the whistle, Preston knew it would be more difficult after the restart.

Tavernier had already helped create an opening for Paddy McNair to volley against Iversen before the substitute himself scored early in the second half.

McNair’s run and cross down the right led to Chuba Akpom’s first-time effort hitting the crossbar and – from the rebound – Tavernier was on hand to nod the ball down and beyond the keeper.

Grant Hall went close with a header and Tavernier curled an effort just wide soon after as Middlesbrough threatened to score more.

Despite further chances for Neeskens Kebano and Marvin Johnson, there was not to be a third goal – even though Bettinelli had to hold a header from Storey late on.